I don’t have many books on bbq, but one I often reference is Mike Mills’ “Peace, Love, and Barbecue”. The rest of the title, “Recipes, Secrets, Tall Tales, and Outright Lies from the Legends of Barbecue” really sums up the book. If you like reading the stories and recipe of some of the country’s best bbq joints, it’s well worth a look. However, this isn’t about a recipe, this is about the bonus section at the back of the book called “Shrines, Shacks, Joints, and Right Respectable Restaurants Worth a Stop”. In this section, Mills lists, state by state, what he thinks are the best bbq restaurants in the country. Of course, I immediately thumbed to the M’s to see what was listed for . There were only two, Leatha’s in Hattiesburg and a place in Yazoo City called Ubon’s.

Even though it’s only 30 or so miles from home, I rarely find the occasion to drive to . Fortunately, a little while ago, I had to do a business trip to , and I hatched a plan to go to Ubon’s. As with any business trip at the end of the actual business, talks turned to lunch. The locals had suggestions of Mexican food (apparently every town in has a Mexican restaurant), I ignored these suggestions and pleasantly demanded we go to Ubon’s.

Once inside, you’re completely inundated by trophies. Some don’t look that impressive, but then there are some staggering ones. 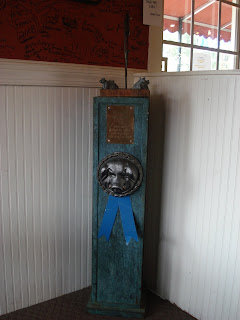 A trophy that size is no small feat. 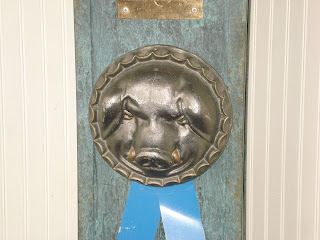 Upon closer inspection, you see that the plaque reads “, Shoulder”. Winning first place in pork shoulder from in May, I’ll admit, I’m impressed and a little intimidated by that pig head.

Being with work company, I couldn’t indulge my desire to try everything on the menu, but I ordered the next best thing, the Belt Buster Combo. 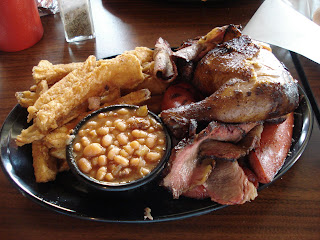 A combination of pork, beef, and sausage with a side of fries and baked beans, this monstrosity of a plate comes with the question: “ever wonder how Jethro died?” I’m not really sure what that’s referencing, but it’s a impressive platter of meat nonetheless.

Working from the top of the pile, I went for the smoked chicken first. 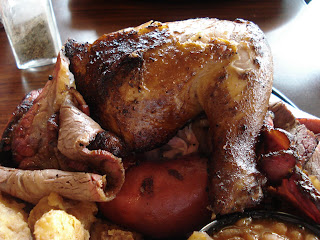 There was a definite smokiness to the meet and it was still quite juicy. Granted, that might have been the inherent quality of the dark meat, but it’s still rare to find a juicy, smoked bird. 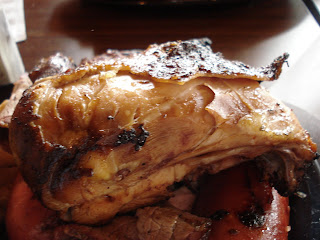 Curious to see how the Ubon’s Barbeque sauce would work with the meat, I dipped a few pieces of chicken in the sauce. I was surprised at how thin the sauce was, but with a nice sweetness and a touch of vinegar, it worked quite well with the chicken.

Sausage at a BBQ restaurant makes me immediately think of . 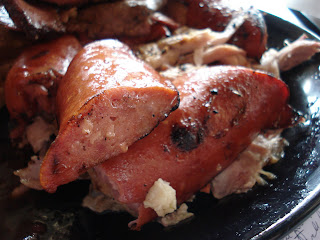 Unfortunately, this smoked sausage had an odd, rather muted taste. There was no real meatiness or smokiness to the meat. Annoyingly, combining it with the sauce didn’t make things any better.

Moving back to a more Southern specialty, I went to the pulled pork. 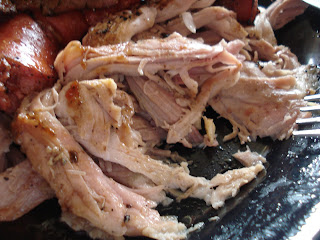 I can immediately see how this won at in May. Each bite was tender, juicy, and full of that wonderful pork flavor. Even better, it seemed like the bbq sauce was made for this pork. It was a sublime combination.

Last on the platter were a few slices of the Beef Brisket. 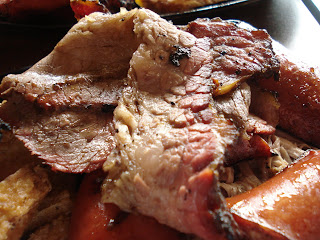 As with sausage, I associate brisket more with bbq than Southern bbq. 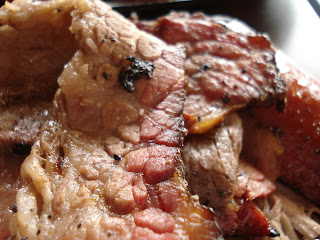 While this was a big, smokey piece of beef, the hickory flavor just didn’t seem to work well for me. I really prefer mesquite with my beef. Like the beef sausage, the bbq sauce didn’t seem to mesh well with this brisket. Apparently the sauce really is more at home on pork.

In addition to the piles of meat on the platter, I got a few sides, the first was the baked beans. 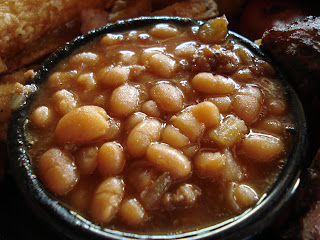 There wasn’t anything too spectacular about these beans, but they did have a lot of meat in them. Actually, meaty and sweet, that’s this order of baked beans in a nutshell.

My second side was an order of the fries. 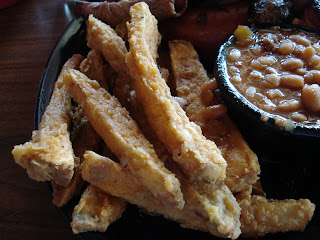 It’s a shame that I didn’t have time to fully explore the menu. Actually, I didn’t have time to fully explore my plate. In between all my eating, talking, picture taking, and writing, I quickly noticed that everyone else had finished. Not wanting to be the odd man out, I asked for a to-go box. Unfortunately, it’s a sad fact of life that left over bbq is never as good as fresh. So while I got a good taste of Ubon’s, I definitely need to go back for further explorations of their menu and award winning bbq.

Thanks for the shout out for PLB and so glad you enjoyed Ubon's. They are TERRIFIC people as well as GREAT cooks. I posted links to this post on our PLB FB fan page and our 17th Street page. Hope that will garner some new readers for you!