Despite being a slowly dying industry, newspapers still prove themselves to be quite useful. For instance a few Sundays ago, I picked up a copy of the Clarion Ledger and happened to see an article about a culinary tour. Seeing as I am interested in anything culinary, I read further to find that The Fairview Inn’s Sophia’s Restaurant is holding a monthly culinary tour. The idea is that two nights a month the restaurant will feature a menu that represents the cuisine of a certain country. Unfortunately, I had missed the first stop, but last Friday I drove to Sophia’s Restaurant to see their take on Spanish cuisine.

Apparently the article had created quite a buzz as the restaurant was decently full by 6:30. Taking a look at the menu, I saw a pretty basic overview of Spanish cuisine, but I didn’t expect an in depth examination from one meal. I had to choose four courses from a choice of five. I immediately made the carnivorous decision and eschewed the salad plate for something a little more beefy.

The first course arrived under the guise of a Tapas course with a Montsarra Cava. 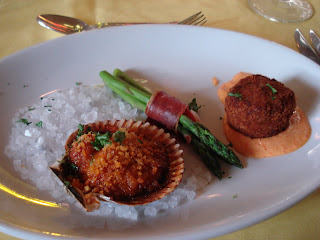 Not exactly what I expected from Tapas, but with a Shrimp Croquette, Asparagus wrapped in Serrano ham, and Galician Scallops au Gratin, it was quite a nice introduction. 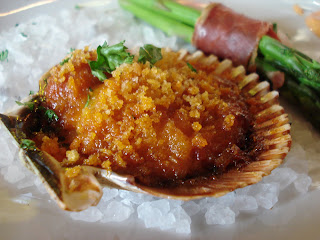 Going for the scallops first, I was immediately a fan of the well flavored au Gratin topping. The scallops were slightly overcooked but they were quite nice and a little garlicky. 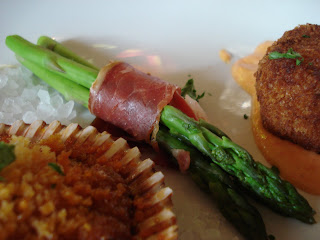 Asparagus is one of my favorite vegetables and it can only be made better by wrapping it in cured pork, but these spears were a disappointing part of the dish. It seemed like the asparagus had been steamed without any seasoning and then wrapped in barely cooked Serrano ham. 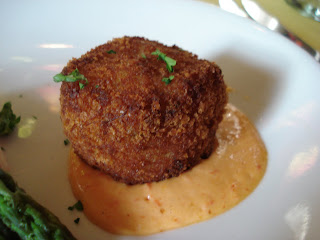 The Shrimp Croquette, after the first bite immediately reminded me of a callas. There was no real visible shrimp meat inside, but there was plenty of shrimp flavor. The red pepper aioli was a wonderful complement and really made the croquette the star of the plate.

Primer Plato or the second course to me came with a choice of Beef Carpaccio with Manchego Cheese or Basque Crab Casserole. As I mentioned earlier, I went for the beef. 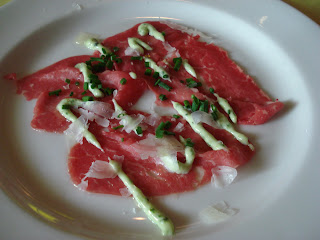 What immediately surprised me was the lack of any sear. I know that Beef Carpaccio is thinly sliced, raw tenderloin but to get past U.S. standards it usually has be seared to kill any nasty bits. 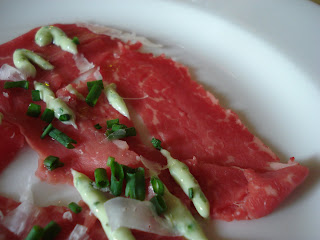 Served with a basil aioli, I was annoyed to discover that the aioli completely dominated the dish. Either the beef was flavorless or it was obscured by the aioli. Even the hearty Manchego cheese was absent from the flavor profile. 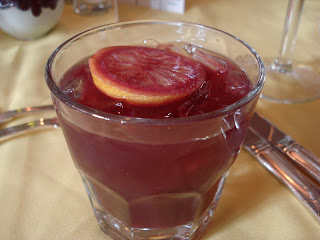 At least the drink for the course, a Homemade red wine Sangria, was pretty tasty.

The third course was titled Pollo & Pescados and presented the choice of a Paella Valenciana, a Grouper Basque Style, or a Chicken Garibaldi, all with a glass of Tres Picos Garnacha. Seeing as Paella simply does not exist in , I knew that would be my choice. 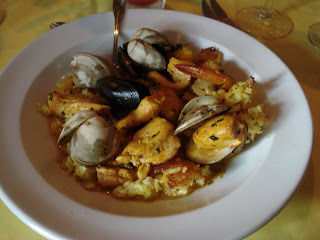 Well, they certainly don’t skimp on the amount of protein in this dish. With mussels, shrimp, clams, oysters, crab, chicken, and chorizo on the menu description, there were a lot of flavors at work here. 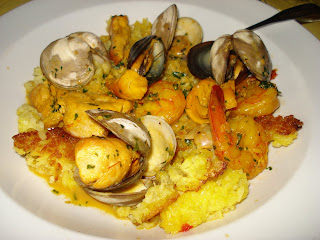 There might have been oysters, crab, and chorizo on the menu, but I certainly didn’t see any. In fact, all I really found was saltiness. Yes, the chicken was overcooked, but I’d overlook that. However, the saltiness was too much and there was no proper way to enjoy this. On the plus side, the seafood was all well cooked, there was sofrito in the dish, and it was generally a good effort, but that saltiness….. It makes me wonder if they used a canned broth.

Dessert, the last course, came under the name Postre, and with a choice of Valencia Orange Flan or Warm Rice Pudding, I went with the flan and the accompanying Alveas Cream Sherry, Montilla. 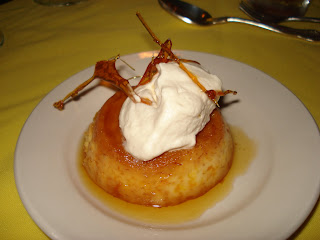 You can’t help but notice the playful look of the caramel, but digging past that I found this to be a well made flan. Syrupy with a subtle orange flavor, it was a nice ending to the dinner, or so I thought. 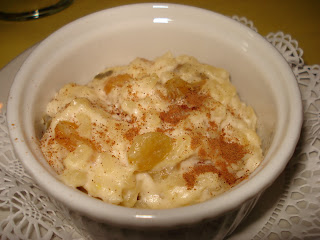 The waitress brought a cup of the Warm Rice Pudding with Raisins and Cinnamon by mistake. Not wanting to let it go to waste, I gave it a try. There was plenty of cinnamon and plenty of raisins, but I don’t understand the appeal of rice pudding. I felt like I was eating well flavored baby food. However, as unappealing at that was, the Sherry trumped that. It was simply too sweet for me to enjoy it at all.

So what were the final impressions of Sophia’s Restaurant Spanish stop on their Culinary Tour? Well, there were some definite hiccups specifically the asparagus and the saltiness of the paella, but overall it was a pleasant meal. Granted, I might be giving Sophia the benefit of the doubt. Why? I’m giving them slack simply because they’re trying something different and with future meals from , , , , , and , I look forward to their takes on these very distinct cuisines.