It’s not often that I make my way out to , but when Sam and I were looking for a lunch spot, I couldn’t think of a better time to pay a visit to Petra Café. I’m not exactly sure when moved from their Old Canton location, but I believe this is the third incarnation of the restaurant. According to their website, Petra Café opened on Old Canton in June 2008. I’m not sure why, but the restaurant was originally named Sphinx; I remember eating there a number of times in 2007 and early 2008. Regardless of past locations and names, owner Ayman Al-Bataineh and his café have setup shop in and I aimed to see if the food was still up to snuff.

Seeing as I had a voracious dining companion, I had no qualms delving right into a variety of appetizers, but first a lovely beverage. 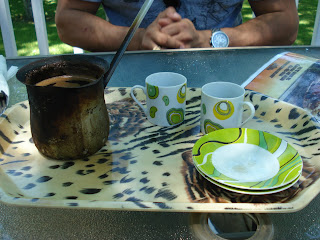 Sure it was 80 something degrees outside, but it’s never a bad time for Arabic coffee. 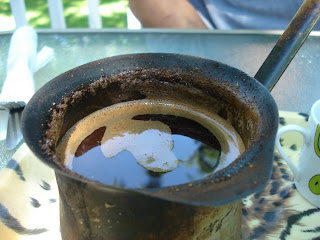 There’s a real richness to the crema in that coffee pot. 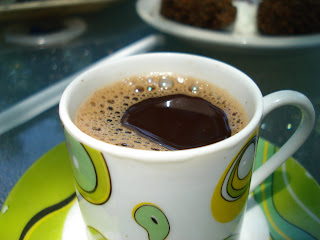 The glasses may not be as traditional as the coffee put but the flavor was excellent. There was a distinct cardamom flavor, a beautiful color and most importantly, no separating.

Since it was such nice weather, we decided to sit outside on the shaded porch. While that made for a lovely lunch setting, the shadows did wreck havoc on some of my pictures. Anyway, the first appetizer to the table was an order of falafel. 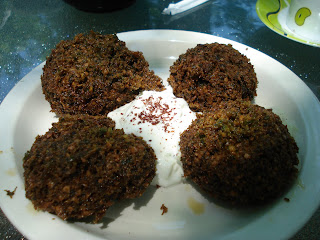 Those look almost hand made or at least not pre-frozen. 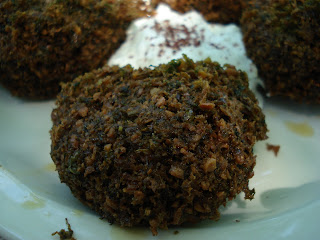 While these were a quality example of falafel, they were quite greasy. 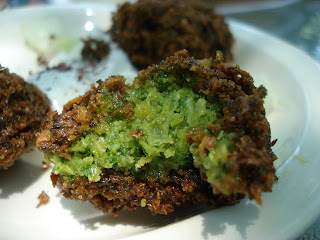 Greasiness aside, these were delectable patties. Each bite was full of a great nutty flavor and that green wasn’t just for show. There was plenty of parsley inside. The accompanying tzatziki sauce was a nice touch, its yogurt base cut through some of the grease of the falafel.

One of my favorite Mediterranean dishes is fried haloumi cheese. 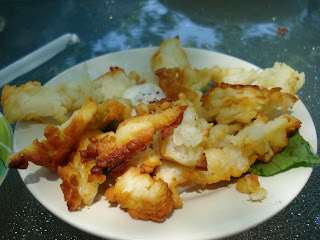 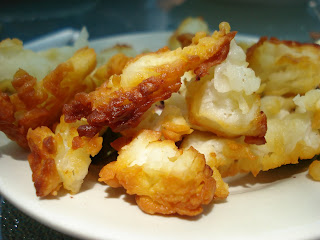 Usually slices of the cheese are pan fried with garlic and olive oil, but this adds a layer of texture to the dish that I wasn’t expecting. Actually this dish was quite salty and I found the lack of garlic and parsley to be a little annoying. While I like the idea of deep frying the haloumi, I’m a fan of the more typical presentation and its juicier approach.

Another favorite, fried kibbeh, rounded out our appetizers. 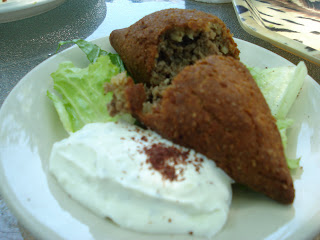 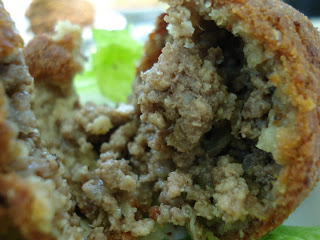 Unlike Jerusalem, this kibbeh was well seasoned and quite tasty. Well fried on the outside and juicy on the interior, Sam and I were taking guesses at the spices they used. I could pick out allspice and cinnamon. Unfortunately there was no real evidence of garlic. Still this is a pretty good kibbeh.

One of the real selling points of Petra Café is the personality. Ayman runs a very customer oriented business and was constantly checking on us and chatting to see how things were and to make the meal more pleasant. On the other hand, I can’t say the service at was quick. After the appetizers there was a significant lull before the entrees appeared.

When the entrees did appear, the grilled meats came on one platter. 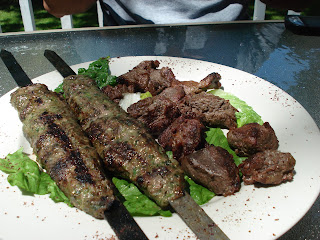 On the left is the Kafta Kabob and on the left the Beef Shawarma. 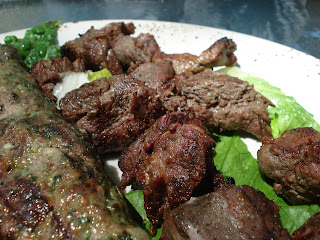 Looking to the Shawarma first, I found each piece to have a huge, beefy flavor but not much else. 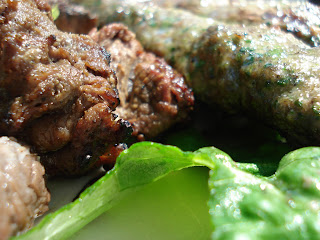 I even found the Shawarma to be overcooked, but Sam was raving about how good these were. Maybe that’s a subtle difference in an American and Arab-American palate?

As much as I was uninspired by the Beef Shawarma, I was in love with the Kafta Kabobs. 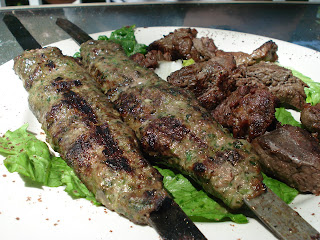 Ayman had proudly told us this lamb was ground fresh for these skewers. I don’t know if that’s the secret but these are some of the best kafta I’ve had. Each bite was beyond juicy and full of parsley. Oddly there wasn’t much onion or garlic or least that I could see. Still, the kofta alone was worth the trip.

That should have been enough for lunch, but when I saw Hummus with Lamb on the menu, I knew I had to try it. Truthfully, I wanted to see if this version was any different from what Jerusalem Café sold as “Israeli Hummus”. 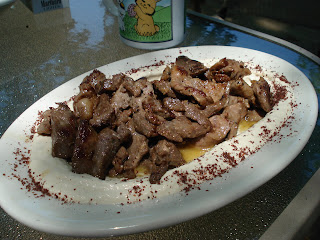 Well, it’s amazing how good a dish can be when you use quality lamb. What had been a throw away dish at was one of my favorites here. It’s that combination of big, tender chunks of lamb and creamy hummus that made me use the entire basket of pita bread.

There aren’t many choices for Mediterranean food in , well not very many good choices. I’ve really found that each location has a few dishes they do well and a number they do on a poor to mediocre scale. Petra Café is no exception to this rule. They do serve dishes that are average at best, but I’ve yet to have a completely poor dish at any of Ayman’s restaurants. Even better, does a number of things quite well, and I wouldn’t hesitate to make the drive just for the Kofta Kabob, but a side of Hummus with Lamb never hurts. So make the drive to , enjoy some lamb, and a bowl of shisha. Finish it off with some quality coffee and you’ll wonder why you don’t do this more often.