Before hitting the road for Jackson, I decided that a Buford Highway lunch was in order. I had it in mind that I would enjoy a nice bowl of pho and maybe an eggroll or two, however, Jennifer and her lack of enthusiasm towards Vietnamese food shot a few holes in that idea. Striving for something that would appease both parties, I proposed Ming’s Bar B.Q.

Situated in the same shopping center as Quoc Huong and the 99 Ranch supermarket, Ming’s Bar B.Q. is known for its char sui, roast duck and other deliciously roasted items. Obviously I wanted to try the bbq pork, but what else? It took a few minutes, but we eventually decided on a few dishes that would hopefully give us a broad overview of the menu.

The first dish on the table was an order of Chow Fun with Beef and Black Beans. 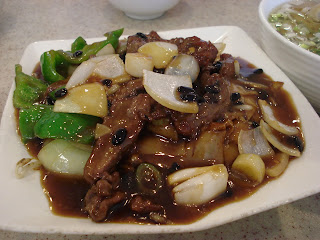 Everything was there: fat, greasy, chow fun noodles, big tender pieces of beef, and a delicious thick sauce. Sure there weren’t very many slices of beef, but it was tender and delightful.

Having ignored my lesson from Bo Bo Garden, I asked the waiter for a recommendation. Looking to balance the rest of our order, he suggested the salt and pepper tofu. It sounded great. I love fried tofu, and the simplicity of salt and pepper would be a real treat. 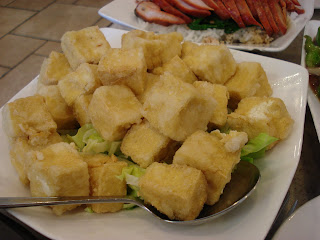 It wouldn’t be right to come to a place named Ming’s Bar B.Q. and not try some of their roast and barbequed wares. 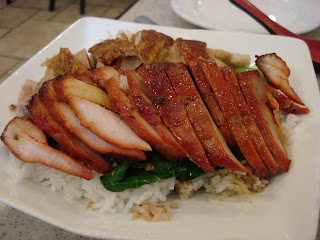 BBQ and Roast Pork over Rice satisfied that requirement, but I was amazed at just how dry and overcooked the bbq pork was. Served cold, it had a pretty good flavor, but it was overall a real disappointment. The roast pork was a different story as each piece still had some inherent juiciness from the fat. However, the real feature of the dish was the crispy pork skin of the roast pork, what a treat.

Jennifer and I never turn down the opportunity for a good bowl of wonton soup, so when I saw Hong Kong Style Noodle Soup on the menu, a bowl was quickly on its way. 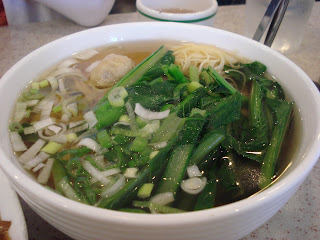 Well, the broth was a plain jane as could be. There were a metric ton of noodles but no good way to share them. 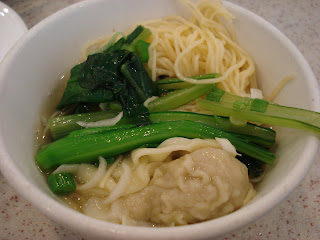 There were a few big, meaty wontons, but overall this was a pretty boring and cumbersome bowl of soup.

Maybe I ordered the wrong things at Ming’s. Food Near Snellville, Eat Buford Highway, and Blissful Glutton all seem to love Ming’s Bar B.Q., but for me I found it to be achingly mediocre Chinese food. I was hoping to find a new favorite place for char sui in Atlanta, but unless I’m completely wrong, it looks like I’ll have to find my Chinese bbq pork elsewhere.