KC’s Restaurant, long the only 4 star restaurant in the state of , served its last dinner on Saturday, May 8th, and I almost missed it. It was all a whim. Someone proposed going to Doe’s or KC’s on Saturday night and I was initially reluctant. Even though it’s only 120 or so miles to , the drive through the Delta is never an exciting one. However, mentioning KC’s made me start a few internet searches. Their website was down, there were only two old reviews on Urbanspoon, but I soon found their facebook page. “THE LAST DAY OPEN WILL BE SATURDAY, MAY 8TH, 2010” was the headline post on KC’s facebook page. With that little tidbit of information, there was no doubt in my mind where I would be enjoying dinner on Saturday night.

Once everyone arrived in , we all walked into KC’s, shown to our seats and greeted with a basket full of bread. 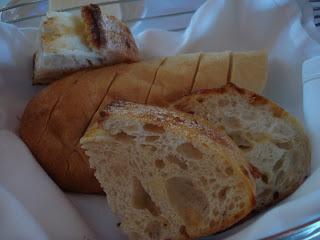 Looking through the menu, I knew what I wanted, the Chef’s Six Course Degustation. I have yet to go wrong with a degustation or tasting menu, but my plans quickly deflated when the waitress told me there was no Degustation menu tonight. Also KC’s requires a two day notice to prepare a Degustation. A bit perturbed, I was unphased as I decided to order my own version of the degustation menu.

The lobster crepe was the first appetizer on the table. 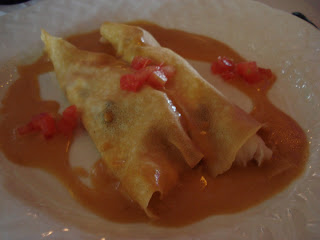 With goat cheese, mushrooms, roasted peppers, and shellfish cream, you would think the flavors of the lobster would be overshadowed, but each large, juicy chunk of lobster shone through brilliantly. The crepe was delightfully thin and the goat cheese and cream sauce added just enough tartness to contrast.

For some reason, I decided I should order everything on the menu that was in any way Asian, so the Crispy Gulf Oysters were next. 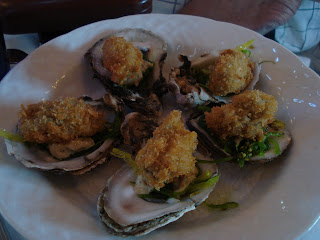 Panko fried and served with a Wakame seaweed salad and sesame-nori tartar, these oysters were by far my favorite appetizer. 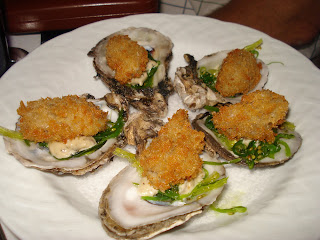 The oysters were crispy, but not at all greasy and their brininess combined perfectly with the sweetness of the seaweed salad. This appetizer alone was worth the drive to and makes me think I should now panko fry all of my oysters.

Lump Crab and Shrimp Cakes were the next seafood appetizer. 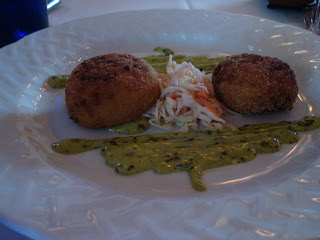 Moving away from the Asian ingredients, I ordered the Chef’s Hudson Valley Foie Gras Preparation. 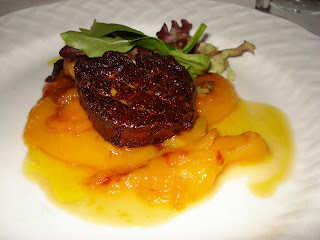 There was the rich creaminess of foie gras but it was buried under a mountain of char. The warm peaches were a nice touch, but this was an uninspired piece of foie. Quite frankly, the dish was ruined by a burnt center piece, but I would soon find that someone wasn’t tending the broiler as well they should that night.

With the sun going down outside, all my pictures would soon take on a distinct flashed appearance, but flash never hurts a plate of oysters on the half shell. 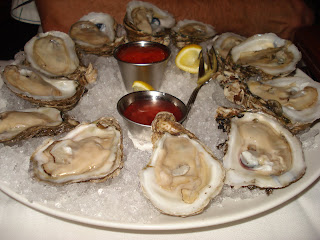 I first had Apalachicola oysters at Reef in , and they were just as good in . Meaty, small, and delightfully briny, I can only hope the oyster beds are spared the oil slick.

Rounding out the appetizers was a bowl of the Seafood and Andouille Sausage Gumbo. 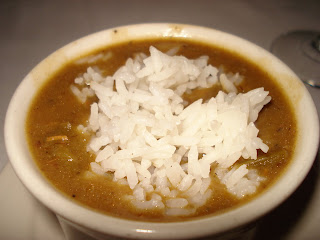 Thick, rich, and actually quite spicy, I was pleasantly surprised by this gumbo. There were big chunks of andouille and an excellent lingering heat, but not too many shrimp. It’s really a shame this is KC’s last night because this is a high quality cup of gumbo.

Now that the various appetizers were out of the way, it was time for the entrees to make an appearance on the table. 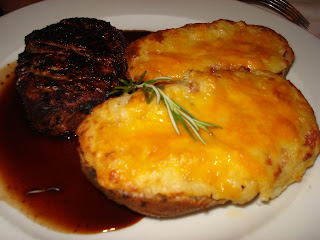 The filet with a red-wine soy reduction was the first entrée, and I was immediately a fan of the sauce. It really was a sweet, delicious reduction that completely overshadowed the charred exterior of the steak. Thankfully the steak was cooked properly towards the center, but there was simply too much char to enjoy the entire steak.

Not satisfied with the size of the 9 oz filet, Sam elected to enjoy the steak special, a 33-36 oz porterhouse with KC’s House “Steak Sauce”. 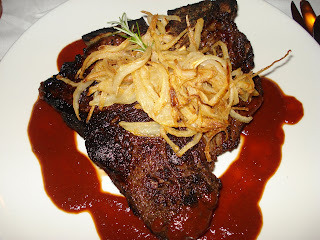 It certainly is a manly cut of beef, and Sam gave it a glowing review but I was unimpressed with the sauce. With flavors of tomato, vinegar, and brown sugar, it tasted like any other bottled steak sauce.

Rounding out my taste of all the Asian inspired dishes, my entrée was the Grimaud Farms Muscovy Duck. 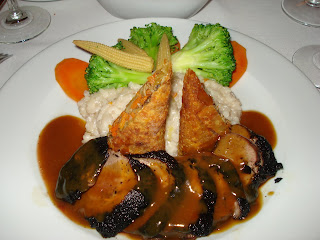 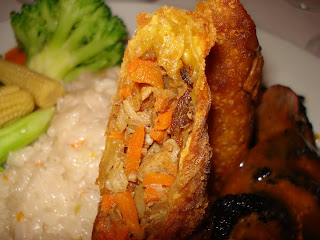 I went for the confit eggroll first and while I loved the duck confit filling, I’ve never liked these thick, doughy eggroll wrappers. This really reminded me of the ultimate Chinese buffet eggroll, but it’s still has the exterior texture of a buffet eggroll. 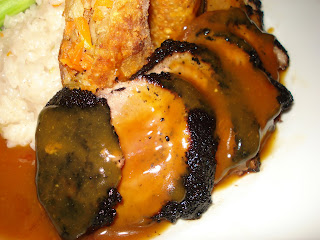 As far as the duck, you can’t help but notice that this was charred to death as well. The ends of the breast were dried out and subpar, but the very middle was that sweet spot of medium rare and delicious. I know that most Chinese duck sauces are sweet but this sauce was too sweet for my taste. Annoyingly that very essence of fatty, rich duck seemed to have been completely cooked out of the breast.

You think that would be enough but I was intrigued by the idea of a side of Parmesan Garlic Fries. 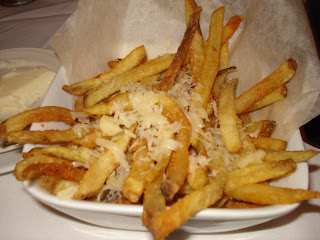 I should have just been curious about the fries as these were a real let down. Not well fried, and with no real garlic taste, I was disappointed in these fries.

Well, at the end of meal, I came away with a few mixed feeling about KC’s. There were some real moments of brilliance here, but there were plenty of contrasting moments of disappointment. I never want to see a restaurant close, particularly the only four star restaurant in the state, but a little investigation into the awards paints an interesting story. KC’s Restaurant won four consecutive four star awards from 2002 to 2005, but that’s a five year lull without any national awards. Sure, Delta and Mississippi Magazine have lauded them with awards for “Best Wait Staff” and “Best Appetizers”, and I’ll have to mostly agree with those sentiments. I felt the appetizers were the best part of the meal, and the wait staff was quite good, but I’m not prepared to say they were the best in the state. At the very least, I can see I did my best to sample a good variety of the plates at KC’s, I just mourn the fact I’ll never get to try them again.