It usually takes some convincing for me to head down to . I know its revitalization has been a part of the ideal for quite some time, but it’s still not a place I would hang out. That being said there are a few food related reasons to head to . First is Peaches, the soul food bastion, second is Big Apple Inn, home of Pig Ear sandwiches and pretty good hot tamales, the third reason is a new one to me, F. Jones Corner.

Actually F. Jones corner has been open for more than a year, but I figured it would quickly fade into the landscape. However in the past few months I’ve been hearing more and more about F. Jones being the late night location in . With that in mind, it took a coupon and lunch with a friend before I actually ventured to for lunch.

F. Jones Corner looks small from the outside and inside is no different. A dozen or so tables fill the floor space, but the center of attention is the stage at the end. Two of the three times I’ve been to F. Jones, there’s been an act on the stage, ranging from a 2 man combo to a single man on the fiddle and guitar.

Looking through the single page menu, it at first looks to be standard fried bar food, but looking a little deeper reveals a few surprises. First in the appetizer section is the Fried Gritz. 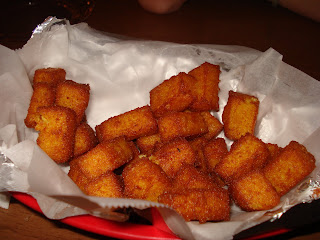 Yes, fried grits, it’s that southern favorite made even healthier by a quick dip in hot grease. Truth be told they are a little salty, but you quickly forget that as each bite confirms just how delicious and addictive these little blocks are. The only thing that bothered me about this dish was a dipping sauce. For some reason, I had the insatiable urge to dip these in some sort of sauce. It took a little trial and error but I eventually decided that bbq sauce or mustard worked the best.

The second appetizer that Kate and I shared was called Chili Pie. 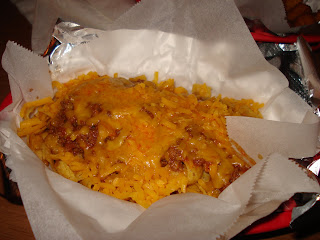 F. Jones Corner may call it Chili Pie, but this is that old Texas favorite, Frito Pie, in all of its cheesy, crunchy, and slightly spicy goodness. The chili is pretty plain jane, the cheese is simple shredded cheddar and the Fritos are straight from the bag, but it all works beautifully. 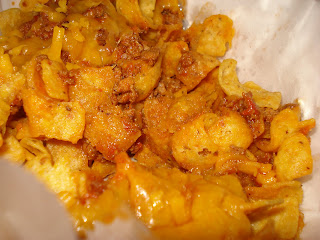 This is simple comfort food and it’s begging for a cold, winter night.

Seeing as I’m always on the hunt for a quality burger, I decided to try out the F’n Burger. 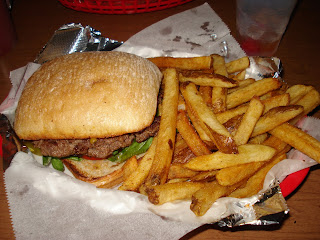 Served on a chiabatta bun and dressed with cheese and caramelized onions, the burger is a student of the smashed burger school of thought. 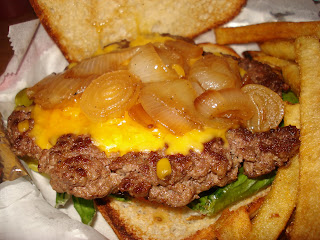 That smashed effect pays off as you can see the caramelized patches that form a crispy crust that you can only achieve on a griddle. One thing this burger is lacking is a little extra salt in the meat. However with the toasted bun, the caramelized onions, and that griddle sear, this is a quality burger that only needs a little tweaking.

Apparently once at F. Jones Corner wasn’t good enough. So a few days later, before his overseas departure, I convinced Sam to join me for lunch at F. Jones. At first he was just as skeptical about the location as I was, but I was surprised when he said he had been to a Late Night at F. Jones before and it was packed.

One thing Sam hadn’t tried was the food. After introducing him to the glory of fried gritz, Sam wanted to try their Fried Pickles. 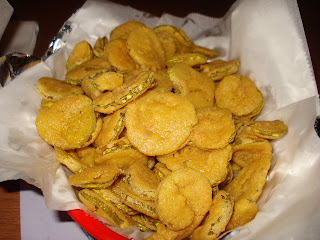 Fried pickles are something I rarely encounter, at least rarely outside of a chicken on a stick, but after these pickles, I might have to seek them out more often. The menu describes them perfectly “crispy, hot, and sour”. I wasn’t really sold on the ranch dressing accompaniment and there were more pickles than either one of us could handle, but these are still a solid appetizer for the pickle lover.

As far as entrees, Sam went for the F’n Burger, but his was a little different than mine from before. He went with a side of sweet potato fries in lieu of the regular. 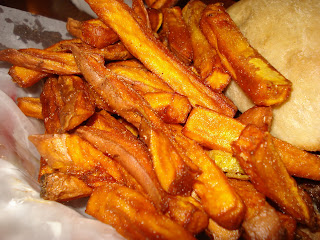 Sam said these were the best sweet potato fries he’s ever had. I found them perfectly cooked and quite tasty but with an odd feature. It wasn’t until the very end of each bite that I actually taste sweet potato.

Per a recommendation, I went for something different this time, the Pulled Pork Sandwich. 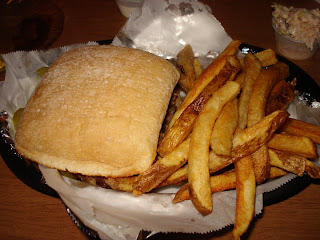 At first I was a little confused, the menu says they used Lumpkin’s Signature smoked pork but something looked odd. 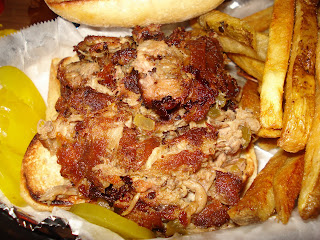 That looks like pork that’s been on a griddle. After asking the server, I was given the background. Apparently F. Jones has their own jalapeno rub they use on pork shoulders that are then smoked in Lumpkin’s open smoker. The meat is pulled and then reheated on the griddle, hence the grilled marked crust. 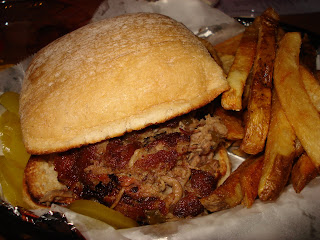 Dressed with some of the house bbq sauce, you get a great pork sandwich. You first get the crunchy toasted top of the bun, the juicy and slightly greasy pork, and a completely soaked bottom bun. Each bite is a real pork sandwich crescendo. Honestly, the peppery pork, the bun, the jalapeno rub, the sauce, all combine to make one of the best pulled pork sandwiches I’ve had.

Third time back at F. Jones Corner and I know exactly what I want. Since the first day, I’ve had my eye on the F’n Crab Burger. “A ½ pound crab cake seared to perfection with zesty aioli” sounds quite promising. 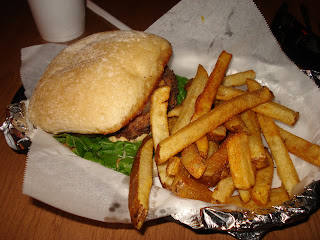 Well, at this point it looks just like all the other sandwiches. 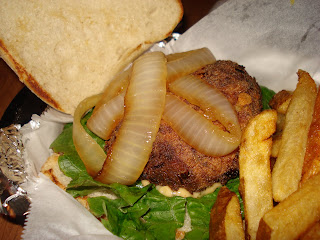 Underneath the bun, there is a huge crab cake complete with caramelized onions, lettuce, and aioli. Going for the first bite, I make a humorous discovery. The second you try to bite this sandwich; the crab cake flattens like a pancake. 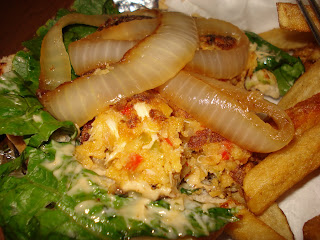 Even flattened, this is a well fried and spicy crab cake. A real nice feature is the aioli. It avoids the pitfalls of many remoulades, aiolis, and sauces in general by complimenting the crab cake not overpowering it. Yes there is a decent amount of filler in the crab cake, but you’d have to be daft to expect a full ½ lb of lump crabmeat for 10 dollars.

I had wanted to make this a seafood afternoon, but transportation was working against me. F. Jones Corner hadn’t received their shipment of catfish that day, so looking for something else I went with the Chicken Fingers. 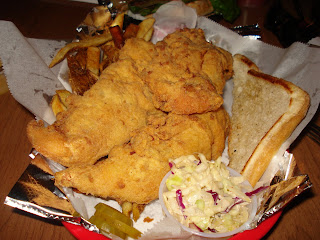 Well, what can I say? In a few short visits, F. Jones Corner has quickly gone from that random place on to one of my favorite downtown restaurants. The people are friendly, the music is good, and the food has been delicious. I may not make it to late night as often as I’d like but at least I know I’m only a short drive from fried grits.

Wow, I'm really glad you liked F. jones' food. I love that bar and I've had lunch there a few times. On Friday and Saturday nights there is a guy outside with a grill until four am serving up burgers and chili dogs, neither of which are great but really hit the spot when drinking late...When I first started going to f jones they were serving turkey legs at night, it was great.