Country hospitality, religion, and bbq, three huge pillars of the Southern way of life, and the three of those are alive and well at C'Paw’s. Why C'Paw’s? Well, because of a reader recommendation, I found myself in Pearl, Mississippi and standing in front of the Webster House. It’s a rather odd setting. Nestled behind a few warehouse business with chemical sounding names, there sits a converted farmhouse, complete with rocking chairs on the porch.

Inside I felt like I was stepping into an episode of the Walton’s. A pleasant little old lady greeted me at the door and showed me to my table. Shuffling across the creaky wooden floor, I couldn’t help but notice the sheer number of religious curious, knick knacks, and other piece of kitsch. For some reason I thought the Webster House is what Cracker Barrels would look like if they were run by the Southern Baptists.

Looking through the menu, there’s a pretty decent selection. There are plenty of fried appetizers to compliment the rug rat focused white paper table cloths and crayons, but also a variety of steaks, poboys, and sandwiches for the rest of us. Judging by the number of bible verses on the menu, it should be no surprise that there’s no mention of beer or liquor on the menu.

While I was tempted by the idea of a steak (I later found out it’s just average choice cuts with Montreal Steak seasoning on them), I was here for bbq. Since I was in Mississippi, I decided to shy away from beef or chicken and go for the southern standard of pork in the form of a C’Paw’s Triple. 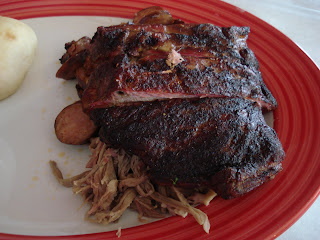 My platter came with an order of ribs, pulled pork, and sausage. I was most interested in the sausage if only for the fact the menu describes it as “special seasoned, smoked pork sausage”. I read that to say house made, but I could entirely wrong.

First off the platter was the ribs. 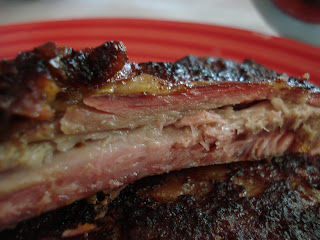 There is a nice definite hickory smoke ring to these ribs and the smoky flavor is there as well. However there’s not much after the smoke. There’s no evidence of a rub or any bark and there’s no real porky taste to the ribs. I did find it a little odd the membrane was left on the ribs, but I was more interested at how the ribs interacted with the sauce. They actually worked pretty well, but I still found the ribs to be greasy and dry, but that’s a virtue of being the end cut of the rack.

Moving on to the sausage, I was pleased with the hickory flavor and slight peppery finish to each bite. 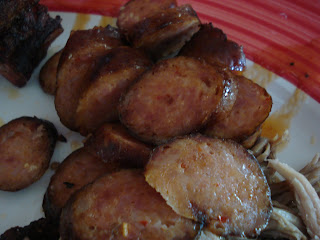 When combined with the house bbq sauce, I found the pork flavor to be completely muted instead of complimented by the sauce. 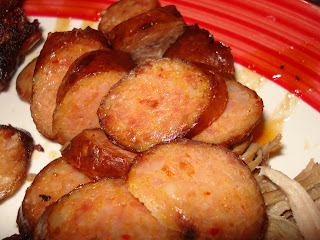 The sauce was too thin and watery to work with these sausage slices.

The last of the trio was the pulled pork. 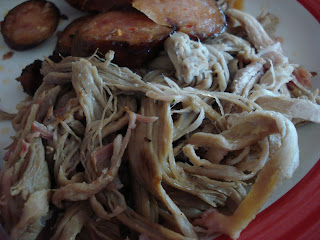 This was the last and the worst. Each piece was dry without any evidence of smoky or porky flavor. This was just a pile of some meat.

Of course three meats wouldn’t be enough for a meal. No, this platter was in dire need of sides, or at least the menu said that. 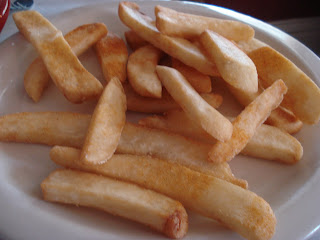 I know it’s convenience but I’m bored with places using frozen Ore Ida style fries. I’ll concede these were well fried and had a nice, light dusting of Cajun style seasoning, but they’re still a step above cafeteria food.

For a second side, I elected to go with the ubiquitous bbq accompaniment, baked beans. 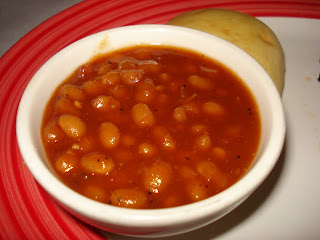 Surprisingly these beans were not overly sweat and there was a decent amount of meat mixed in the sauce. These baked beans were spectacular, but a solid order of the standard.

With such a varied menu not including daily specials, I feel there’s still a lot left to be explored on the C'Paw’s menu. However I was there to check out the bbq and I left thinking this was entirely average, even for Mississippi fare. While the sausage was pretty fair, the pulled pork was an affront to the good name of pork. Honestly it will be some time before I return to C'Paw’s. As decent as the bbq was, there was nothing there that made me want to return immediately, and I need a fair amount of impetus to get out to Pearl.