While looking for a recipe for my block of firm tofu, I came across a recipe in Dunlop’s “Revolutionary Chinese Cookbook” called Numbing and Hot Chicken. Thinking it was odd to see a recipe for something numbing in a Hunan cookbook, I took a closer look at the recipe. Dunlop reveals that the Hunanese love chili hot food, but find the tingling or “ma la” of Sichuanese cuisine “strange and unpalatable”. She was just as surprised as me to find that a numbing recipe would be one of the most popular Hunanese recipes.

Anyway, the recipe starts with….chicken. Dunlop writes the recipe is normally made with an entire baby chicken. 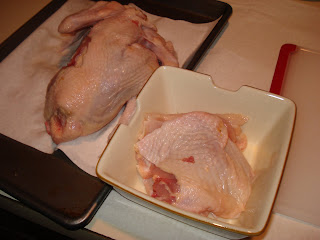 I was working with an entire chicken, but decided to stick with Dunlop’s suggestion of 12 ounces of breast and thigh meat. 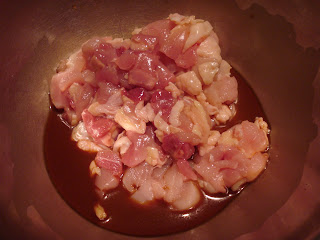 The skin on chicken was cut into bite sized cubes and then added to a marinade of 1 tbsp shaoxing wine, 1 tbsp light soy sauce, ¼ tsp dark soy sauce and 1 tbsp potato starch mixed with 1 tbsp of water.

With the chicken in the marinade, I got the rest of the prep work done in no time at all. 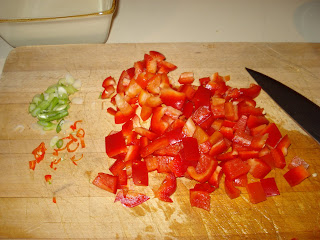 1 small red bell pepper is cut into the same sized pieces as the chicken, a red chili is sliced thinly, and 3 scallions (white parts only) are sliced at a steep angle. 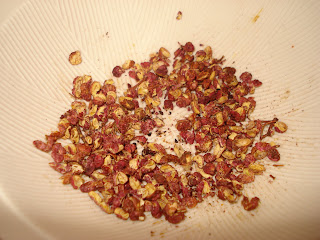 Rounding out the majority of the ingredients, 1 tsp of whole Sichuan peppercorn is crushed in a mortar and pestle.

In addition to the previously mentioned ingredients, a 1 tsp of sesame oil was measured out and a sauce was made of 1 tbsp light soy, 1 tbsp clear rice vinegar, ½ tsp potato starch and 3 tbsp everyday stock. 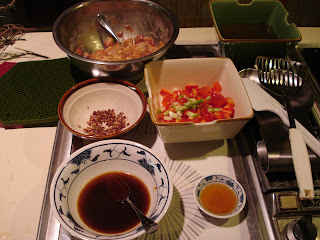 Now I was ready to start cooking my Numbing and Hot Chicken. 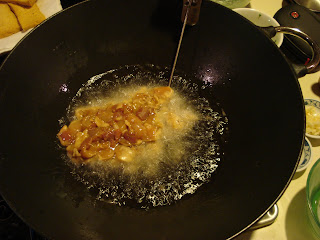 The chicken was then stir fried briefly until it separated. 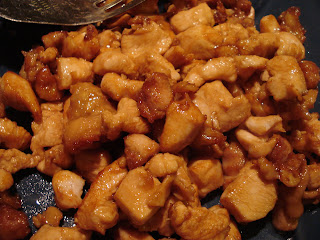 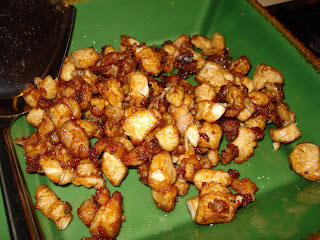 I’m sure this makes for extra crispy chicken but it does make a mess.

All but 3 tbsp of oil was poured from the wok and returned to high heat. 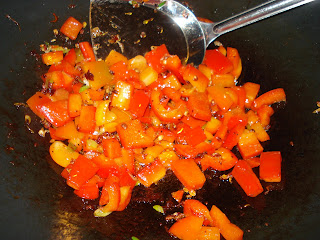 The bell pepper, chili, scallions and Sichuan peppercorns were stir fried until fragrant. 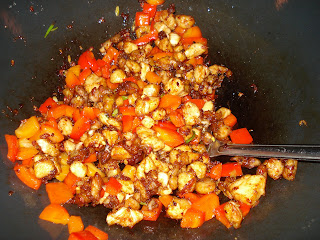 The chicken was added back to the wok and the sauce was soon after. 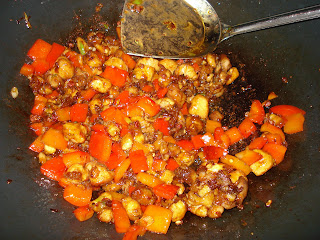 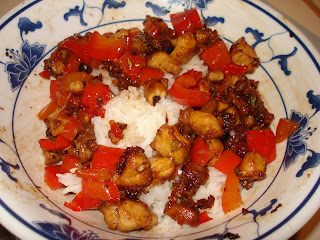 Served over rice, this seemed like a beginner dish as far as Sichuan peppercorns are concerned. There’s just the slightest hint of numbing on the lips and tongue, enough to make you say either “I want more of that” or “That’s enough”. Actually there’s only one thing that makes me hesitate to make this dish again. During the frying stage, all the chicken seems to form a shell on the bottom of the wok. I suppose it became a part of the dish in the end, but there was still some hardened chicken skin on the bottom of the wok. Regardless, it was a dinner well worth it.