Walking into CS’s, you immediately get the feeling there’s some age in this building. Maybe it’s the plethora of political and collegiate stickers on the wall, the earliest I saw dated back to the Nixon campaign in 72. Maybe it’s a nice collection of antique beer cans, or maybe it’s the smell. CS’s has a distinct mustiness to it; a mustiness that makes you wonder about the cleanliness. However cleanliness is not always next to godliness. I’ve had many a fantastic meal at a dive that smelled like a mop bucket from WWII, so maybe CS’s has some of that dive bar charm in its food.

Visit number one, it’s a Tuesday afternoon and I have high hopes. I’ve heard rave reviews about the burgers at CS’s. My coworkers can wax nostalgic for hours about the fantastic burgers they’ve eaten at CS’s over the years. One coworker talks about the Joe B. Burger, and with bacon, jalapenos and cheese, it sounds promising.

After ordering, it seems like seconds before my plate hits the table. 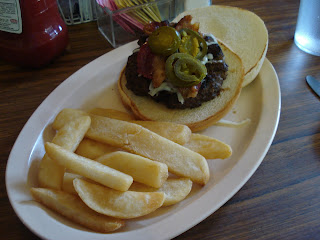 Oh dear, that doesn’t look at all inspiring. 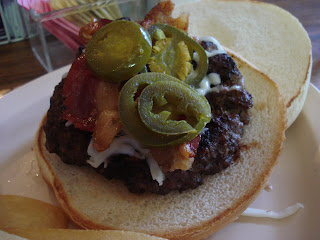 Thinking I would be eating a behemoth, I ordered a regular instead of a large. I at first thought I had received a small, but this is the regular burger, and what a miserable looking specimen. 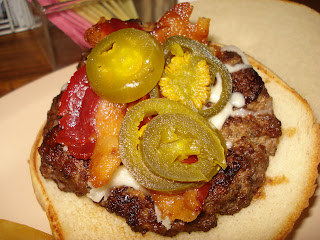 A massive bun dwarfs the patty, shrinking its already miniature statue. Delving in, I’m reward with a big helping of banality. Overcooked, dry meat, plain lackluster bacon, even the jalapenos are as boring and canned as they can be.

Maybe the fries are the ticket? 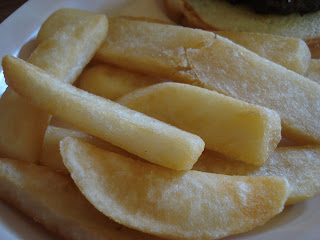 I’m afraid I don’t have a train analogy for these frozen starch sticks. It’s simple sysco potato product, nothing to see here.

Those potatoes signaled the end of my first visit. Hoping to find a diamond in the rough, I went back for a second visit a few days later.

Having arrived a little earlier in the afternoon, I was surprised to see a packed restaurant. Is there something special about this run down looking building? Hoping to rectify my previous burger catastrophe, I went straight for the jugular, a large Inez Burger and a Chris’ Delight.

My personable but curious waitress told me that the Chris’ Delight was their take on a Philly Cheese Steak with gravy. Preconceived notions of cheese steaks immediately flooded my mind. 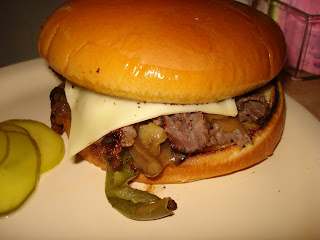 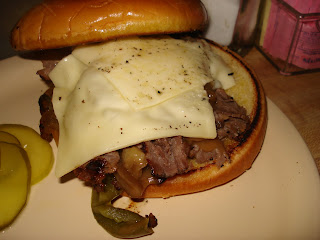 Despite seeing meat on the bun, there was no beefy taste to this sandwich. Sure the caramelized onions were allright, but this was just a greasy bun with some peppers and onions and some cheese thrown on for poor measure. I’m not sure who Chris is, but if this is his delight, he must be a broken shell of a man.

Cheer up, this isn’t going to be all doom and gloom. The Inez Burger has arrived. 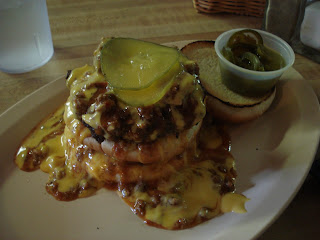 Good Lord, it’s actually a double-decker, complete with a bun in the middle. 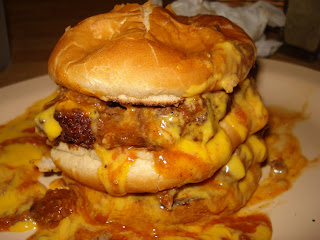 Here is the beast assembled. Now is the time to admit, I’ve been trying to think of a way to aptly describe this burger, and I think I’ve arrived at a conclusion. Allow me to paint you a picture. You’re in college, it’s 2 am on a Friday morning and you’ve just downed the better half of a case of Natty Light. You stumble into the 7/11 looking for any form of sustenance, something good and greasy. You spy a frozen burger in a bag, you grab two and nuke them in the microwave. Spying the nacho station, you add liberal ladles of the chili, processed cheese, and jalapenos to your newly constructed double-decker burger. You know it’s disgusting, you know the food you’re about to eat has more in common with a plastic hard hat than something that came from a cow, but you don’t care. You take a bite and it’s your own taste of Nirvana. It’s drunk food at its finest.

Of course there is a caveat to that story. I was eating the Inez Burger at 1 pm on a work day, and it’s hard to convince yourself this is good food when your BAC is too low to register.

Back for visit # 3 and this time, I dragged Sam with me, mainly to see what he thinks of the Inez Burger. However, before we can indulge in burgers or blue plate specials, it’s time for a lovely appetizer. 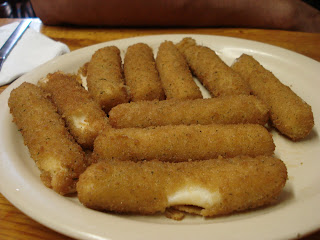 Ah, this brings back memories of the high school cafeteria. With each bite of these cheese sticks, I’m reminded of just how nauseating they are. 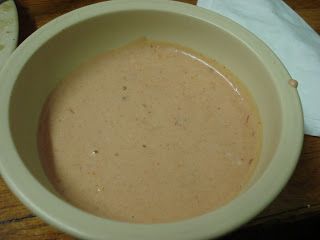 As if the salty disgustingness wasn’t enough for us, they were served with a side of comeback dressing. The cheese sticks are too salty, poorly fried, and now dunked in glorified mayonnaise & Thousand Island dressing. This just goes to show that some things are best left on the Sysco truck and in memories.

Sam got his own taste of the Inez Burger and what were his thoughts? 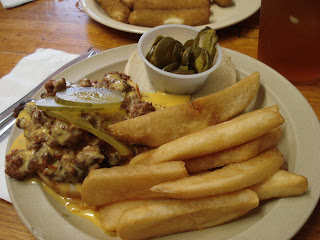 Let’s just say they weren’t kind, and Sam had no idea why I would even remotely like this burger. When I countered with the drunk food argument, he reminded me we were far from drunk and this was far from a good burger.

While Sam was forming his own opinion of the Inez Burger, I wanted to get a taste for some of the daily specials at CS’s, so I went with the chicken and dumplings. 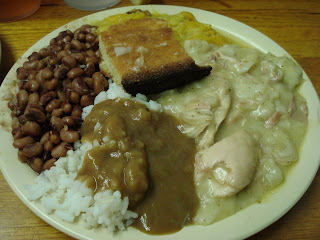 I’d like to begin by saying that little inconspicuous piece of cornbread was one of the worst examples of cornbread I’ve ever eaten. If you want dry as a brick and flavorless as Styrofoam peanuts, this is right up your alley. Honestly the rest of the plate was more of the same. The rice and gravy was disgusting bag rice with packaged gravy, the black eyed peas were overcooked and bland as could be, and what I think was zucchini was cooked to a lifeless bland pulp. If there was a highpoint for this plate it would be the chicken and dumplings. They actually weren’t too bad. The dumplings weren’t just canned biscuit dough and the chicken, while a little dry, was pretty decent. On the downside, you didn’t get a very large helping of the southern favorite.

So, three visits later, what have we learned? Well, since there aren’t any 7/11s for 400 miles, CS’s is your best option for a chemically synthesized, extruded, and processed burger. However, if you’re looking for a juicy patty that fills the bun and satisfies your need for a real hamburger, you’re better off looking somewhere else. The same goes for the blue plate special. I haven’t been to a Piccadilly in dog’s years, but I’d wager their meat and three is better than CS’s. In short, I really can’t see any reason to go to CS’s at all. I suppose I’ll treat it like I always did, just a part of the decaying scenery on West Street.

Thank the Lord someone has some decent tastebuds. The folks I work with say the same things about CS's, but I walk away every time just like you did - scratching my head wondering if I was missing something. It's just not good. Period.

-I'm happy to be your kindred spirit.

This is Stamp's propaganda. How dare you. I ate CS's today and it was EPIC.

-I'd hardly call this Stamp's propaganda. I've never been to Stamp's, and I don't really even like Cool Al's.

What did you expect from CS's? Gourmet food? It's a greasy spoon type place that holds a special place in a lot of people's hearts. You come in and bag on everything. Sometimes you need to take places for what they are. Being such a well respectedfood blogger with all your fans you would think you would know walking in what you were going to get. Does it have to be farm fresh to be acceptable? I think you should maybe give CS's another shot and I'll tell Ms. Inez to make it extra greasy for you. I ate dinner there on Thursday, and knowing that it is what it is, it served its absolute purpose and I left full and satisfied. On a side note, I don't get why anyone with a computer and the ability to eat is a critic. What have you done in the restaurant world that makes you an expert on anything? Because you eat, a lot, you're an expert? Also, when it comes to cleanliness, CS's has an A on the wall from our beloved health department.

I love CS's! Their fried chicken on Wednesdays is super! Pork Chop Friday is here! OK I might have a coronary but hey you only love once. Gourmet it is not however many great business deals and contacts have been made there.

Maybe next time just get a beer. Hang out with your friends and listen to Inez. Instead of watching our sitting decay support those who are trying to keep it going!

CS's is great. Never had a bad meal there. Great ambience, too. I sense a smear job by this hack.....

Glad to see that nearly six years later people still get miffed at this.

They should be you white flight piece of shit

Hope you enjoy it.