I-20 to I-85, unloading the car, dinner discussions, meeting with Aaron, and a ride down Buford Highway were the precursors to me, my sister, and Aaron sitting at the sole occupied table in Bo Bo Garden on Monday night. With most of the kitchen and wait staff having their family dinner in the corner, it was safe to assume that 9 pm on a Monday night is not the busiest time for Bo Bo Garden. That’s not important, I’m more interested in what sort of food Bo Bo Garden has to offer.

Struck by the curious name, the first thing we ordered was the Chinese Fried Bread Stick. 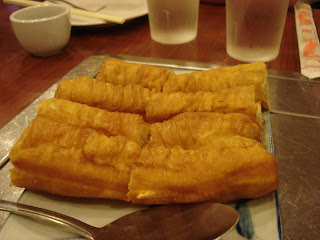 Maybe I was expecting a bowl of special dipping sauce to accompany this dish, but there was nothing of the sort. 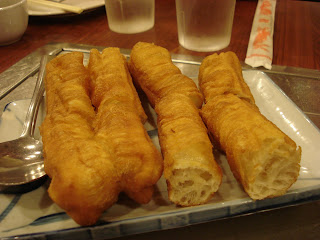 We decided this was a churro without any cinnamon or sugar, bland as could be, but we couldn’t stop picking at it.

Despite being in the Appetizer section, the Three Kinds Dumpling was a soup. 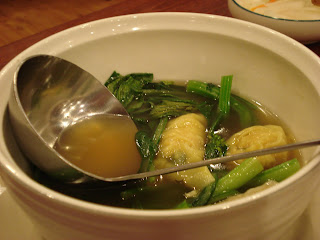 For all intensive purposes, this was the same 3 dumpling soup from Wan Lei. 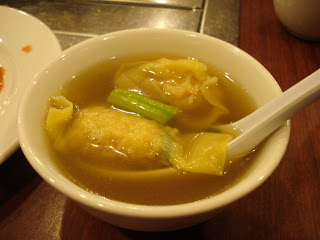 Even so, this was an immensely satisfying soup, although I’m not sure why the waiter left all the gai lan in the serving bowl.

As odd as it sounds, I’ve been looking for duck tongues on Chinese menus for the better part of a year, specifically the type served at dim sum. I thought I would succeed at Fung’s in Houston, but I was there too early. All that changed as Bo Bo Garden has two duck tongue dishes on their menu, Duck Tongue with Chef’s Special Soy Sauce and Pepper Salt Duck Tongue. 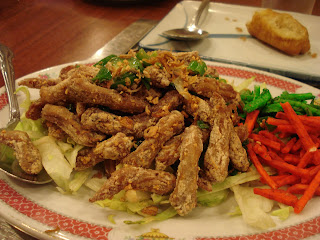 With a chili for spiciness next to them on the menu, I opted for the Pepper Salt Duck Tongue. 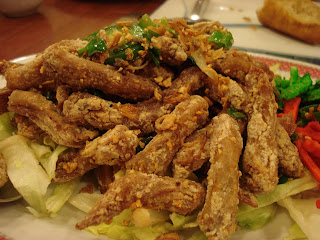 I suppose I had something like beef tongue in mind when I tried this, but even without the meatiness, duck tongues are a fast favorite for me. The meat is fatty and extremely ducky. Specifically, the fried salt and pepper crust was a great contrast to the fattiness inside. The only real disappointing feature was the lack of spiciness.

It was an odd sense of déjà vu, but when was asked the waitress for a recommendation, her answer was the Seafood Pan Fried Noodle. 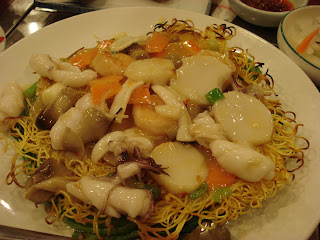 The same scenario unfolded nearly a year earlier at Wan Lei, apparently the restaurants are that similar. I think my comments from the Seafood Noodles at Wan Lei echo my experience at Bo Bo Garden: “Despite excellently cooked squid and oysters, this seemed to be a very touristy recommendation by the owner. Everything was swimming in a thick, white, starch sauce. This is something I expected off a buffet, and was a complete nosedive from our first three dishes.”

Next on our table was the String Beans & Shredded Pork Sauteed w. Belacan Sauce. 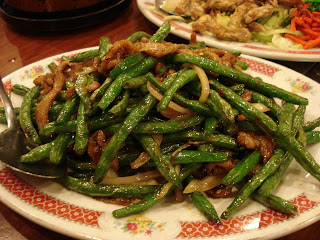 Even though it’s a tempting name for a dish, the real reason we ordered this was to find out what Belacan Sauce tasted like. Well, I soon found it was a sort of shrimp paste, and while potent, it made for a very tasty dish. The dish was a little greasy and the green beans look shriveled, but it all worked quite well. A little spiciness didn’t hurt either.

Last to the table was a dish from the Casserole Rice section of the menu. 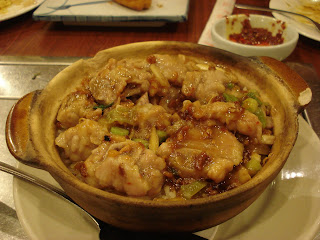 Spare Ribs & Taro with XO Sauce, even though it took a good 20 minutes to make, was well worth the wait. The spare ribs were tender and rich, and while I found the taro to be an odd addition, it worked quite well with the rest of the dish. The only real problem was timing. By the time this arrived at the table, no one had any room.

I try to keep an open mind to any culture’s cuisine, but one thing I just can’t understand is the fascination with red bean. 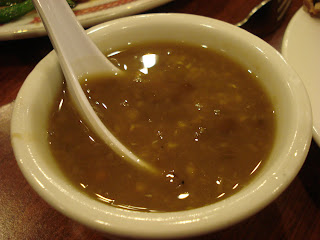 Yes, it was a complimentary dessert, but it’s not at all good. Each bite of this soup tastes like dust to me. However, I’ll keep trying red bean dishes, maybe there’s some euphoric dish out there. Maybe I’ll someday long for red bean desserts. It’s not likely, but why not keep trying?

At the end, all three of us were a bit puzzled by the experience. Most of the food was quite good, but it was all a bit lacking. I do think I had a better experience at Wan Lei, but Bo Bo Garden is a healthy alternative. At the very least, I’ll remember to stop asking for suggestions in Chinese restaurants; it invariably ends with noodles and gloopy sauce.

hello! stumbled across your blog when googling whether bobo garden serves dim sum.

the fried bread stick is actually something that you normally order with rice porridge (to dip) - it's a breakfast item, weird that they offered it at night!

and i love bean desserts, especially the texture. maybe it's something you have to grow up with?