It’s been a little while since I was last in Atlanta, but after navigating through a few Cuban Sandwiches, I-20, and traffic on I-85, I was back in Buckhead. Of course, being back in , thoughts immediately fall to dinner. However, there was a happy hour to attend first. Drinks and hors d’oeuvres gave my sister and I plenty of time of time to argue about a location, but eventually we agreed on Tuk Tuk.

Closely related to Tamarind Seed and , Tuk Tuk focuses on food. I’m always open to the idea of Thai food and with a decent sized group, there should be plenty of dishes sampled.

When I actually get a chance to look at a menu, I’m a little surprised at the divisions and prices. Street food conjures the images of bargain priced meals, but I suppose this is Buckhead real estate, not . As for the divisions, I’m confused by the section of “big plates”. For street food, the dishes in this section all seem a little cumbersome.


That’s enough pedantic menu scrutiny, it’s time to scrutinize the food. The Roti Ke-Yow Whan was the first dish on the table. 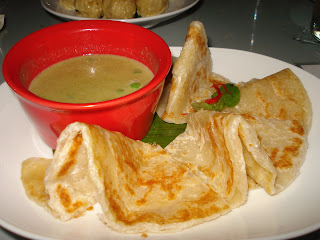 Labeled a crispy roti with spicy green curry dipping sauce, this was interesting start. By itself the roti was incredibly bland, but it was good vehicle for the very flavorful curry sauce. The only major complaint for this dish was there wasn’t enough roti for the curry sauce, especially for five people.

An order of steamed chicken and shrimp dumplings was next on the table. 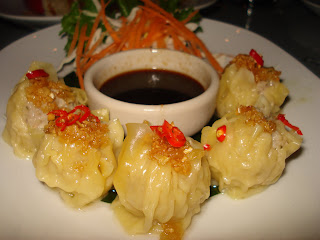 Kanom Jeeb came with a doughy, very wet (even for being steamed) wrapper. There was a very thick filling inside, but these dumplings didn’t stand out too much and were quickly forgotten amidst the other dishes.

When it came to the Mieng Kum, I have to agree with Chow Down Atlanta. 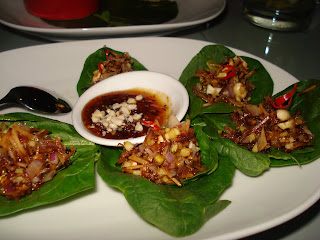 Arriving premade takes a lot of fun out of this dish. Another fun aspect that was missing from this dish was the kick. The spinach leaves were thick and able to hold the filling, the palm sugar made for a sweet filling, but where were the chili peppers? I was also missing the added flavor of dried shrimp, but without a little bite this dish was just pretty good, not outstanding.

On the whole, our dinner group of five was willing to try most anything, but Megan was having none of the Thap Kai. 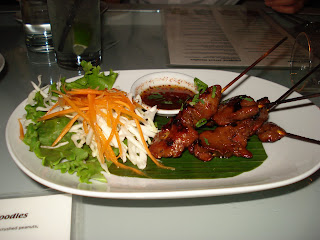 Grilled chicken livers marinated with garlic, cilantro, and pepper, it sounds like a winning combination right? 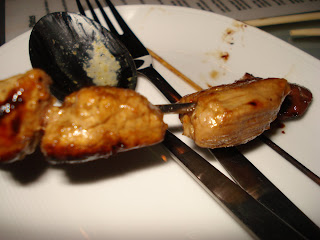 These chicken livers had potential. Each skewer had a nice glaze, no real dominant cilantro flavors, this was a real winner. Unfortunately, every piece of liver was overcooked. Crumbly, irony, generally unappealing, there’s not much to hide behind with overcooked liver. If there was a low point of the meal, this was it.

The Neau Sawan is labeled as a Northeastern Thai beef jerky; I haven’t seen anything jerky like on a Thai menu since I went to Lotus of Siam in . 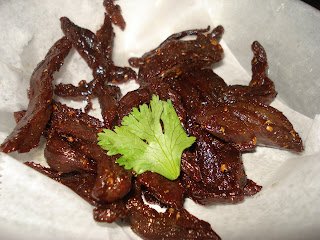 Each piece had a good, beefy flavor, but I wasn’t really seeing the jerky in this dish. There was a little sweetness and saltiness to each bite, but it simply seemed to moist to be labeled as jerky.

One dish certainly stood out in the visual department and that was the Neauh Ping. 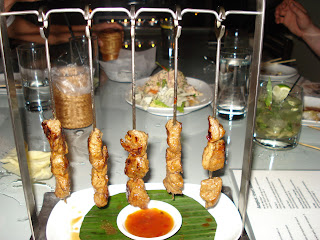 Yes, you have a 50% chance of ending yourself with the metal skewers, but that’s worth a good beef kabob right? Well the beef here is well marinated and cut into large chunks but it’s only sort of tender. Oddly the tamarind sauce completely covered any beef flavor. At least it was a tasty sauce.

I’m not exactly sure how Larb Kai (chicken) falls under the salad category, but that’s where it is at Tuk Tuk. 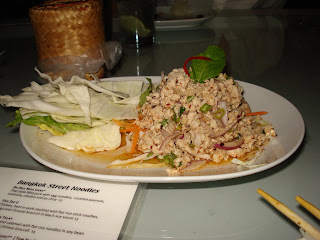 The chicken might be a little on the dry side, but this is a quality order of larb. There’s a nice spice to the dish, and it goes well over rice. I can’t ask for much more in a larb.

When the Kra Pow Moo was brought to the table, there was some immediate discussion about how best to eat this dish. 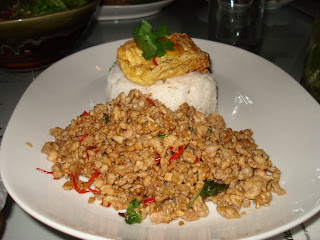 By itself the pork is quite good, but what do you do with rice and egg? Someone at the table quickly noticed that the pork, rice and egg together is a dynamite combination. I think Melanie described it best as “like Thai Breakfast”. This really was one of my favorite dishes from the evening.

Rounding out the meal was an order of the Kao Pad Goong Chiang. 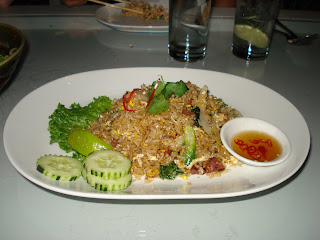 Essentially fried rice with Thai sausage, eggs, onions, and Chinese broccoli. I spent a good while searching for any sign of the broccoli; there was none to be found. Nevertheless, this was a peppery order of rice, and quite delightful. I found the Thai sausage to be a lot like the more familiar lap cheung. Even better, I eventually found some Chinese Broccoli, it was just diced quite finely.

Wait, I almost forgot. We had one more dish, and it was a pain in the ass to share. 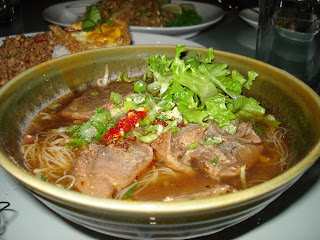 The Keiw Tiew Neuah immediately struck me as a Thai take on pho. The broth might not be as sweet or spicy, but it was still delicious. The thick slices of beef were tender, fall apart in your mouth tender. The noodles were thin, delicious, and guaranteed to dirty your shirt. I really could enjoy a bowl of this on my own, but again, it’s quite cumbersome to share.

All in all, I found this to be an incredibly enjoyable experience. The wait staff was attentive and helpful. The décor didn’t exactly remind me of food, but the two projectors that were constantly showing images of Thai markets and dishes helped remind me of the restaurant’s intent. In fact the only real downside to the meal was the Thap Kai and it’s dried out, overcooked chicken livers. If you remove that from the equation, it was a very successful meal, and a pleasant departure from the Thai restaurant norm in .

i had a disasterous evening at the restaurant. Actually, the food was quite tasty and my companion and I were having a nice time. At the end of the meal, in which we accumulated up a decent tab for a restaurant of this price point ($160), I left a customary 15% tip.

My companion and I walked out of the restaurant and down the elevator and to my car in the parking lot in the back of the building, where we were accosted by our waitress "Zi" who complained about the tip and asked for more money. Mortified and angered, I gave her an additional $20 dollars on top of the 15% tip. I responded in shock quite frankly and should not have given her anything.

This type of behavior is unacceptable. I have a call in to management.

-Wow, that does sound like a disastrous evening. I hope something worthwhile came from calling the management.

if you like tuk tuk; you should try little thai cuisine @ 220 sandy springs circle :) it's very authentic & the restaurant is casual elegant