I’ve always had mixed feeling about Pan-Asia. One on hand, I can appreciate the idea of combining the highlights of the Asian continent to make one awesome menu, but some many delicious things are left out in the process. There are more than two billion people in Asia and dozens of countries, so why are only four countries represented in this menu? Anyway, I’ll save the bitching about Pan-Asia’s purpose for later, I’ll at least tell you if their food does the people of India, Thailand, China, and Japan proud.

To me, it seems fitting to start an Asian meal with some sort of duck, thus the duck pot stickers are quite a welcome site. 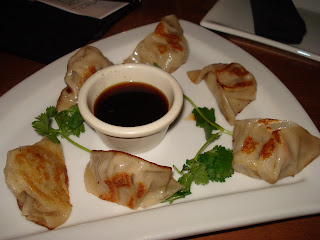 Well, there’s a semi thick skin containing a rather muted duck filling. Accompanying these pot stickers is an overly sweet dipping sauce; each dip dulling the already muted duck flavor. Maybe it would help if they had a fattier piece of duck for these dumplings, but right now, it’s a poor use of jewish bacon.

One thing I look for on a menu is an item that’s labeled a “specialty”. Surely, if a restaurant labels something a “specialty”, it will be pretty good, right? Well, the spicy crab cakes actually fulfilled that notion. 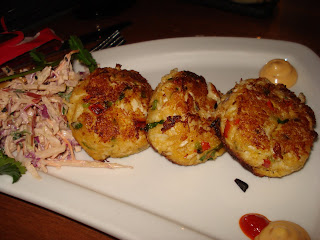 Served with a Fuji apple slaw, these crab cakes have everything you look for in a quality crab cake. There’s a nice, solid sear, lots of crab and no excessive amounts of filler, and there’s a flavor that compliments, not overpowers the crab. These crab cakes actually do live up to their spicy name as a little lingering heat is there after each bite. 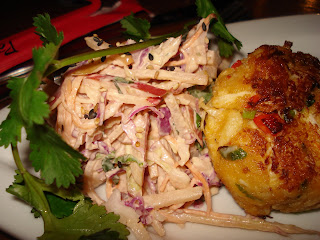 I didn’t see any real point to the Fuji apple slaw. There is the crisp crunch of apples in each bite, but this just tastes like a fruit salad. As far as I can tell, this apple salad doesn’t augment the crab cakes in any way, but at least it’s tasty on its own.

Moving on to the entrée, I wanted to see how Pan-Asia would handle the classic dish, Pad Thai. 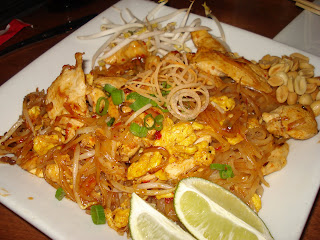 Going with the chicken version, this dish had a very nice presentation, although mixing in the bean sprouts and peanuts quickly became a messy situation. After that, all I really got from this dish was tamarind, nothing but tamarind. 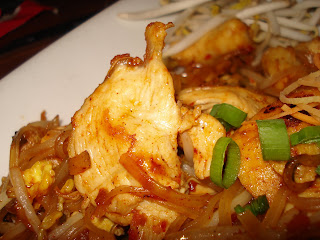 Sure there was plenty of chicken for the tamarind sauce, but it was all dry and overcooked. Where was the tofu, the dried shrimp, more than a few scraps of egg? Looking to tailor the flavor, I asked the fish sauce and sriracha, which helped a little, but it was still like biting into a brick of tamarind.

At the end of lunch, I thought that Pan-Asia isn’t that bad, it just needs work. It’s a very cursory glance at Asia and as such, there’s no real depth to the menu. Where there was depth was the wait staff. Sure, it was 1 in the afternoon on a Tuesday, but my waiter was more than attentive and very eager to make my meal a pleasant experience.

It was on the way out that I saw the award from Mississippi Magazine as reader’s choice for “Best Asian”. I love that award, I just wish we had a best European award to compliment it. If we can compact nearly 30% of the world’s landmass into a tidy category, why can’t we do the same to a paltry 7%?


Generalizing grievances aside, for such an expansive menu, I thought that Pan-Asia deserved a second look. So a week or so later, I popped in for another meal, and immediately went for another Thai favorite. Tom Kha Gai is a wonderful dish, filled with the flavors of galangal, lemongrass, kaffir lime leaves, and rich coconout milk, unfortunately Pan-Asia doesn’t know that. 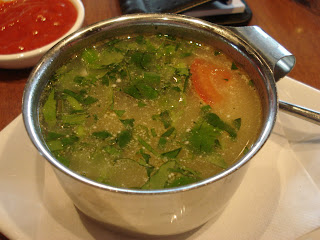 Here we have a bowl of thin chicken broth with some shredded cilantro on top. 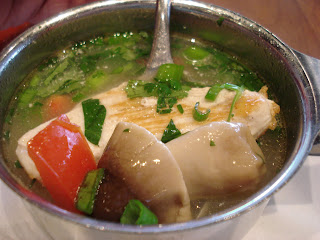 Inside this bowl were two large mushrooms, two pieces of overcooked, rubbery chicken, and what looks like a carrot. I didn’t waste my time with this and neither should you.

The second appetizer was a little bit my fault. When I saw Vietnamese spring roll, I thought of the cold rice paper rolls. If I had read the menu more closely, I would have seen that Pan-Asia labels egg roll as spring rolls. 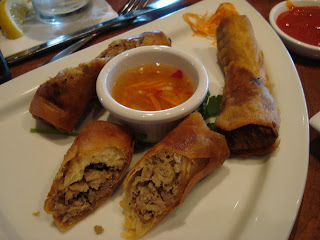 I certainly can’t fault them for a lack of pork, and I’m surprised to see there was simply too much pork in this spring roll. 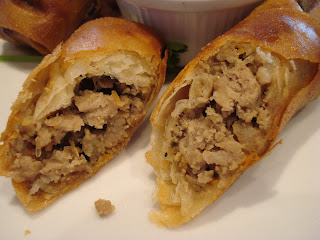 True there are a few scattered shreds of shitake mushroom, but I had a hard time finding any carrots or cellophane noodles in here. Instead, we get a completely Americanized roll, all pork, bare minimum of veggies, and absolutely no balance of flavor.

For an entrée, I thought something from their signature entrée section would be fitting. Being a glutton for punishment, I again choose duck, this time in the form of Roasted Duck Breast. 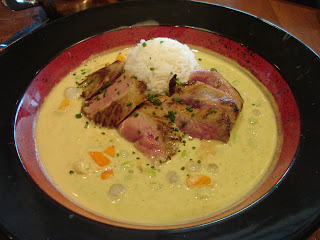 Apparently all the coconut milk from the Tom Kha Gai ended up in here, along with a lot of green and yellow curry paste. 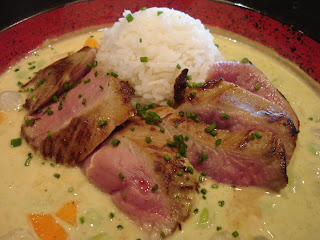 The duck is apparently roasted separately, sliced and then dropped in a big bowl of curry sauce, a bit of a lazy dish. The duck is actually quite bland and under seasoned. There’s no good sear, and no real flavor. You would think duck would stand out and actually stand up to the curry, but it’s just completely washed away in a sea of pungent, tasty curry paste. 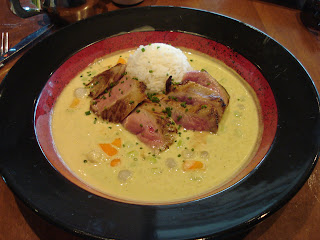 Another part of the dish that confuses me is the edamame that’s sprinkled throughout the dish. Being edamame, it doesn’t carry a whole lot of flavor, definitely not enough to stand up to curry. So it doesn’t add anything to the dish flavor wise, but it is a nice textural diversion.

I’d like to say my waiter was just as rapt as the last time, but by the third or fourth time he dragged his sleeve in my food, I had had enough. There is a lot more to the Pan-Asia menu, no doubt there is a gem or two hidden in one of the categories, but I’m no longer that interested. I’d much rather go to a place that focuses on a particular ethnic cuisine than one that tries to do everything and ends up doing it all not particularly well.

Dre, to be fair, there aren't a ton of more regionally specific "Asian" places to eat in Jackson. I mean, I never even knew we had an Indian restaurant until I saw it on your site. I think Pan-Asian does a nice job for the kind of clientelle they usually serve (which, obviously, isn't as knowledgeable as you are about the details of varying Asian flavors). That said, I have done a lot of interesting reading lately about why the Pan-Asia concept is often so hard to execute.

True there aren't a whole lot of regionally or nationally specific Asian places in Jackson, but there are more than you think. C'mon, there's been at least one Indian place in Jackson for years, and there were two for a good while, then one and now we're back at two again.

I'm going to have to disagree about Pan Asia doing a nice job. Even looking past the fact they barely skimmed the surface of any of the cuisines they represent, the food isn't cooked well at all.
That being said, most quick reviews I've read say it's a great place for drinks, that I can understand, but I'll go somewhere else for dinner.

Ugh! I'm so glad someone else agrees with me! It's not just what you ate. I've given PanAsia several tries, and have always left with the same feeling you had. Also, I felt the same way about the Tom Kha soup. It is ridiculous that they even call it that. I've made it, and several of the other entrees they serve, and it doesn't make since as to why they can't do them well. They aren't doing hard dishes!