Once I knew I would be passing through Natchez again, I started searching for new places to eat. A thread on Chowhound mentioned a new chef at the Carriage House, but I decided to save that for some other time. After a little more searching I came across the website for the Magnolia Grill.

Apparently Magnolia Grill was the popular spot that Saturday afternoon. I was lucky to get a table as people were soon waiting in line. While enjoying my seat and the view across the Mississippi river, I started to narrow down my choices on the menu. Their website said they were famous for their “samburger”, an 8 oz beef patty with secret seasonings, but I wasn’t really looking for a burger. I decided to start with an intriguing special appetizer, the bayou egg rolls. 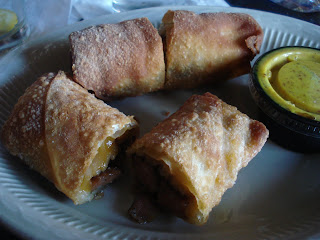 Described as eggrolls filled with a jambalaya of smoked chicken, tasso, and smoked sausage, this dish had real potential. 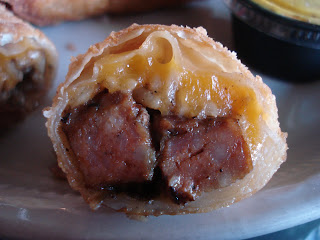 There certainly was plenty of meat in each eggroll, and a fair amount of grease. Each time I took a bite, there was a puddle of grease on the plate. 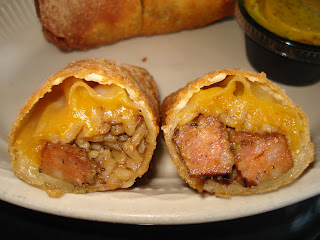 Like I said this dish had potential, but the cheese essentially ruined it. I could live with the thick, Chinese buffet style eggroll wrappers, but why so much cheese? Another odd part of the dish was the creole honey mustard. Each time I tried to use the sauce, it overpowered everything in the eggroll. I really think this dish would have worked better if they had left the cheese and the honey mustard behind.

Undecided about an entrée, I asked the waiter which was better, the Catfish Briar or the Samburger. He recommended I save the Samburger for my next visit. 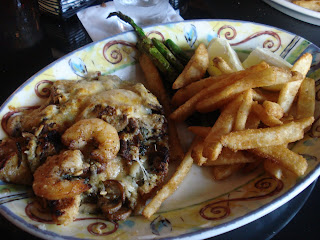 At first it looked great. The Catfish Briars is a baked catfish with shrimp, green onion, mushrooms, bread crumbs and parmesan. 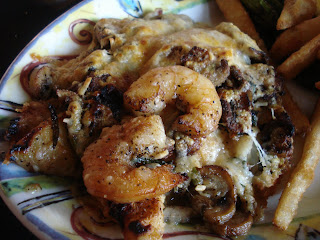 The first bite was quite good. The fish was juicy and well seasoned, but a little salty from the cheese. However with each subsequent bite, I noticed the cheese began to overpower everything. 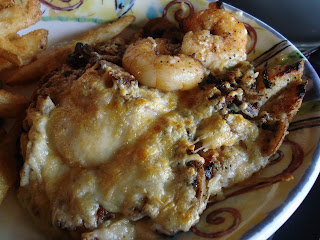 I’m not really sure why they paired fish and cheese together. This would have been a nice dish without the dominating cheese. The shrimp were on the opposite end of the spectrum. A little overcooked, I found the shrimp to be flavorful at first but the flavor quickly disappeared and I was left with bland, overcooked shrimp. 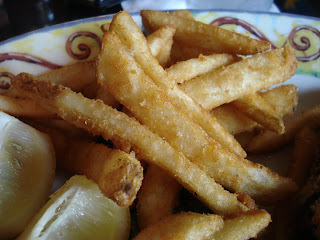 The entrée came with a choice of two sides and battered fries were my first choice. The battering really came through as each fry had a crunchy exterior and a creamy middle. Not too shabby, but the same effect could be attained with proper double frying. 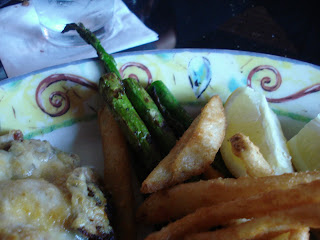 The asparagus, despite their looks, were the most consistent thing on the plate. Each spear possessed a smoky, grilled flavor, a simple, subtle seasoning, all forming a pretty solid side dish.

Walking away from Magnolia Grill, it seemed like it had been a mixed bag. For every plus to a dish, it paled in comparison to the downsides. It’s not often that cheese plays such a negative role in a meal. Still, there don’t seem to be too many other options in Natchez and at the very least, I’ll be back to Magnolia Grill to see what the Samburger is like.