Once again I’m late to the party. Both Carpe Jackson and Asian in a beat me to the punch for reviewing La Morena. Oh well, maybe I wouldn’t share in their relatively glowing reviews. Maybe I would find the tacos to be overpriced, under stuffed, and of poor quality. Maybe I’m straying into the world of hyperbole, but I’ll let the tacos speak for themselves.

I really wonder how people find these sorts of places. I’ve driven past La Morena dozens of times and have never noticed the little Latino shopping mall that’s hidden behind Sal & Phil’s. I even drove past the entrance the first I went looking for it.

Just as confusing as the location was the initial realization that the ladies behind the counter don’t speak much English. I, the blissfully ignorant, stroll to counter and ask for one of each of their tacos. The lady behind the counter counters with a inquisitive “tacos?” I respond, “yes, one of each please”. It wasn’t until the helpful owner interjected with a quick “uno de cada uno” that I realized I should use my high school and collegiate Spanish, but it was too late.

More than a little mortified, I took a seat and started to guzzle my bottle of delicious mango flavored Boing and waited for the tacos to arrive. 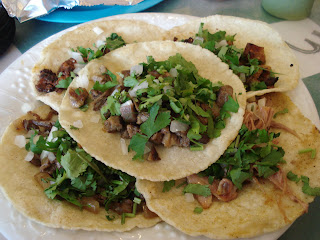 Imagine my surprise when a plate of five tacos was brought to my table. I say surprised because there were eight taco options on the menu, maybe I interpreted “uno de cada uno” incorrectly.


I decided to just ignore the three lacking tacos and focus on what I had in front of me. 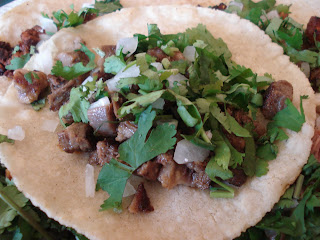 The tongue taco was on top, and it was just what you look for in a tongue taco. The meat was well cooked, just a little fatty, and well complimented by the helpings of fresh onions and cilantro. 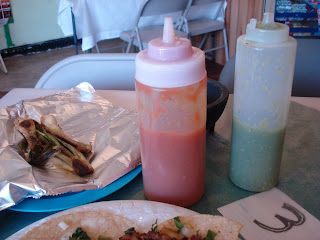 What really made it a great taco was the salsa. You’re given a choice of green and red and while the green is nice with a feint heat, the red salsa was my favorite. Once that lengua taco was topped with some fresh limes 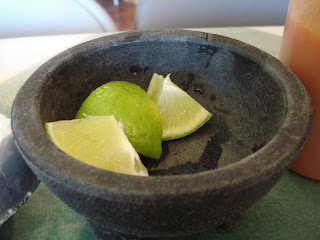 and a good helping of red salsa, you had a match made in heaven.

Next was the pork or pastor taco 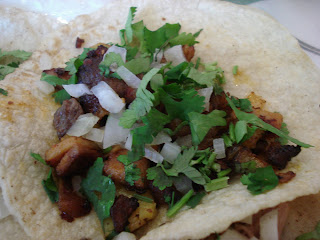 I wasn’t quite sure why there were chunks of pineapple in the taco, but I suppose it tenderizes the pork. 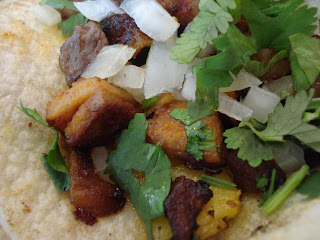 This was a quality porky taco, each piece of meat was crusty, crunchy, and pretty damn tasty.

The next taco is the suadero taco. 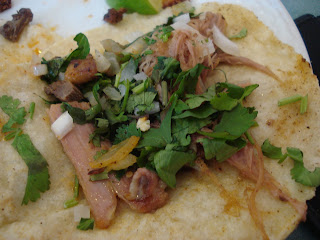 I’m still not sure what suadero means. I’ve read conflicting explanations on various websites; some say it’s a cut of brisket, others that it’s the oddly titled “rose meat”. In some cases, people say the rose meat is sourced from near the udder. Regardless of the origin, this is a very tender cut of meat, but I quickly found it to be dry and a little stringy. I’ve still got mixed views about this cut of mystery meat.

As I made it to the fifth and final taco, I was noticing just how doughy the taco shells started to taste. This was very surprising because at first I though these to be the best taco shells I’d had in . I suppose it’s a case of too much of a good thing.

The last taco for the day was the carne asada taco. 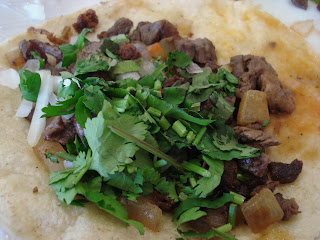 Honestly, after the other four tacos, this one seemed bland. Even after dressing it with plenty of red salsa and lime, I was nonplussed with this taco.

Of course, I can’t end this on a dour note. I have nothing but high praise for the ladies behind the counter, and the very helpful, talkative owner. He was more than happy to serve as an impromptu translator and to show me the various parts of his restaurant and attached store.

Even better, my first visit to La Morena wasn’t a fluke. I soon returned with Sam in tow. The tacos were just as tasty, the red sauce just as a fulfilling and we left with the promise of brain tacos or tacos de cessos.

It’s seems a little odd that there are three tacos places within a mile of each other on Old Canton and County Line Road, but you really can’t go wrong with any of them.

Omonia's taco al pastor (sp?) also has pineapple. I love it! I ate at La Cazuella Monday night and instantly regretted being there instead of Omonia. Now I'm going to have to try La Morena. Thanks

As far as I know, al pastor is always cooked with pineapple (to tenderize it, you're right), and I think the pineapple is what makes al pastor my favorite kind of taco. How much of the pineapple ends up in the taco varies from place to place, though. I prefer a fair amount in mine!

-I'm not sure if I'm supposed to say sorry or you're welcome. Either way, enjoy the tacos al pastor.

-Thanks for the tidbit on pineapple and al postor. Do you have any insight on the origins of suadero?

I always thought suadero was brisket--I know I have seen it translated that way in some taquerias--but now I'm curious because it does seem like there's some disagreement about that on the internet. Maybe it can mean different things?

La Morena's tacos are disappointing when compared to La Guadalupe's. At La Morena you get meat, onions and cilantro. At La Guadalupe, the tacos are filled with lettuce, onions, cilantro, sour cream and freshly sliced avocado. I can't remember but there may be tomatoes in there as well. At any rate, since I usually don't eat that many vegetables, I leave La Guadalupe feeling as though I've had my recommended vegetable servings for the entire week. Cynical Cook's photos vividly show the difference.
Warning - if you haven't tried the Tres Leches cake at La Guadalupe, don't unless you can easily afford the calories. It is unbelievably good and you'll be thinking about it every day.

Traditionally tacos are served with cilantro onions and radishes(pineapple with al pastor)not tomatoes lettuces and avacado. If that is what you are into I hear that Taco Bell has a nice spread.