It’s been a few months since Ding How started serving dim sum back in December. My initial impression was quite favorable. The people at Ding How were trying something new and like any new process there were a few kinks to work out. Now a few months later, it’s time to see what has changed with the dim sum at Ding How. 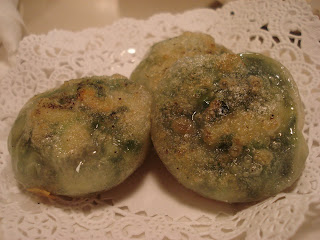 Well, these dumplings are still excellent. There are not too many chives and plenty of shrimp, all wrapped in a nice pan fried crust.

A new dish on the cart was the fried crawfish tails. 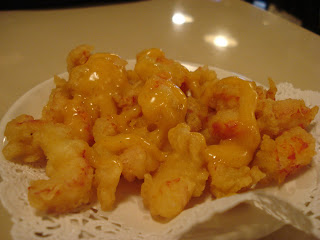 What you see is what you get here. The batter was a little thick and doughy and the sauce on top was too sweet, but I found these to be quite good with a simple dip in chili sauce and soy.

I tried the soy fish roll again, if just for the bean curd wrapper. 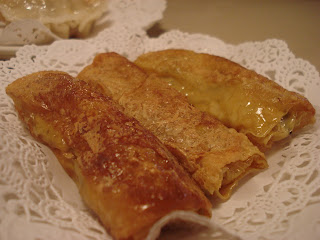 Maybe I’m too used to the bulging seen juk guen I get at other dim sum restaurants, but these roll just doesn’t do it for me. The wrapper is nice, but the fish inside doesn’t bring very much to the table.

Just when you thought that dim sum in Jackson was ambitious enough, Ding How decides to take another step forward. 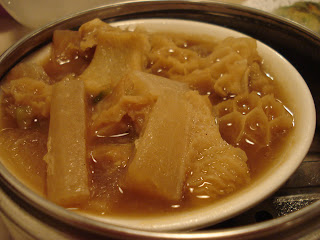 Ladies and Gentleman, that is tripe from the dim sum cart, more specifically it’s tripe with turnips. I again applaud Ding How for venturing into a wide array of dishes, but this is not a stellar example of offal. There really doesn’t seem to be any flavors at work here besides boiled trip and turnip. This really is just a big chewy dish. Could I at least get a little black vinegar or ginger?

As before the pork spareribs (pie guaw) were quite lean. 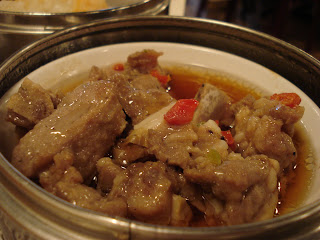 There’s still not very much black bean flavor and none of that unctuous texture that I love, but these spareribs are very meaty.

Moving back to the dumplings, I picked out an order of siu mai. 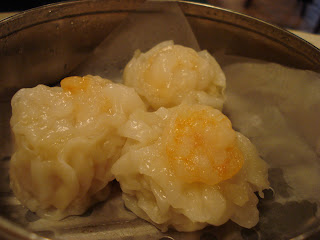 I wasn’t told if these were shrimp or crab, but it didn’t really matter. The texture inside was a very mushy consistency.

The next dumplings were significantly better. 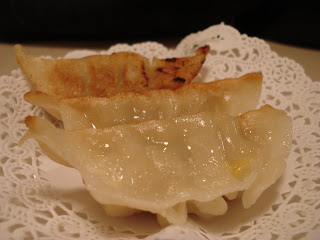 There really isn’t much to say here. They were simple pot sticker pork dumplings, and not too shabby.

I’ve written before how Ding How has a different take on the classic fung jao or chicken feet. 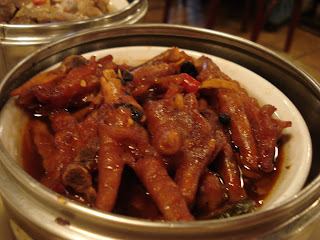 The feet are still steamed instead of fried and steamed, but just look at how many are in a serving. The waitress explained they get the chicken feet from Houston and the order simply had small feet in it this time. Size and quantity aside, these chicken feet were actually quite spicy, and with plenty of garlic to boot.

Steamed dumplings were next from the cart. 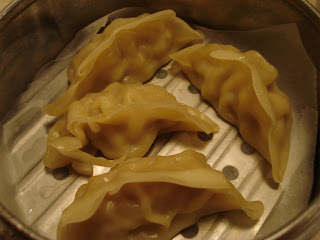 There was a real mish mash of flavors in these cold dumplings. I think I’ll stay away from these next time.

Here we have an order of shrimp and vegetable siumai 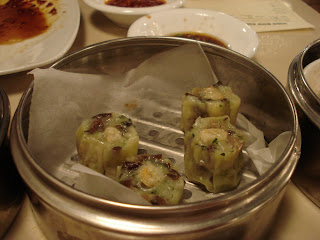 Much better than the previous siumai, there were lots of bamboo shoots in this stuffing. There was a little veggie flavor to compliment the shrimp making this a pretty tasty dumpling.

This last dish was something I tried on a whim. 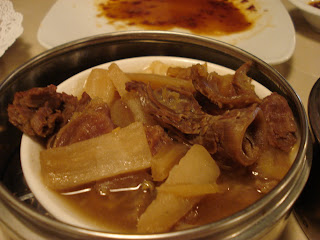 Labeled as flank beef with daikon or braised beef nam, I was warned this would be chewy. I think chewy is an understatement. The daikon had been cooked to nothing, and try as I might, I couldn’t appreciate the texture of rubbery beef. I know Chinese cuisine is full of texture and tastes that seem odd to the western palate, but I’m just not seeing the point of this one.

It might sound like little has improved from the first time I had dim sum at Ding How. Well, I suppose you can chalk that up as consistency, however there was one annoying feature. I had forgotten there was a menu for dim sum. It was only when I was done with the meal that the waitress reminded me there are many more dishes that have to be special ordered. That’s all well and good, and next time I’ll remember, but what I’m really interested in is the regular menu at Ding How.

They have some interesting dishes that you just don’t see in Jackson, things like kalbi and peking duck, but that requires a four day notice. Like at dim sum, there’s a special menu for the regular dining hours, but it’s not for the faint of heart. I desperately need to try the Sichuan favorite, chong quing fish, but I’ll have to find help to try one of the several intestine dishes from the special menu.