After the bead, beer, and sweet potato queen filled haze that was the St. Patrick’s Day parade, Alvin, Kate, Patrice, and I were in desperate need of something messy and satisfying. Barbeque could fit that order, but we had our minds set on crawfish. I lobbied for the Crawfish Hut, but was quickly shot down by its lack of dine in options. By a vote of 2 to 1 with 1 abstention, I drove though the shuffling masses of downtown and hit Lakeland for the Crawdad Hole.

I actually wrote about the Crawdad Hole near this time last year. The company golf team had won a gift certificate at a School fundraising tournament, so that meant a crawfish lunch for everyone. Even though it’s hard to naysay a free meal, I was unimpressed by the Crawdad Hole’s crawfish. I found them salty, gritty, and generally unappealing. Maybe a year later and dining in will change my opinion.

Pulling into the parking lot, it was painfully obvious that many people shared our idea of a post parade crawfish dinner. After parking, ducking past the bouncer and his outrageous $10 cover, I volunteered to go get the crawfish. I was third in line when the order window was shut and everyone was left out in the cold. I know crawfish take time to cook, but with as many people as were there, this was poor planning.

It was a 20 minute wait before the next batch of crawfish would be ready. Bored in line, I began sending hateful texts to Alvin and Kate saying we should have gone to the Crawfish Hut. About 15 minutes into the wait, a man emerged from the kitchen and began taking orders. Wanting to make the wait worthwhile, I went for a full 15 lbs of crawfish, potatoes, and sausage.

I’ll concede that when the Crawdad Hole says 20 minutes, they mean 20 minutes. After the stated time had passed, the window opened and the cooler of fresh crawfish hit the counter, ready to be weighed and distributed. 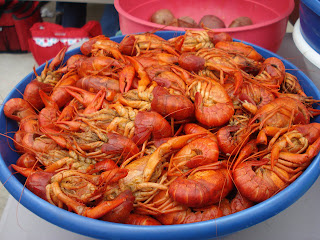 This was one of the three bowls that made it to the table. Was it worth the wait? The crawfish were hot, there was good company, and a pretty good blues band on stage; it was definitely a case of the food being a part of the atmosphere, not the main attraction. 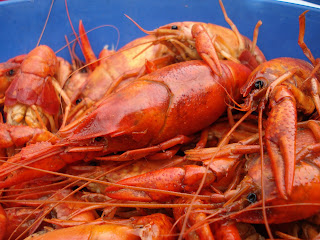 This time the crawfish were larger, relatively free of grit, and thankfully not as salty. I did find them lacking any real punch. There was a decent background of the typical crawfish flavors: bay, lemon, cayenne, but no real heat to wrap it all up. 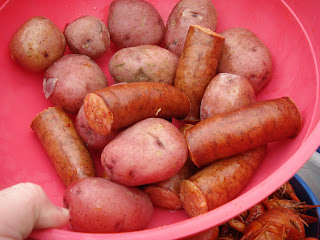 All the boiled potatoes were just that, boiled potatoes. They weren’t anything exceptional. The sausage, labeled as Cajun sausage, was quite odd. The stuffing had been too finely ground and salted, making it a somewhat spicy cafeteria hot dog.

While trying to liven up the potatoes, I found what I thought was to blame for all the saltiness I experienced last time. On each table was a large jar of some Cajun seasoning mix. After trying a few shakes on a potato, I found it to be nothing but red salt.

All negatives aside, we made quick work of all the crawfish. 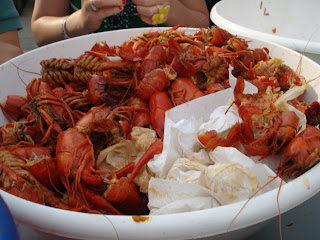 In fact the only stragglers were two potatoes. There was simply no room left for the tubers. After the meal, my opinion had changed slightly. The crawfish at the Crawdad Hole aren’t too bad. There seem to be some kinks in their serving process, but I suppose it was a busy Saturday and they might have been overwhelmed. Still, I’ll come to the Crawdad Hole for the music, the food, and the overall experience. When I want to eat high quality crawfish, I’ll still go to my favorite, the Crawfish Hut on Old Canton.