In Jackson, there’s a small pool of Asian cuisines to choose from. You have your standard Chinese buffets, Japanese sushi bar & teppanyaki, Thai, and a Vietnamese pho restaurant. One thing that’s painfully missing from the list is a Korean venue, specifically for bulgogi and kalbi. Until the situation changes, it looks like I’m on my own for Korean bbq. However, I’m not without guidance. With a copy of “The Korean Table” by Taekyung Chung and Debra Samuels, I’ve got the ticket to a tasty Korean meal.

Originally I planned to make both two types of kalbi and bulgogi. Unfortunately, I didn’t manage my time well, and I decided to stick with one type of kalbi. Barbecued Beef Ribs or Sokalbi Gui looks to be a pretty simple recipe. There’s only 7 ingredients on the list, but don’t be fooled. The first ingredient in the marinade is Sweet Soy Sauce Base Sauce. It looks like this kalbi is a two part process.

Actually it’s not that difficult. 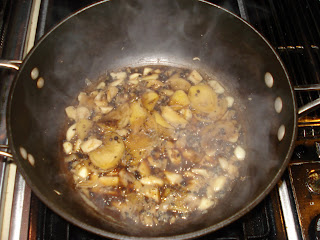 First 1 cup of water, 16 cloves of thinly sliced garlic, a 2.5 oz piece of peeled and thinly sliced ginger, and 2 tbs of crushed black peppercorns are brought to a boil and then simmered for 10 minutes. 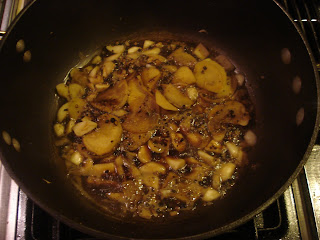 The simmering really brings out the full force of the smells. 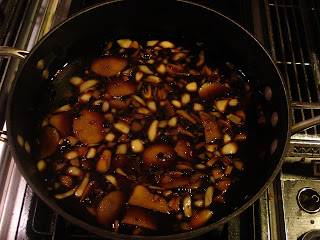 Next 4 cups of soy sauce, 2 cups of light brown sugar and 1 cup of red wine are added to the pan. This mixture is boiled for 2 minutes and then left to cool to room temperature. 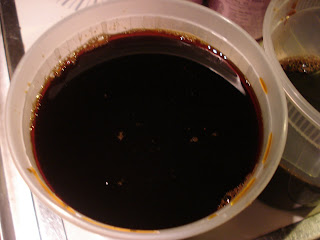 After cooling, the mixture is strained and ready for use. This was supposed to make 8 cups of sweet soy sauce base, but I seemed to have come up a little short.

With the sweet soy sauce base made, I could start constructing the marinade for my kalbi. 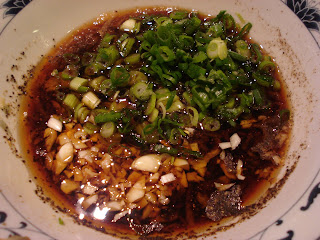 2/3 cup of sweet soy sauce base, 1 tbs minced garlic, ½ cup minced green onion, 2 tbs dark sesame oil, ¼ tsp black pepper. The marinade also calls for 1 small apple, grated with skin on. Seeing as I had just come back from Houston loaded with Korean pears, I used ½ an unpeeled pear instead. The only thing that worried me was the amount of liquid. This doesn’t seem like very much marinade for 3 lbs of ribs.

Speaking of the ribs, here are 3 lbs of beef short ribs. 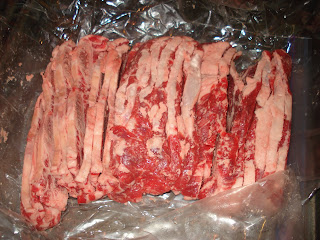 Instead of butterflying them, I had Angel at Paul Anthony’s cut them into ¼ inch slices. It may seem odd, but that’s the way they sell them at H-Mart. 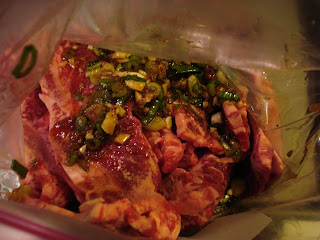 The ribs and the marinade go into a large plastic bag and into the fridge for a overnight soak.

The next morning I made sure to flip the bag to ensure every ribs got plenty of marinade exposure. 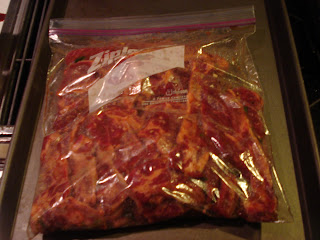 Here they are fresh from the fridge. 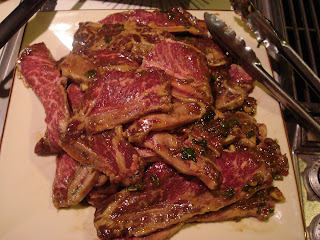 I gave them a solid 25 minutes to come to room temperature. While I was waiting on that, I boiled and reduced what was left of the marinade.

Maybe it was because it was already 9:30 on a Sunday night. Maybe it was the fact it was 40 degrees and windy, but I didn’t feel like firing up the grill to cook the kalbi. Looking to make the best of a lazy situation, I fired up my grill pans. 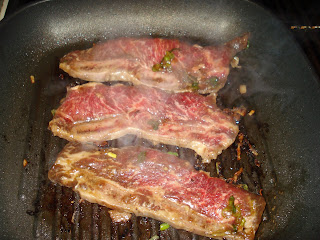 It may not be the best option, but it worked quite well. In no time at all, I had all of the short rib slices cooked over medium high heat. 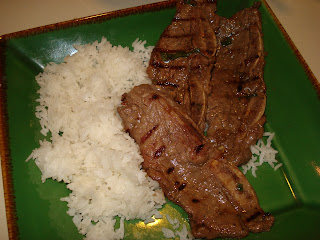 Served with a little white rice, these short ribs were something I had been sorely missing. There was plenty of potent flavor from the marinade, particularly the sweet soy sauce base, but the full flavor of the short ribs stood up quite well. With the coming of warmer weather, I’m sure the next time I’ll have proper, outdoor grill marks on the kalbi. Until then, this will satisfy my craving for Korean bbq.