I will freely admit that I wrote off Jerusalem Café years ago. When I first returned to Jackson in the summer of 2007, I was surprised to see that the old El Ranchero was gone and replaced by a Mediterranean restaurant. Intrigued by the idea of competition for Aladdin, a few buddies and I tried it a little while after it opened.

I remember two rather shocking things. The first surprise was the number of hookahs they had. Of course, this shock quickly faded into disgust as I found that the hookahs had filthy stems, filthy water, and bargain basement shisha. The second and more pertinent shock was that the wait staff at Jerusalem Café seemed to be the same one from El Ranchero. Judging by the numbers of underage drinkers in the bar, I expected to see Hector dishing out shots of rotgut tequila in the back. Well it’s been a few years and I wanted to see if anything had changed from the greasy, poorly made food I was served a few years earlier.

Walking in at 1 in the afternoon, it was a ghost town. There was no music, just the sounds of Spanish emanating from the kitchen. I was soon greeted by the lone waiter and shown to a table. It’s your typical survey of Mediterranean cuisine, a kebab here, a gyro there, maybe a few grape leaves and falafel for variety. What did catch my eye was the Arabic coffee on the back on the menu. Ever since my friend Sam got me hooked on the stuff, I’ve been on a relaxed hunt for the caffeine packed beverage. 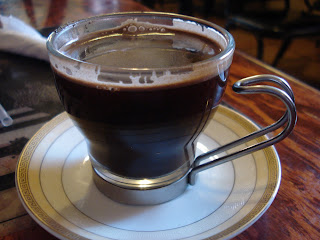 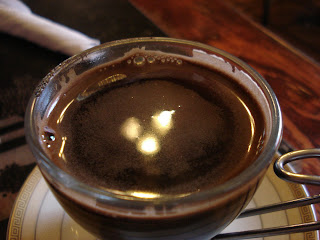 However, it’s far from the coffee I know and love. The taste is watery and stale, and in no time at all the coffee separated. Avoid this small cup of disgustingness at all costs.

As horrible as the coffee was, I was actually quite happy with the salad that came with my entrée. 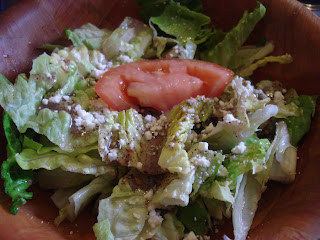 There’s nothing exotic or fancy about this salad. It really is nothing but lettuce, oil, vinegar, and feta cheese. You can’t get much simpler than this, but it works.

Maybe you’re like me, when I first saw my order of fried haloumi cheese, I wondered who was mad at the cheese. 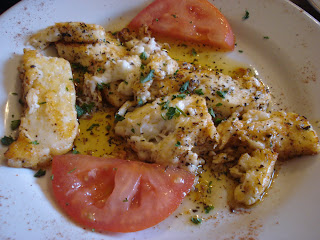 However, looks really aren’t everything as this cheese had a pretty good flavor. 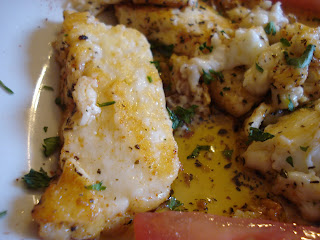 Apparently that aggression had resulted in a nice crust and a nice balance of oil, garlic, and parsley. Surprisingly there was even a little spicy kick to the cheese. It may have been unintentional but it worked out for the better.

Falafel, it may be a vegetarian favorite, but few people will turn down this deep fried treat. 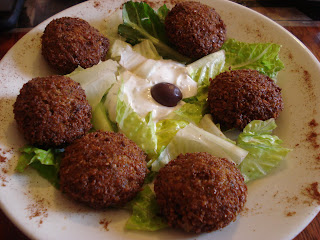 They apparently have a good fryer at Jerusalem Café, but these falafels were bland as wallpaper paste. 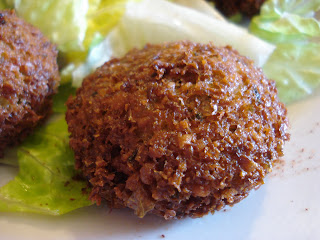 Actually, I thought these chickpea patties tasted like plain fried cornmeal. The accompanying dipping sauce, a standard plain tzatziki, was no use either. This could have been a passable falafel if the kitchen knew how to use their spices. That being said, it’s still miles ahead of the worst falafel in Jackson, the specimens from Keifers.

Moving past the appetizers, it was time for the entrée, the lamb kofte kabab. 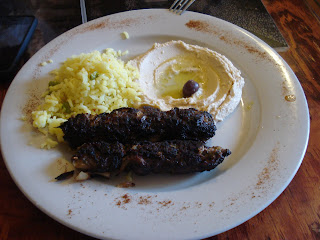 Well, there’s no sugarcoating it, these kababs look pretty ghastly. 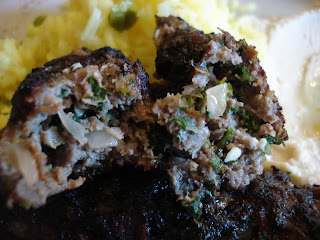 Inside there are big pieces of onions, a few specks of parsley, and the occasional odd bit of cayenne flavor. On the whole these kababs were burned, overcooked, and perfectly dried out. 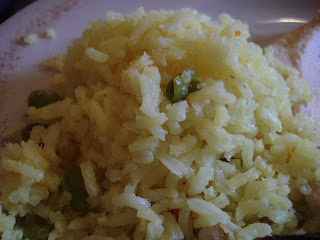 The accompanying rice tastes all right, but salty. 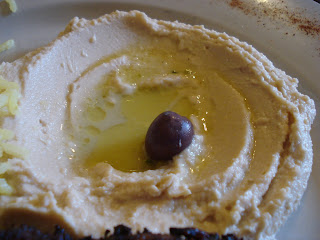 As for the hummus, I was pleasantly surprised. There was a very lemony flavor to it along with a subtle hint of garlic.

Well, that was it for the first visit to Jerusalem Café, but I figured it was due a second at the very least. So a week or so later, I dropped back by Jerusalem Café for another lunch. No more a ghost bar, there were a whole two people there for lunch! 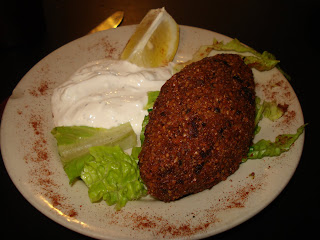 What the hell is this? I know fried kibbeh is often shaped like a bomb, but this looks ridiculous. 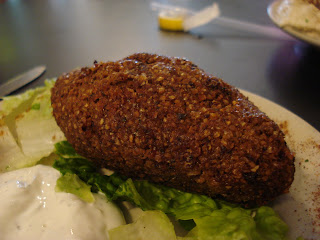 Surprisingly, the center was neither raw nor frozen, but it was still a bland piece of kibbeh. A combination of odd presentation and poor flavor makes this just a waste of beef, bulgur wheat, and pine nuts.

One appetizer that stood out on the menu was the Israeli hummus. 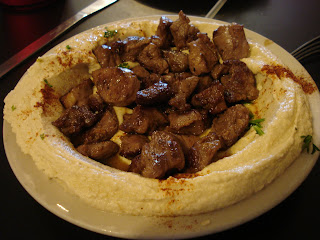 There’s not much mystery to this dish, it really is just hummus with sautéed chunks of lamb. 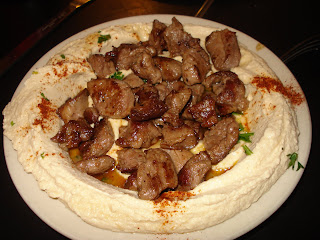 It’s a unique and odd combination. The lemon flavor of the hummus works with the lamb, but it seemed like every piece of lamb had gristle. I don’t know how authentically Israeli this dish is, but I actually liked the combination, I’d just use better lamb next time.

Since I had come away disappointed with their kofte kababs last time, I decided to see how Jerusalem Café could handle chicken and the ubiquitous gyro. 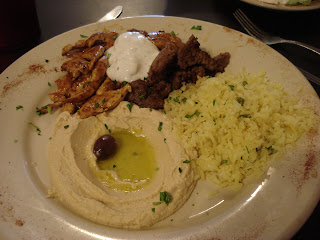 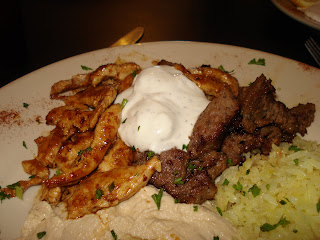 You can see that the meat in the dish actually looks quite juicy. 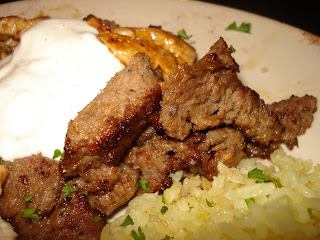 It looks like the strips of gyro meat have been finished on the griddle, but they have a different taste, cumin maybe? Regardless, the good salty crust is the highlight of the gyro meat. 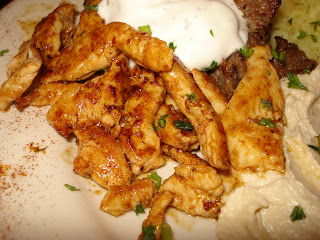 As far as the chicken, it looks quite juicy but it’s a different story when you take a bite. There’s nothing memorable about the chicken, it’s plain white meat chicken that quickly disappears beneath bland tzatziki sauce. Overall another mediocre to poor dish.

I really had no intention of eating dessert, but I decided to see if the Latinos in the kitchen did anything interesting with the baklava. 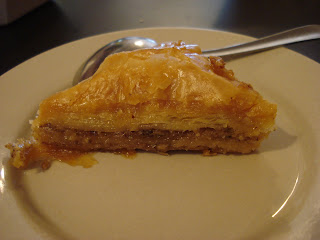 Well, they didn’t. There was a slight cinnamon taste to the first few bites that quickly subsided. 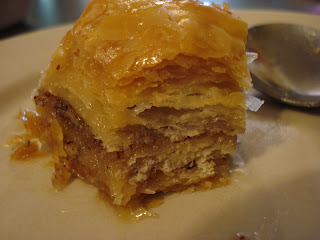 Instead there was nothing but dough and honey, no nuts, no real flavor. Just a solid brick of honey and phyllo dough, I’m not sure how old this piece of masonry was, but it definitely had some shelf life on it.

So, two meals later what did I come away with? There are some decent things at Jerusalem Café. It’s definitely not as terrible as I remember, but that’s far from praise. Actually this is just mediocre Mediterranean food, even for Jackson. Despite the nice, lone waiter, this really was a waste of time. A decent hummus and appealingly salty gyro meat doesn’t warrant a visit. If you want a gyro, go to Wraps. If you want a kabab, go to Aladdin, even if Aladdin’s kababs are overcooked, they aren’t as bad as here. The bottom line is if you find yourself looking for a break in the monotony, go somewhere else.

Actually I went to Bone’s looking for something relatively light, maybe a soup and salad or a steak sandwich at the most. However, I quickly remembered, this is a steak house and I don’t come here often enough, I need a proper piece of beef. Also, the last time I went to a steak house and ordered something besides steak, it didn’t work out too well.

Here’s a bit of an odd sight, random vegetables at a steak house 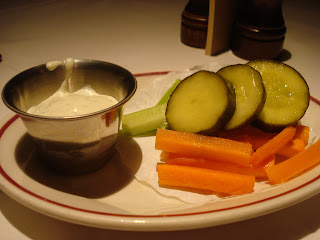 Don’t worry, there’s plenty of quality ranch to negate any healthy benefits of those veggies, good pickles too.

To me, there’s a sublime simplicity to a proper shrimp cocktail. 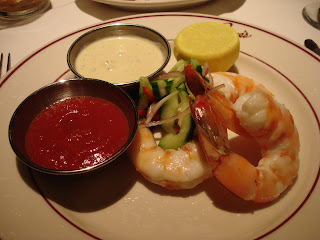 It’s that combination of cold, jumbo shrimp and horseradish saturated cocktail sauce that makes it worthwhile. 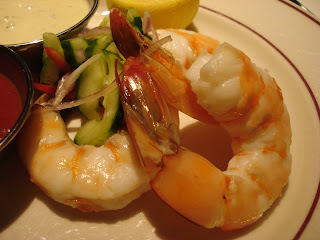 The shrimp had a satisfying snap and there was a quality cocktail sauce for the dipping. You’d best savor these shrimp as the price is a little staggering, but it’s worth it.

With my steak I decided to try a side of grit fritters. 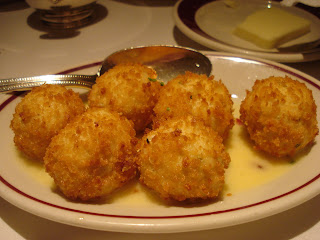 There’s a tender, crispy crust to each one of these fritters and a creamy center lurks just beneath that crust. Actually these fritters tasted like they were made with mascarpone cheese. Even so, they were a little bland inside. I thought the accompanying cream sauce would help, and while it’s quite nice, it too needed a good shot of pepper.

Dry aged, bone-in, these are some very necessary adjectives for one my favorite steaks, the ribeye. 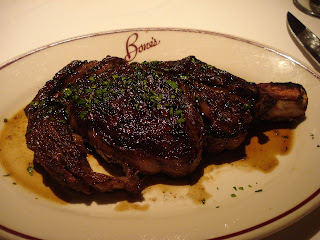 I immediately noticed a small fault with this steak. There wasn’t a real thick, heavy crust that you get from a high heat sear. 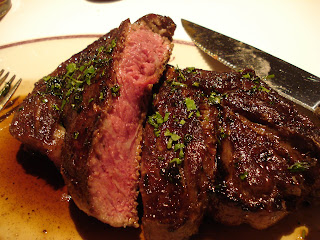 Even without the crust, this was an excellent steak, well cooked to between medium-rare and medium. Each bite brought that big, beefy flavor that I expect from a quality steak house selection. It’s hard to find something new about steak, but believe me, this ribeye is that good.

One bit of advice I’ll give is to skip the fritters if you’re ordering a steak. This isn’t a slight towards the steak or the fritters, but the rich fritter sauce completely coats your tongue and keeps you from truly enjoying that ribeye. Thankfully the waiter left the pickles on the table. All that brine helped cut through the fat and let me savor the dry aged goodness. Other than that, Bone’s really is as good as they say. It’s that classic combination of dark wood, excellent service, high quality beef, and good whiskey, and one of my favorites.

Posted by Cynical Cook at 8:33 PM No comments:

Seeing as we had enjoyed a huge meal at Tuk Tuk, I had no intention of ordering anything, but fate intervened. Out of the blue, someone asked if there were any burgers left, and wouldn’t you know there was one or two left in the kitchen. 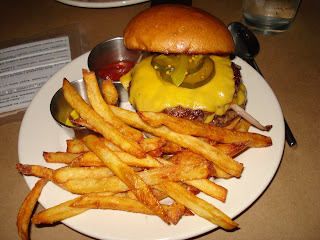 There’s nothing I can say that hasn’t already been said by the numerous denizens of the Atlanta blogosphere like Blissful Glutton, Foodie Buddha, Chow Down Atlanta, Eat It Atlanta and Live to Feast. 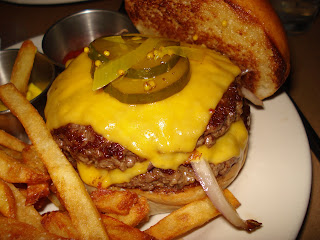 Best burger is always a lofty claim, but this is probably the new benchmark for me. Honestly, I never eat pickles or onions on my burger, but here they just worked perfectly with the burger.

Oh yea, they had some sort of toffee dessert too, but only after Aaron and Jennifer whined their way into it. 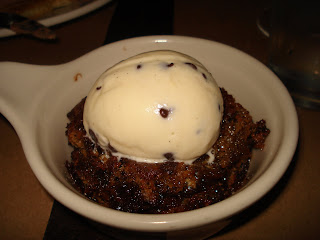 I might be making that last part up, but it was pretty damn good. Not quite as good as the sticky toffee at Feast, but still excellent.

If there is one thing I would say about this burger, it’s this is what a gourmet burger should be. So, I doubt any of my Majestic Burger critics still read this site, especially after I called them out for posting anonymously, but if they do, this is a gourmet burger. In short, take that Majestic Burger and shove it up your ass.

Posted by Cynical Cook at 8:06 PM No comments: