As soon as I had finalized my plans for my trip, I started doing a little research. It had been nearly a year since my last visit to the area, and it’s a given that things had changed. After searching the a variety of local blogs, urbanspoon, and chowhound, there was one restaurant that was a consistent favorite: Sichuan Cuisine. Being a big fan of that “ma la” effect of the Sichuan Peppercorn, Sichuan Cuisine was on my definite short list.


It was my last day in and in between my stops at the various grocery stores, I plugged Sichuan Cuisine’s address into the gps and was soon seated inside. Seeing as I was the only one there, I was probably a little early for lunch, but I stopped worrying as soon as I saw the menu. It is a vast effort, and I quickly recognized many favorites. After convincing the waitress that I really wanted to order that many dishes, it was just a waiting game.

The wait was a short one. I have no idea how they cooked the dishes so quickly as it was less than 10 minutes from my order to everything on the table. All speed aside, everything looked excellent and the first dish I tried was the dan dan noodles. 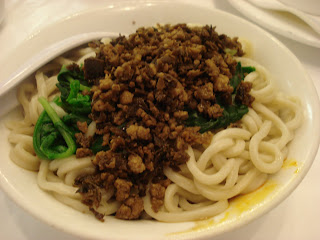 Looking much different than what I make at home, the waitress to me to mix everything before eating it. 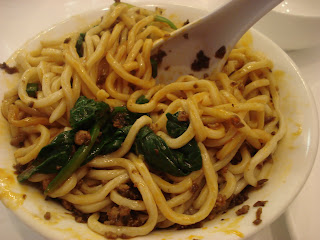 Plenty of sauce was at the bottom of the bowl, and it made for a delicious dish. There was a little numbing from the peppercorns, but not as much as I was expecting. Regardless of numbing, those thick, fat noodles were perfect for the small amount of pork and vegetables.

Boiled Beef with Spicy Sauce was my next dish, and what a difference from Fu Fu Café. 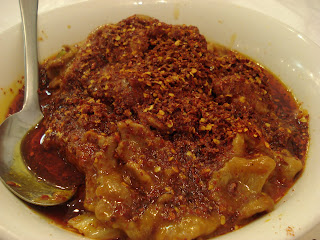 Seeing as it was literally covered in pepper, it was no surprise when I began to experience the full “ma la”. 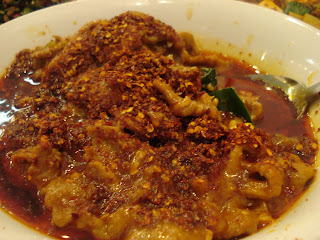 Underneath the beef was a lot of cabbage which turned out to be a very nice foil to the slices of beef. One thing I found surprising was the beef in this version was not as tender as Fu Fu Café, but the dish at Sichuan Cuisine didn’t seem as oily. Either way, this was an excellent dish; it alone was worth the trip.

However, I was far from done as I next moved to the Dragon Wontons or Sichuan Style Wontons. 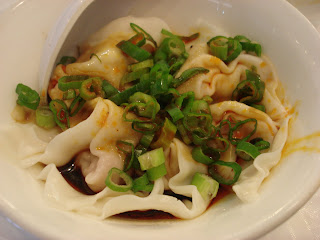 There seemed to be a lot of extra wonton skin here and inside there wasn’t very much pork, but the chili sauce underneath more than made up for any shortcomings. It’s amazing that this dish cost less than $3

Moving on to a chicken dish, I went with the Chong Quin Crispy Spicy Chicken. 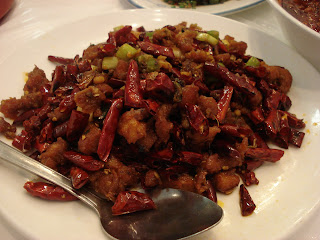 At first I was overwhelmed by the sheer number of chilies in this dish. 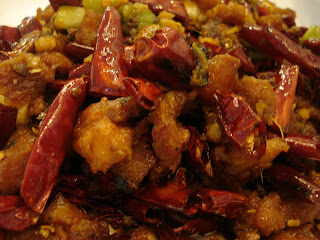 I soon found that each piece of chicken wasn’t that crispy but it wasn’t the least bit dry. The waitress has said it was similar to king pao chicken, but I think this was far superior. Sure it was a little salty, but the growing background heat and delicious chicken made me keep picking out each piece of chicken.

The next dish was centered on pork again. 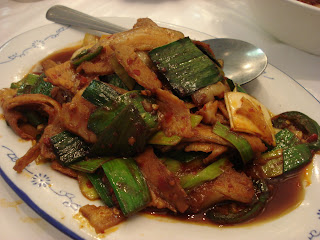 Twice Cooked Pork was a dish I read about on Chowhound and I was a little underwhelmed. At first it does look a lot like fatty, undercooked bacon, but underneath is a very nice sauce. The greens provide a much needed textural contrast, but I’m just not a fan of this dish and it’s seemingly undercooked pork.

Here was another dish I got from Chowhound: Sauteed Ground Pork with Cow Bean. 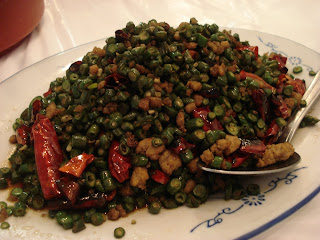 This had a fascinating presentation. It looked like it was covered in chives. However, I’m still not sure what a cow bean is, but I think it’s a Chinese long bean that was cut into very small pieces. 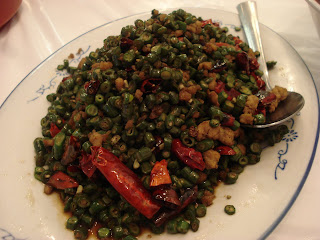 Regardless of what they actually are, the beans were cooked perfectly, with a very toothsome texture. After that the pork blends in well with just enough heat to keep things interesting. Trying to eat this dish was a real exercise in chopstick control.

After all that, there’s still one dish to try: Ma Po Tofu. I only ordered this to see how it differed from Fu Fu Café’s version. 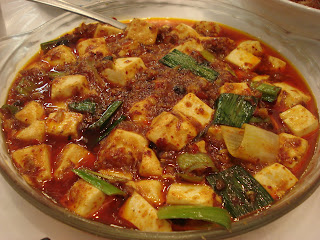 I’m amazed at how they maintain such large chunks of tofu. Past that, there is a very oily dish. There is a slight numbing effect and a nice level of heat, but the real key is the contrast the small pieces of ground pork give to the silken chunks of tofu. Even though this seems like the oilier of the two, I’ll have to give the nod to Sichuan Cuisine for the better version.

Just to make things clear, I did not eat everything at the table. I had plenty of leftovers to bring back to . While the waitress was packing everything up, it gave me a chance to think about all that I had just tried. I think the boiled beef with spicy sauce was my favorite dish, but there the Sauteed Ground Pork with Cow Beans would be a close second. One thing that is hard to beat at Sichuan Cuisine is the price. I still can’t believe I got all that food for about $50. However, the best is yet to come. I’ll have to wait to have company before I can try the house specialty, the Hot Pot. I suppose that leaves me with something to look forward to during my next trip to .

I think the "chow" part of chow bean meant that it was pan fried beans. It's not a type of bean, it's the way it was made. I believe.