I never need a good reason to visit Houston; there are always plenty: friends, family, the groceries, and of course, the food. However, my buddy Frank gave me a really excellent reason, a going away party. Well, not a party in the traditional sense, more of an excuse to stuff ourselves silly, but I had a few days before that would take place and I needed dinner. Thankfully my uncle was kind enough to provide lodging and a dinner companion, so we went to Rice Village in search of a Friday night dinner.

In a city the size of Houston, there is a seemingly endless array of options, but as with any city, I had done some research before travelling. As we were driving around Rice Village, I noticed Shiva Indian, a restaurant that a consistent part of everyone’s best of Houston list. After a little passive aggressive arm twisting, we found parking and headed inside.

Looking through the menu, I found many of my favorites, but with different names. After realizing that Shiva had simply put the Hindi words for the proteins, it was relatively smooth sailing. However, I was very enticed by the Murgh Chili and Jhinga Chili, if only because they were labeled as “Not for the faint hearted” and “Only for the daring”. Even with that enticement, it took a few minutes of deliberation between me and my uncle before we had our order in.

After a relatively short wait, the dishes began to arrive. The first on the table was the Goa Jinga Curry, a shrimp curry with a “spicy blend of coconut and cayenne pepper”. 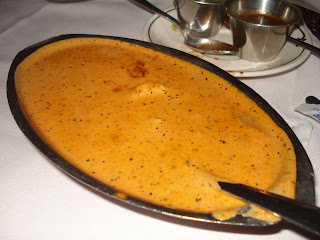 Well, it certainly had the creamy appearance of a coconut milk dish. I can only assume those dark specks are the cayenne pepper or some other spice. 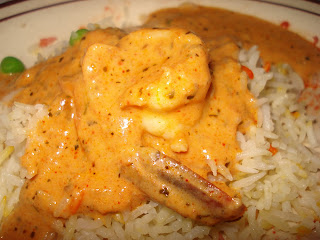 The shrimp were very well cooked, but in short supply. We only received 7 to the order, but what really annoyed me was that I couldn’t pick out the flavors. This was a very nice dish, but due to my limited background in Indian cuisine, the flavors left me perplexed.

Next was the Gosht Vindaloo or lamb in a “hot and tangy Goan style curry with tomatoes and potatoes”. 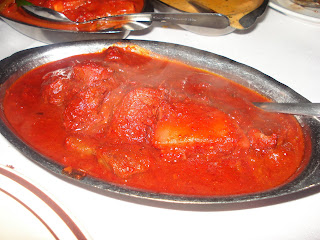 This was the first time I’ve had a properly spicy vindaloo, but I was curious about the trailing taste of vinegar. 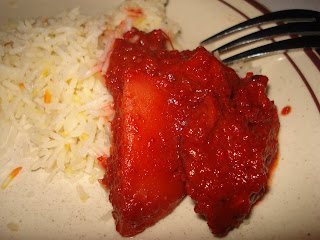 Unlike the shrimp curry, there was plenty of meat in this dish, and it was delightfully fork tender. Unfortunately, for as tender as most of the meat was, there was the occasional dry and overcooked piece. I suppose you can’t win ‘em all.

When it came to the third dish, I knew I had to try one of the dishes with a warning. I settled on the Murgh Chili or the “Not for the faint of heart” which was “stir fried in green chili, red chili and finished with peanuts and coconut”. 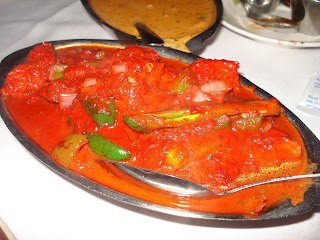 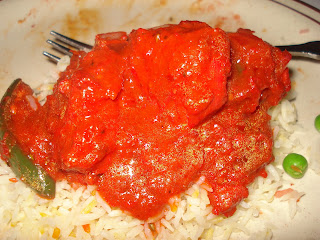 And with the flash, you get an interesting reflection from all the oil, but the taste? Well, it wasn’t the knockout spicy I was expecting, instead it had a slight trailing heat. There were plenty of sizeable, well-cooked chunks of chicken, along with big piece of bell pepper and okra.

Even though the spiciness wasn’t what I was expecting from the menu at Shiva, I was more than satisfied with the level of service. The manager was constantly checking to see how things were going, and when ordering, he was more than happy to offer his advice on which dish to order. One thing I had hoped for in Houston Indian food was a chance to try phall curry. Unfortunately, Shiva couldn’t satisfy that want, but it was a great meal regardless.