Every time I go to Houston, dim sum is a given. Fortunately or unfortunately, this means Kim Son on Saturday and Fung’s Kitchen on Sunday before I leave. Well this time I wanted something different. I realize that pretty much everyone agrees Fung’s is the best, but maybe one of the others have something a little different. It took a bit of convincing, but I got my Uncle and cousin to go along with my idea. So then we were stuck between Golden Palace and Ocean Palace. Leaving it up to my cousin, Jaime, she decided that the bigger was better. So it was down Bellaire to the Ocean Palace.

Situated in the same shopping mall as the Hong Kong Market, Ocean Palace really is an imposing restaurant. There are two stories, but the bottom was completely empty. Even upstairs, the massive dining hall was barley a third full. Aside from the emptiness, the first thing I noticed was a dirty plate. Sure, some people could pitch a fit over that, but it happens, so I just asked for a new one and all was well.

One of the carts was soon at our table and the first steamer tray touched down. 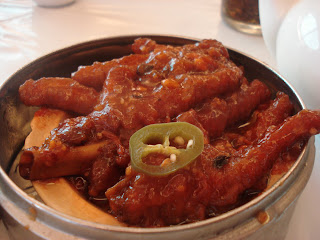 Chicken feet or Fung Jao, they really have become a favorite of mine. Here they were hot and fresh from the steamer, and plenty greasy & oily as well. A nice feature of the Ocean Palace version of this dish is the size. You might only get 3 or 4 feet, but they are quite large. Unfortunately, no combination of size and freshness could conceal the fact that these chicken feet were quite bland.

Next we picked out a nice order of tripe or ngow bak yip as my iphone app calls it. 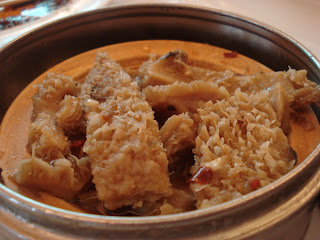 I can hear the boos coming, but is this first time I really went out of my way to try tripe during dim sum. Like I’ve come to expect, tripe cut this big was quite chewy, but this tripe was unexpectedly oily. At least there was a nice amount of chili to kick up the flavor.

After the chewy came the old standard, the litmus test, the ha gao. 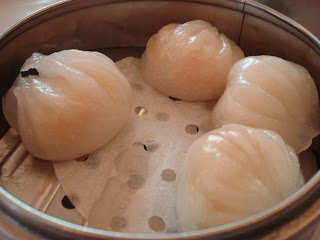 They look good, especially since you can see the pink of the shrimp poking through the wrapper. 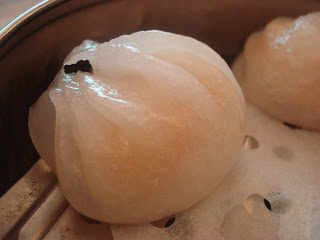 Well, the dough was actually very thick and inside was a disturbingly small amount of shrimp. There were big chunks of bamboo shoots, but that’s hardly a substitute for shrimp. In the end, whatever shrimp flavor was there was lost in the doughy wrapper.

Here’s another dish I rarely get at dim sum, the sticky rice but not inside a leaf. 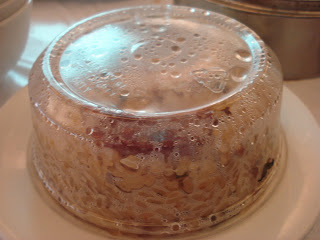 It looks pretty good with the plastic bowl on top. 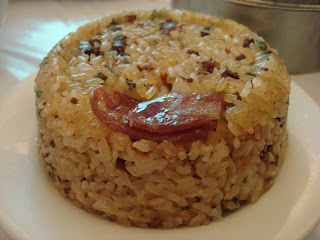 Those big pieces of Chinese sausage on top convey a false image. 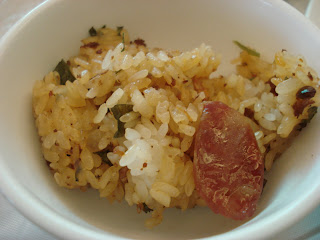 While there was a prevalent ginger flavor throughout the rice, this was a pretty dry and boring dish. I think the 2 pieces of sausage on top were the only ones in the dish.

One reason I was looking at different dishes is that there really wasn’t a lot of choice. Usually this problem occurs if I arrive at the restaurant at 11 am, but this was 12:30 on a Saturday. Thankfully a cart soon arrived with fresh pork siumai. 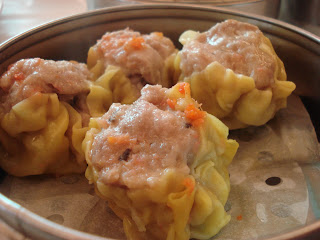 Hot from the steamer and full of porky goodness, it’s no wonder this is a dim sum favorite. This was one of the few things that Ocean Palace did well.

Looking to find something else, I walked by the steamer table to see what else was available. 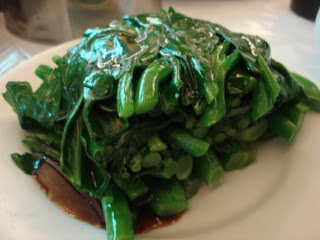 The Chinese broccoli or gai lan is always a crowd pleaser, but not here. A paltry amount of oyster sauce only let the overwhelming greasiness of the gai lan shine through. Even ignoring the greasiness, this broccoli was just poorly cooked.

Do you think the steamed leaf wrapped version of the sticky rice would be better than the other? 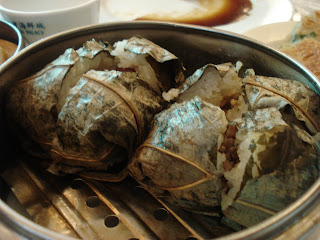 Well, it was. It’s still a little on the dry side, but there’s more meat filling and just a much more rounded flavor.

I’m not quite sure what this next dish is. When I saw it on the steamer table, I thought it was shrimp and scallion dumplings. 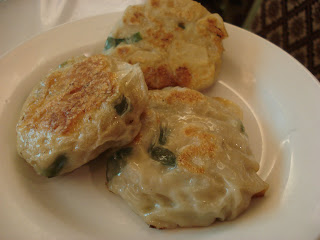 Instead it was something akin to fused layers of scallion wall paper. Apparently this had been on the griddle section of the steamer table for about a week. Sure there was a little shrimp flavor, but it wasn’t worth breaking my teeth for.

Another dim sum favorite is the pepper shrimp or jeung yeung tan jiu. 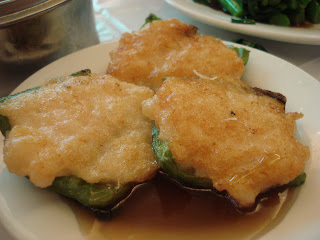 Here it’s another favorite gone sour. There’s no crunch of a fresh pepper, the sauce is watery, and the shrimp were stone cold.

I generally enjoy pork dumplings, and this type is always interesting. 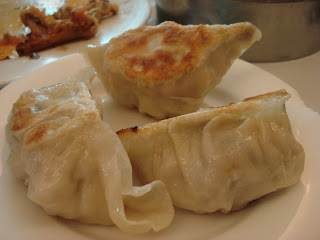 After all this, there was one last dish on the table. I call it the shrimp crepe, but it’s a rice noodle roll with shrimp or ha cheung fun. 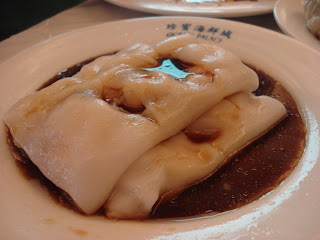 These rolls are always a fun dish, simply because it’s a game of chance. I just know that one way or another, some of that soy sauce will end up on my shirt. With this example, the shrimp were nice, but every other part of the dish was a letdown. The roll left a raw dough taste after each bite and the soy based sauce seemed very watery.

So, what did I come away with? Well there’s a reason this cavernous restaurant was relatively empty. There’s a poor selection of generally low quality dishes and the good people of Houston know that. However, if you look on Urban Spoon, the critics give it great ratings. Next time look closer; those reviews are from 2002, and there can be an immense change in 8 years. I suppose I should have known better. Fung’s really is the gold standard for dim sum in Houston, but it never hurts to try something else. At the very least, this dining experience just let me know how good the food is elsewhere.

But seeing as how this was posted in '10 I can't say much. The food has gotten better recently.

I saw a lot of websites but your site is very interesting . Thanks for great articles.