The New York deli is a real icon, an undeniable part of the American cultural landscape. Sure, everyone may not enjoy the virtues of a half-sour pickle, but nearly everyone knows or has experienced a classic deli. There are a lot of big names in the world of Delis, Katz, Carnegie, Schwartz and many others, and with a big name and a successful product, there are bound to be imitators. In , one of those deli imitators is named Katz’s Deli. In my mind, that’s a tough name to live up to; unfortunately, the Houston Katz misses the mark.

Once I was inside Katz’s, I was surprised at how muted the interior was. Based on my previous deli experiences at Kenny & Ziggy’s, I was expecting a myriad of kitsch to be plastered over the walls. A second thing missing from the scene was a bowl of half-sour pickles at the table. However they were soon offered up. 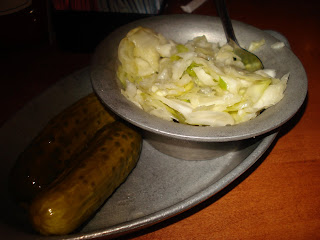 It was a pretty dark deli and getting a good picture proved more than challenging. 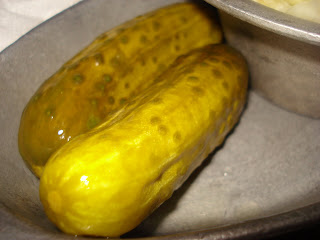 The pickle was not worth the wait. It was your standard half-sour, no pronounced garlic or pepper flavor, nothing unique at all.

Just as with dim sum, there are a few dishes that a deli has to do well if they’ll pass muster. One of those is a basic pastrami sandwich. 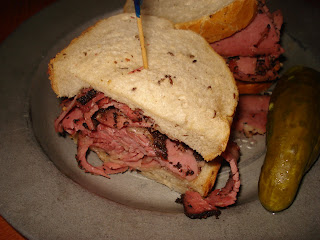 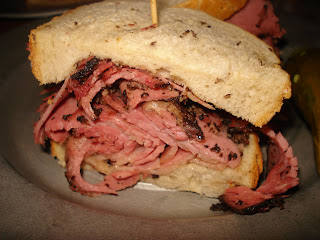 I’ll believe Katz’s when they say it’s a half pound sandwich. 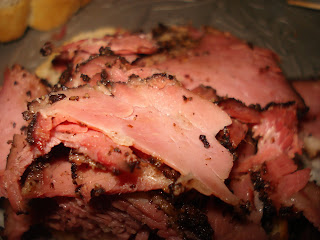 Unfortunately, it’s a half pound of mediocre pastrami. Each bite is peppery but more than a little dry. There’s also no smoke flavor at all. I was told by my waiter that this was a house made pastrami, if so this is a cold, boring and simply bad sandwich. Yes it’s a manageable size, but when you get a cold pastrami sandwich, it’s just annoying.

When I saw a section of menu titled homemade soup, I crossed my fingers in hopes of matzo ball. It was there and it was an award winning soup. Whose award, I have no idea, but how does it taste? Well my waiter actually forgot the soup, but that’s completely understandable. He was more than quick to correct his mistake. 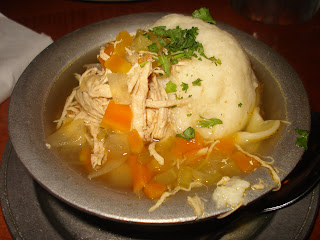 Looking at the bowl, the size of the matzo ball is ridiculous compared to the bowl. Aside from the size, the chicken was dry as a bone and the broth, while having a distinct canned taste, was pretty good.

Another favorite to investigate is the latkes or potato pancakes. 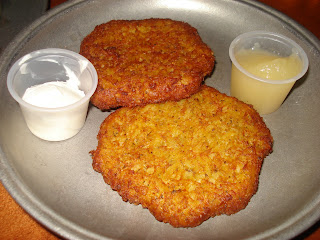 Right off the bat, these were pretty good latkes. They had a little peppery taste, but they would be miles better if the grease had drained off. All in all these were a solid performer for what looks to be a glorified hash brown.

Lastly is the deli favorite: the reuben. Maybe it’s just me, but when I think of a reuben, it’s a simple combination. There’s rye bread, corned beef, sauerkraut, Swiss cheese, and Russian dressing. Katz’s goes above and beyond the regular Reuben to offer a choice of pastrami, corned beef, turkey pastrami, or turkey breast. I think they left the reuben behind a long time ago. 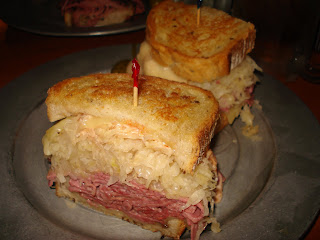 Judging from the quantities, they didn’t leave out any sauerkraut. 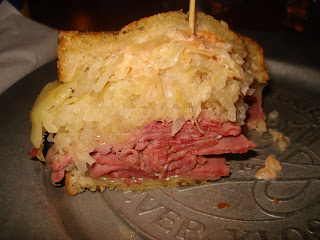 I know there’s a lot of meat on the sandwich, but there’s a ridiculous amount of sauerkraut. Actually for $10, it might be a stingy amount of corned beef. 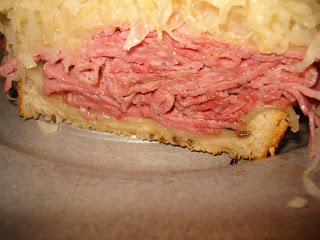 Once you get past the subpar rye, you’ll find there’s no flavor to this sandwich, well none outside of sauerkraut. Like the flavor of the corned beef, the Russian dressing is missing as well.

There are a few things to like about Katz’s Deli. I had a very accommodating, attentive waiter. There’s a large menu with a fair amount of variety, and it’s hard to beat getting a sandwich 24 hours a day. However, for a rarely as I visit , I’ll spend my deli money at Kenny & Ziggy’s. There I know I can get a proper reuben.

how pretty and delicious looks this amazing plate, I think with this plate I am going to be very complete and with a need to eat it again. Buy Viagra Viagra