It’s a beautiful Monday afternoon in . My buddy Frank from college is driving down from and we’re going on the hunt for soup dumplings. Well, it’s not really much of a hunt as Frank, on a tip from the chef at Catalan, knew the perfect place, Fu Fu Café on .

Nestled in the middle of a sprawling strip mall, it would very easy to miss Fu Fu Café. However once inside, there’s a good number of people inside with us two Caucasians making up the extreme minority. Well, my mother always said you knew it was a good Chinese restaurant when there aren’t any white people. Ethnicity counting aside, at just a glance there was enough on the Fu Fu menu to keep me occupied for days.

At first I was worried. I couldn’t find soup dumplings anywhere on the menu. I couldn’t remember the anglicized version of the Chinese characters and I can’t read Chinese to save my life. Thankfully the waitress was more than helpful, telling us to order the steam pork bun. As ambitious and hungry as we were, we decided that we needed two orders. 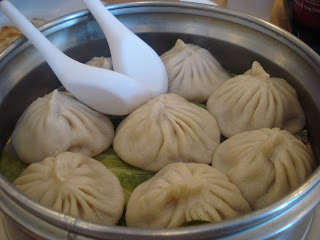 There they are, not as small as I was expecting. 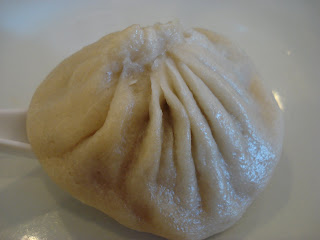 I took one out of the steamer tray and found it to be made of a very thick dough. These are much different than the last soup dumplings I had at Chef Liu in . I didn’t lose all the soup picking up the dumplings. Inside there was plenty of that delicious broth, although I think it was made with agar not pork fat. Nevertheless, there was ample broth, lots of well seasoned pork and a thick dumpling skin. They may have been cumbersome and more than a mouthful, but they were worth the trip.

Of course, what’s the fun of going to an exceptional Chinese restaurant and only ordering one dish. Looking to change from cuisine to , I ordered the Ma Po Tofu. 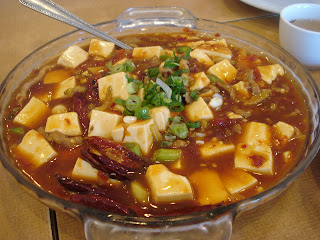 It’s rare that I get to enjoy a version of this dish that I didn’t make. There was plenty of residual heat to this dish, but not a lot of that “ma la” effect of the peppercorns. There also wasn’t a lot of pork in the dish, but what was there was very tasty. I was surprised at the slight vinegar taste, but I figure there are countless variations on the classic dish and this one was quite good.

Looking to another dish, we tried the Boiled Beef with Spicy Sauce. 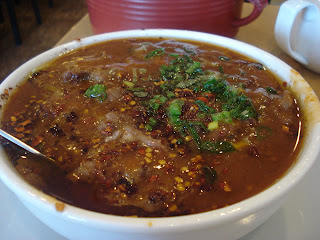 Well, it looks as oily as the version I made. The beef was very tender and completely coated in oil, but that’s to be expected. Most of what I’ve read about this dish tells you to fish out the pieces of beef and leave the oil behind. Even so, the “ma la” still wasn’t like I was expecting. This was a very good dish, but I wouldn’t order it again, simply because of the variety of other dishes available.

The last dish we ordered was Frank’s choice, the Peking Style spare ribs. 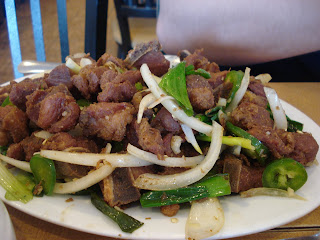 Essentially a small mountain of pork ribs, scallions, jalapenos, and onions, how could this be a bad thing? Well, it wasn’t. Outside of the soup dumplings, this was the favorite dish of the meal. We honestly couldn’t stop picking and eating the ribs. With a crispy, heavily seasoned, salt coated exterior, and a tender, mildly spicy interior, how could we stop?

The results were quite telling. The spare ribs were gone, reduce to a plate of onion and pepper remnants. There wasn’t a soup dumpling to be seen. There was plenty of Ma Po Tofu and Boiled Beef left, but that’s not a sign of a poor dish on their part. The other two were just that good, besides we needed to save a little room for dinner at Feast that night. Regardless, Fu Fu Café with it’s intimate setting, helpful staff and voluminous menu is on my list of definite meals the next time I’m in .