Feast has been on my list of places to try for about a year now. However the last time I was in Houston was with family and some family members aren’t too enthused about the idea of “nose to tail eating”. Well, this time was different. I had an equally food obsessed friend, Frank, joining me for dinner and I was going to see if Feast could live up to the hype.

When I say hype, there’s plenty of it. You need only look at Feast’s website to see some of the glowing one-liners they have received. Lines like “no real peer in New York, Chicago, Los Angeles and other major cities that pride themselves on their epicurean adventurousness" from Bruni at the New York Times, and a slew of “Best Restaurant” awards from various Houston media outlets.

There’s no parking at Feast, but after a quick interaction with the valet, you walk into a relatively small and rustic building. There are a few pieces of art on the wall, a boombox on a table and a dozen or so tables. After being seated, there was no question we would order the 9 course tasting menu. From there, it was only a matter of seeing what arrived from the kitchen.

While Frank and I were debating what sort of bread was on the table, the first of our 9 courses arrived at the table. 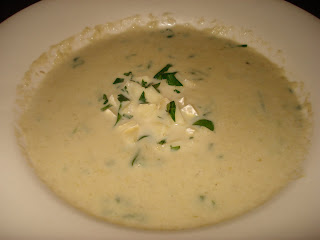 The waiter settled our debate; it was sourdough not soda bread. The soup was something completely different, a cardoon and spinach soup with brie. It turned out to be a relatively mild soup with a very subtle spinach flavor. A nice touch was the small chunks of brie, each one giving a salty punch to a spoonful of soup. Before the bowls were empty, we decided this tasted a lot like creamed spinach soup. The waiter filled in the rest of the blanks when he told us that cardoon has a flavor between eggplant and asparagus.

The second dish was something more along the lines of what I was expecting. 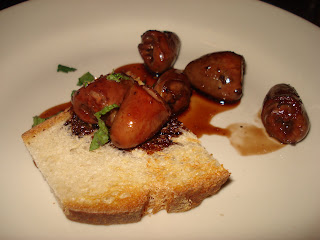 Seared guinea fowl hearts on toast with a red wine reduction, it’s a headfirst jump into the offal part of the meal. I find hearts fascinating if only because people don’t realize how many hearts they’ve already eaten. If you’ve ever had a burger than came in a frozen bulk container from a big box store, there’s a good chance you’ve had some beef hearts. However, this is about guinea fowl hearts and they had a very interesting meaty texture, almost like a mushroom at first. 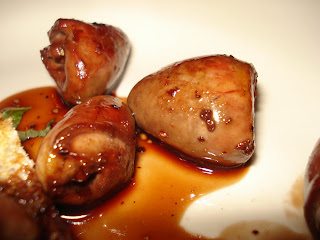 It was a little odd biting into the heart and noticing the different chambers, but it was quickly forgotten as the slight iron taste was well complimented by the heavily reduced, rich red wine sauce. The mint was an especially nice touch to the flavor, but I was very impressed with the trailing taste of peppercorns in the glaze.

I know I’m not alone when I say that pork belly occupies a special place in my idea of good foods. Yes bacon does immediately spring to mind, but maybe we should forget bacon for a moment and consider the greatness of corned pork belly. 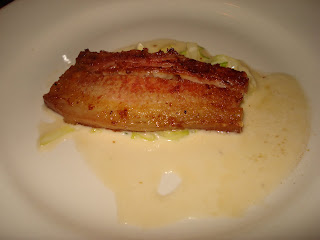 Served as a special for the night, the corned pork belly with creamed cabbage and caraway was my runaway favorite. To begin the belly was incredibly tender, but what was surprising was how well it was complimented by the cabbage. 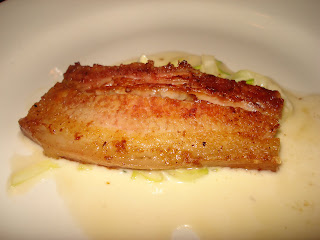 This was cabbage I could enjoy on a regular basis. Sweet and toothsome, it was a perfect combination to the saltiness of the belly. I had no idea how the evening could get any better, and I was tempted to get another order before dessert, but when it was erased from the specials board, my dreams were dashed.

A chicken onion, I wasn’t sure what to expect from that description. I certainly wasn’t expecting this combination of brown and green. 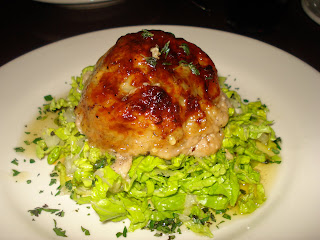 Essentially a red onion that has been covered in chicken skin and baked, this dish seemed like an odd idea but one that could work. 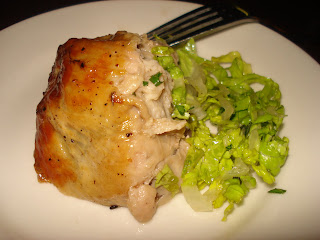 One immediate downside was the lack of crispiness of the chicken skin, but I don’t see how it could be crisp when it’s covering a red onion. The skin was very well seasoned with just salt, pepper, and few unknown herbs, but on the whole it seemed undercooked. Inside the onion was cooked but not caramelized. There were a number of things indicating this was a well thought-out dish. Eating all the onion and chicken skin, your tongue is completely coated in fat. Fortunately, the lettuce underneath the onion has a light vinaigrette that cuts through it all. 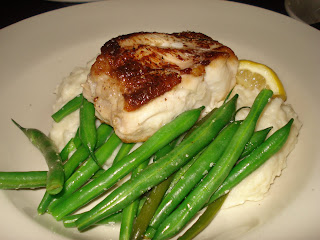 Starting with the mashed potatoes, they were something special. Even though they were mixed with cream and butter, they weren’t too rich and they retained a nice lumpiness. The green beans were a different story with all but the smallest ones being undercooked. What about the grouper? Well, some parts were a little overcooked, but it was remarkable that the grouper didn’t completely melt into the mashed potatoes. Aside from that, this was a marvelous piece of fish.

Thus far, chicken, fish, pork, and guinea fowl are the meats that have been brought to the table. The next dish would add lamb to the growing list in the form of lamb and turnip pie with cauliflower cheese. 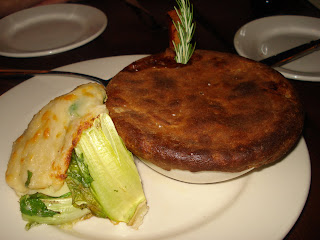 At first you would think the crust is burnt, but that’s a suet crust that’s just as dark and rich as it looks. Even better, the crust was completely packed with black pepper. 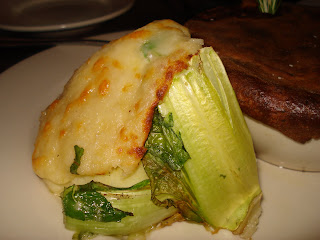 Our waiter mistakenly labeled this as broccoli, but either way I love the cheese topping, the cauliflower was neither here nor there. 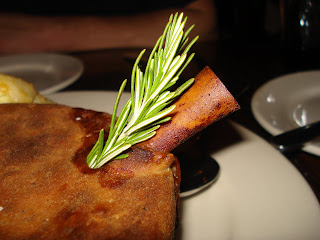 I do love the shank bone sticking out of the pot. At first I thought it was a handle. 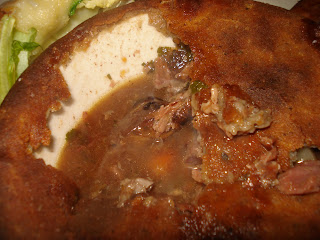 Inside is a rather thin stew, but it has quite a pronounced lamb flavor. 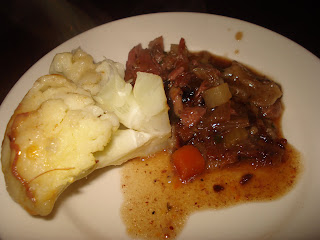 Being an oddly cold February night for Houston, this lamb pie was perfect. The lamb was excellently cooked, but it was best when eaten with a piece of crust. The overt pepperiness of the crust was just what the lamb needed. However, I wasn’t too sure about the turnips. To me they didn’t stand out and could just as easily been replaced by potatoes.

Moving on to the last of our entrees, we were brought a smoked mackerel topped with a fried egg and served over spinach and crushed potatoes with horseradish. 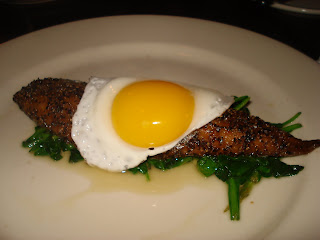 I wish my fried eggs looked that good. 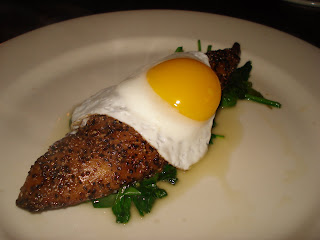 Frank made a great observation by saying a perfectly fried egg looks pregnant, and the egg here certainly does. 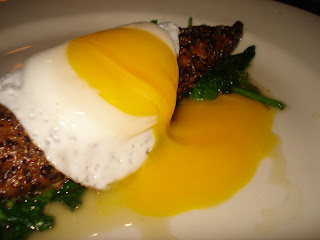 Aside from the egg, this fish left me wondering. There was a nice bite of peppercorn with each bite, but it was almost overpoweringly salty. It immediately reminded me of pastrami. All the elements were there, the salt from the curing, the smokiness and the full covering of pepper. However the chef said it wasn’t brined or cured, it was just salty. Well, you can’t guess everything correctly. Even without the pastrami effect, you really needed the spinach and egg to cut through some of the saltiness of the fish, but even that wasn’t enough.

Our desserts should have started next, but I insisted we try the pork rillons. 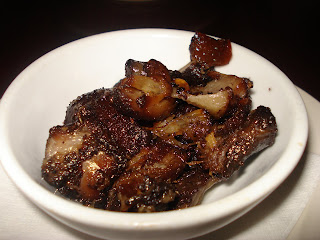 Served as an extra, this is a pork shoulder that has gone though a lot of work. Each piece is fatty, crunchy and caramelized. Sure some pieces are a little dry, but there’s plenty of fat to balance that out. What was really interesting about this dish was the combination of spices. Frank called it a traditional flavor profile; with pepper, clove, cinnamon, and nutmeg, it reminded me of a gingerbread cookie.

The first of our desserts was a lemon sorbet, the perfect thing to cut through the strong, fatty flavors of the rillon. However, once the fat was gone, there was entirely too much syrup in the sorbet. I have a feeling this is my fault. They probably had the sorbet ready when I ordered the rillon. Plans changed, the rillon was brought out, the sorbet melted a little, syrup escaped. Even more unfortunate, a sorbet in a white bowl with a flash just doesn’t work

Never mind the sorbet, the final dish is the real dessert for the meal. 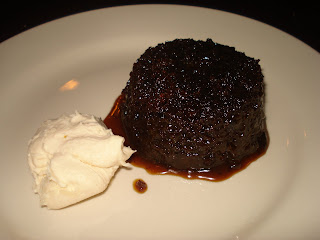 The name stick toffee with clotted cream just sounds decadent, and it was. 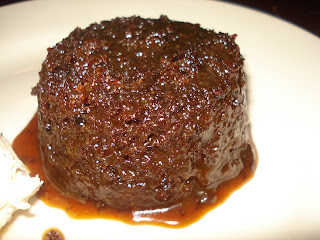 The toffee was blisteringly hot, but rich, sweet, and frankly amazing. 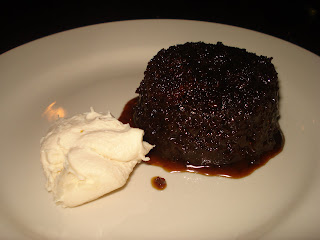 Even better, the clotted cream was just as rich, but thick like it had been in the freezer. The two combined made some something fantastic.

As delightful as everything was at Feast, the real treat was just how reasonable the prices are. Surely you would think a 10 course tasting meal for two, with wine, and cocktails, and tshirts would be something astronomical. Well considering the quantity and quality, it was an absolute steal for $200. If we had just gone for water and the 9 courses, we would have skated by with a hair over $50 a piece.

There are a few restaurants I go to every single time I make it to Houston. One of those is Fung’s Kitchen, which I consider some of the best dim sum in this part of country. After the staggering meal, inspiring motto and extremely helpful and patient wait staff, I think Feast has made it to that list.

Should you happen to want more, cardoons are available at Fresh Market and in my front yard. They're actually quite pretty.