The Saints had done it. The Lombardi trophy was in New Orleans and I was on my way to see the Lombardi Gras parade. However, planning for good parade viewing spots could wait, I needed a good spot for lunch. While navigating I-55, I scrolled through opentable to see if anything caught my eye. Wouldn’t you know John Besh came to the rescue, this time in the form of his new restaurant Domenica. Actually Blackened Out was quick to point out that Domenica is really Alon Shaya’s restaurant, but I’m always interested to see any restaurant that Besh has his hand in.

After checking into the hotel and a quick walk down Canal, I made it to Domenica, albeit through the wrong door. Inside Domenica is a nice, but rather unmemorable interior. What really stuck out to me was that nearly every item on the menu was able as both a small and a large plate.

Before deciding on which small plates I wanted to try, I focused on the salumi section of the menu. Labeled as both imported and house cured meats, I was interested to see what was cured in house. After a short conversation with the waitress, I had an order of three cured meats on the table. 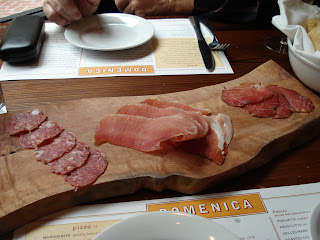 Working from left to right, there is salami gentile, speck, and coppa. I was excited, the last time I had charcuterie at a Besh restaurant was at Lüke and it was a showstopper.

First I went for the salami gentile. 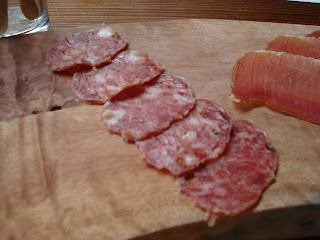 This really had a rough and seemingly rustic texture. Each bite was fatty and quite frankly, delicious.

Second was the speck or smoked and cured pork leg. 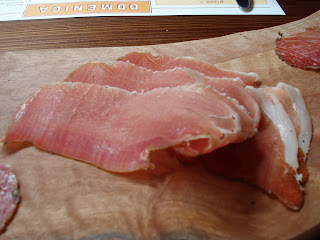 You can tell by the chunks of fat this should be a creamy meat and it did not disappoint. However, what really stood out was the pleasant smokiness of the meat, apple wood smoke as I later found out.

Last of the trio was the coppa or cured pork shoulder on the menu. Oddly, the waitress said it came from the neck. 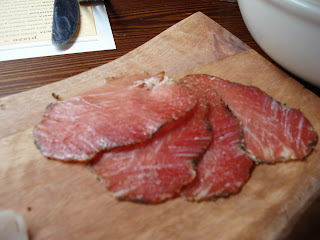 I was incredibly surprised to taste a pungent, almost ammonia like taste to this meat, but I soon found a remedy. 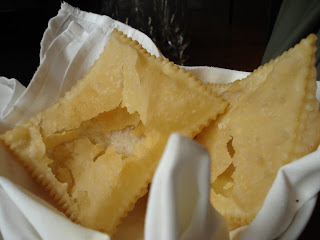 The torto fino that was served with the salumi eliminated any of the ammonia taste and was the perfect companion to the meat. I really was infatuated with the bread, it light, tender and almost like a savory beignet.

Moving past the salumi, I started studying the menu to see what I wanted to try from the selection of antipasti and primi sections of the menu. The first small plate I decided on was the fried eggplant bocconcini. 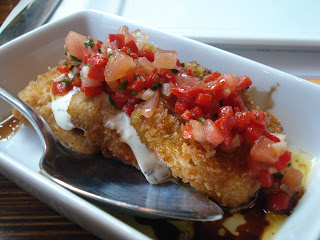 Dressed with goat cheese & aged balsamic vinegar, the eggplant really was nonexistent in the flavors of this dish. That being said, it was a great vehicle for the other flavors, especially the goat cheese.

Second on the table was the stracci or torn pasta with an oxtail ragu and fried chicken livers. 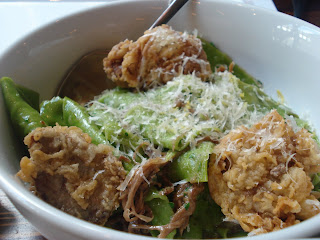 I’ll go ahead and say this was far and away my favorite dish. The pasta was thin and perfectly cooked while the oxtail ragu was rich and beefy. One thing I was confused about was the chicken livers. Yes they were crunchy, doughy and a nice contrast to the bold beef flavors of the dish, but I really didn’t see their purpose. I think I would actually prefer to leave out the chicken livers and add more ragu, but this combination still works well.

Next was tagliatelle with a rabbit ragu and porcini mushrooms. 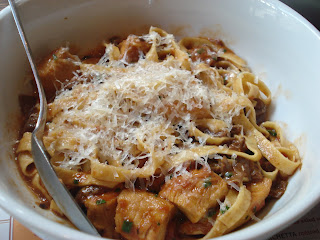 Last in the quartet of dishes was the cavatelli with fennel sausage, beans and Tuscan kale. 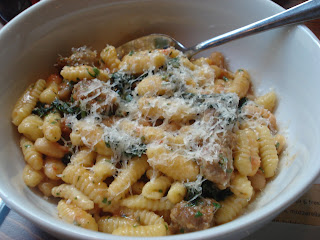 One thing I loved about this dish was the sausage, I only wish there was more of it in this bowl. Not just because I loved the taste, but it played a great foil to the dense beans and pasta, which happened to taste and feel the same: dense and doughy. I asked the waitress if they served us gnocchi by mistake, but I was informed the cavatelli was just a very dense type of pasta.

In the end, I had a very rare picture for a Besh restaurant. 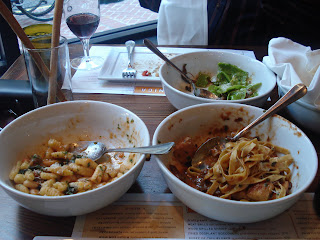 The service at Domenica really was excellent. I couldn’t ask for a more helpful and attentive waitstaff, but I was just underwhelmed with the food at Domenica. There were a lot of great flavors, but there seemed to be a few problems with the final products. Does this mean I’m writing off Domenica? Not at all, I’ll give this a second shot even if just for my Besh fandom.

We tried Domenica this weekend, and like you and Gidget, were just underwhelmed. I told my husband that if someone wanted to go there, I would go, but I would never pick it on my own.

Now Luke, on the other hand, was delicious.