After a little thought to Irish dishes, the idea of shepherd’s pie popped into my mind. Shepherd’s pie may be more English than Irish, but it’s a good idea and I could use some of the Flying M Farm lamb I had in the freezer. With the meat taken care of, there’s no better place for inspiration than Hugh Fearnley-Whittingstall and his masterpiece, “The River Cottage Meat Book”.

Hugh Fearnley-Whittingstall’s recipe for Shepherd’s Pie is easy enough, it even includes ketchup and Worcestershire sauce, but there was one catch. The first ingredient is 1 lb of leftover roast lamb. Not having any leftover lamb, I decided to cook up a few fresh roasts. That means turning to an earlier entry for Roast Lamb. 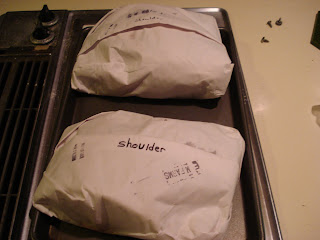 Having had mixed results with these lamb shoulders, I elected to use 2. 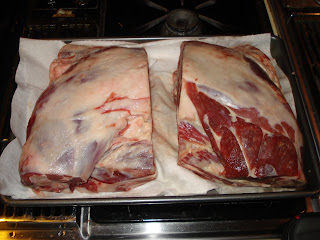 Defrosted, washed and looking quite lamby, it’s time for the fun part. FW’s recipe is a pretty simple one, but with a relatively unique ingredient: anchovies. The basic idea is to cut garlic cloves into thick slices, break a few sprigs of rosemary into short lengths and then cut 4 or 5 anchovy filets into 3 or 4 pieces. 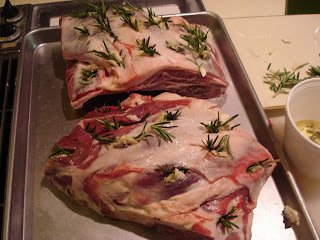 A dozen or so slits are made in the roast and this odd trio is stuffed into the slits. 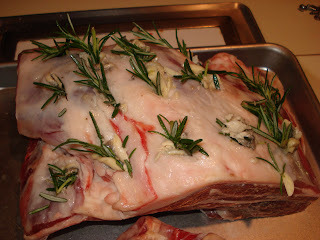 It really does make for an odd looking roast. FW reassures the reader that the anchovies won’t make the meat fishy, but I still have my doubts.

The roasts get a good covering of olive oil. 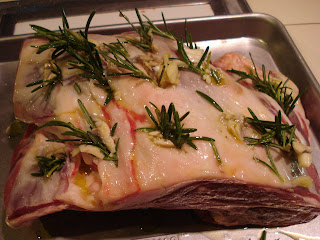 They’re then put into a very hot, 450 degree oven for what FW calls the “half-hour sizzle” 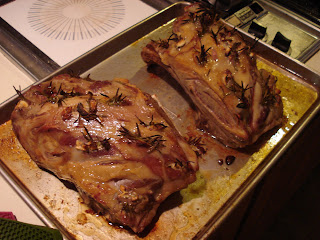 Half an hour certainly made an impression on the roasts. At this point, the oven is lowered to 325, a glass of white wine is poured over the roasts, and the lambs are returned to roast to your preferred temperature.

I was shooting for a lovely medium-rare at 140 degrees. I set up a remote probe thermometer for 140 and my timer for an hour. 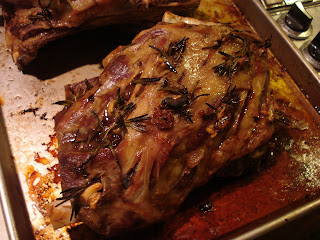 Almost an hour later, the roasts came out beautiful.

20 minutes of resting went by before I attacked the roasts, but I soon had plenty of lamb to make the shepherd’s pie. Since I had time until dinner, I decided to take FW’s advice and use the lamb bones to make a quick stock. 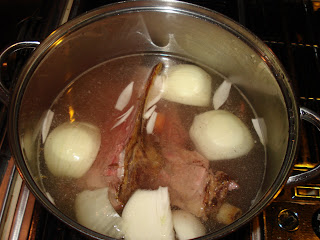 The lamb shoulder was put in a stock pot, covered with water, an onion and carrot were added to the pot, everything was then simmered for 2 hours. Whittingstall even goes as far as to strain the stock after 2 hours and reduce the stock 1 cup of very condensed liquid. That’s all well and good, but I had company coming and I wasn’t interested in spending 3 to 4 hours reducing stock for Shepherd’s Pie.

With the 1lb of lamb chopped into pea sized pieces, I could get the rest ready. 2 onions were chopped, 2 carrots finely diced, and 1 garlic clove chopped. 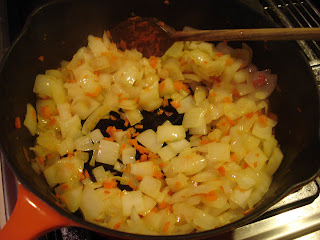 A large pan was put over medium-low heat and the onions, carrots, and garlic were sweated until the onion just went soft.

At some point, Kate & Alvin showed up for dinner and Kate decided she should man the camera. 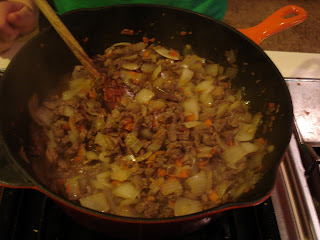 Here the pound of lamb has been added to the pan and browned. 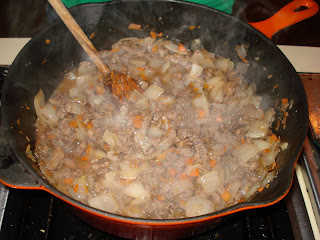 Whittingstall isn’t specific about how much stock should be used, but I suppose a cup of the lamb stock was added to the pan. ½ glass of red wine, 1 tbs of ketchup and 2 tsps of Worcestershire sauce were also added. 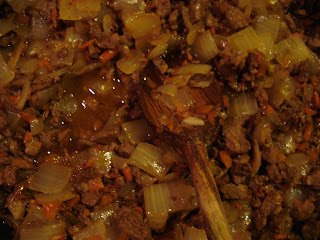 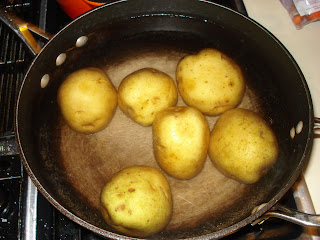 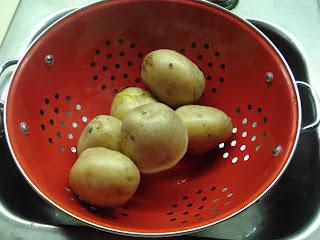 When that tender stage was reached, the potatoes were dumped into a colander and left to steam and cool for a few minutes. 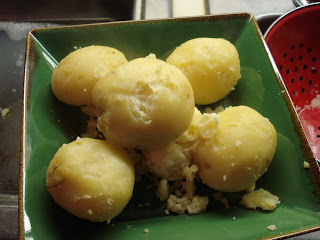 Abandoning all heat sensitivity, I peeled the still hot potatoes. 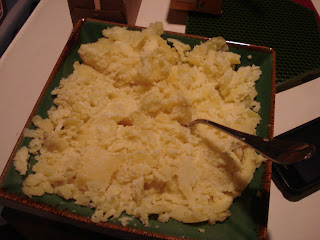 They were then mashed with a fork and left to steam for a few minutes more. Now it was time for the incredibly tedious part. After heating up 1 cup of whole milk and ½ cup of butter in a pan, it was time to attack the potatoes. 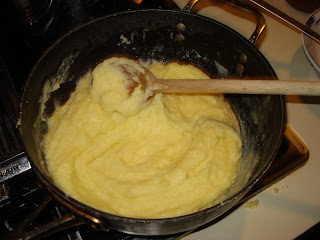 This is the result of pushing 2 lbs of potatoes through a sieve into a pot of hot milk and butter. It’s delicious but incredibly annoying. I think I’m asking for a potato ricer for my birthday.

Potatoes ready, it was time to assemble the pie. 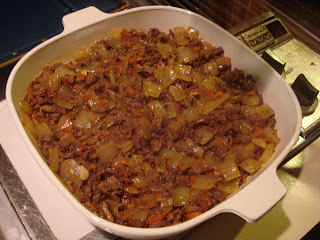 After adjusting the seasonings one last time, I added the filling to the baking dish. 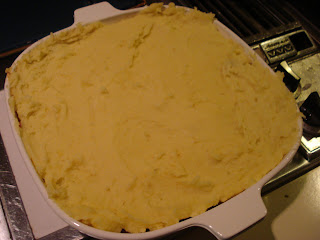 Whittingstall writes it will take 4-5 cups of mash to cover the pie. Apparently 2 lbs of potatoes is the perfect amount. The whole pan then goes into a waiting 400 degree oven. 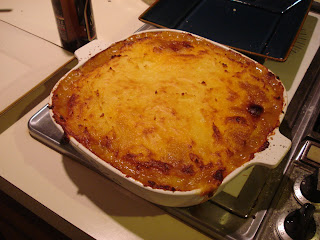 The time depends on whether the pie is warmed or chilled, but I baked mine for 30 minutes and it came out beautifully. 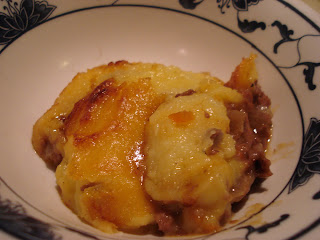 Taking a sample into a bowl, I was extremely pleased with the results of my hard work. 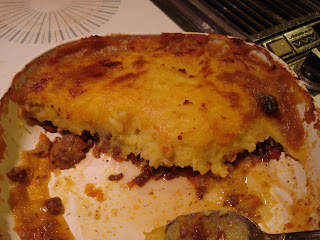 Judging by how much pie was eaten, I say it was a success. When I started this project, I was looking forward to a calm evening with a little cooking and no drunken idiots pretending to be Irish. Seeing as how much work went into this simple dish, I think I’ll join the drunks next year.