Last week, I posted my experience with Bee Yinn Low’s recipe for Sichuan crawfish from her site Rasa Malaysia. As I wrote in that post, the reason I tried Low’s recipe was because of a certain ingredient. For some reason, in his book Momofuku, nearly every one of David Chang’s recipes calls for usukuchi soy sauce. Well, I never turn down an reason to buy more random pantry ingredients, but this one turned out to be a little difficult to find.

After checking both the local Chinese and Japanese groceries and a number of websites, I eventually found a bottle of Yamasa usukuchi soy sauce on Efood Depot.

So, after finally receiving a shipment of the elusive soy sauce, I’m ready to take a crack at David Chang’s recipe for Sichuan Crawfish.

Here’s what I was looking for. 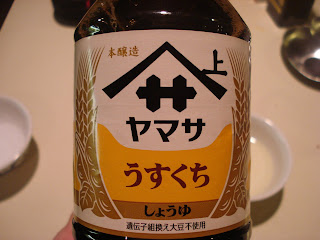 Yep, if I saw this in a grocery store, I would have no idea what I’m looking at. 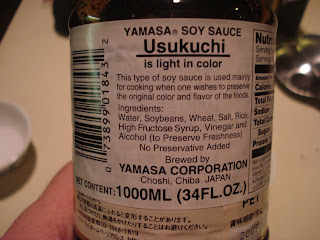 Luckily there’s an English label slapped on the back. So this is used to preserve the color and flavor of foods? Odd since the Wikipedia page states that “it is both saltier and lighter in color than koikuchi.” Koikuchi being the average Japanese soy sauce, just an fyi. I wouldn’t think that preserving flavor and saltier work together but I digress.

Like last time the crawfish were purged, but now we’re working with 4 pounds instead of Low’s recommended 2. 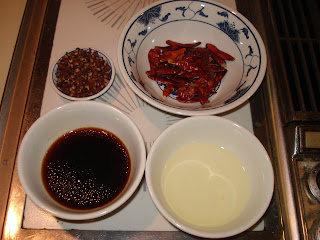 Here are the rest of the ingredients: 2 tbs Sichuan peppercorn, 30 dried chile peppers, ¼ cup usukuchi soy sauce and ¼ cup neutral oil. With double the peppercorn and chilies, I’m hoping these crawfish will pack the punch that I’m looking for.

I can’t forget the star of the show. 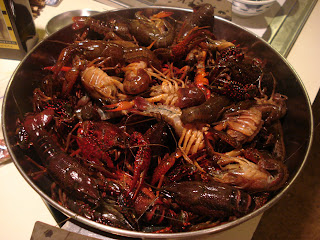 4 pounds of purged and rinsed crawfish are ready to meet their chili laden fate.

I put a wok over high heat and added the ¼ cup oil. 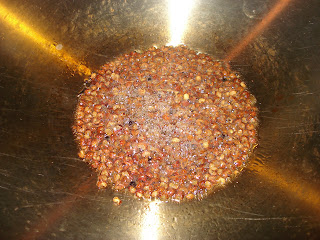 With the oil hot, I added the peppercorns 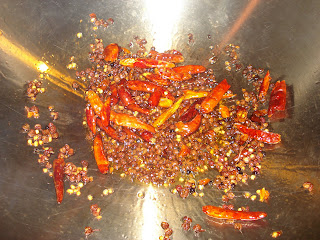 And then the chilies. Per Chang’s instructions, I crushed the chilies as I threw them in the wok.

It was just a few seconds until the oil was aromatic. 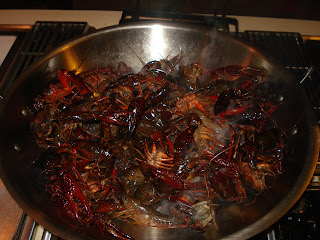 So in went the crawfish. I immediately realized I should have used two woks, but I soldiered on. 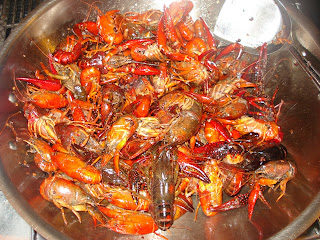 I began stirring the whole batch until they started to turn a bright red. 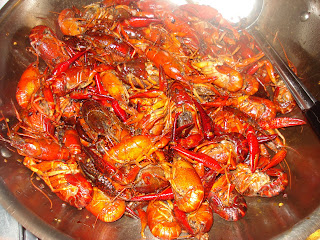 After 5 or so minutes, every crawfish was a brilliant shade, so I added the ¼ cup of the soy sauce and then turned them out into a bowl. 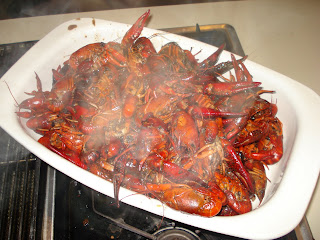 They look pretty good with the flash. 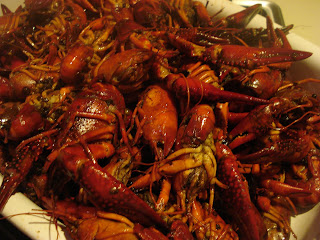 So what do they taste like? Well I didn’t get that fiery punch that I was looking for and I’m not sure what was so special about the usukuchi soy sauce. Looking back over the recipe, Chang says to use 2 pans, but are you supposed to use 1 set of the ingredients per pan or divided the amounts equally? With plenty of crawfish season left, I’m sure I’ll have time to figure out which method I’m supposed to use and hopefully find that burning spice that I’m looking for.

It’s now March, and I finally got around to taking another crack at David Chang’s recipe for Sichuan Crawfish. After some deliberation, I decided to go with the idea of one set of ingredients per pan. That means 4 tbs of Sichuan peppercorns, 60 dried chilies, ½ cup of usukuchi soy sauce and ½ cup of a neutral oil.

First came another 4 pounds of crawfish from the Crawfish Hut. 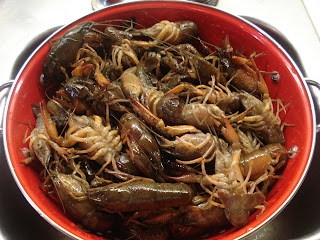 Next my two big woks were heated to near melting point on my stove and after adding the peppercorns and chilies, in went the crawfish. 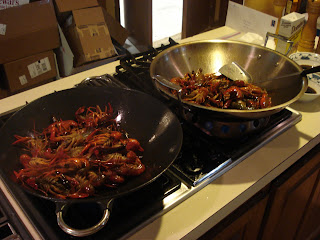 It was interesting trying to manage two woks at once, but in a little more than 4 minutes, the crawfish were ready. 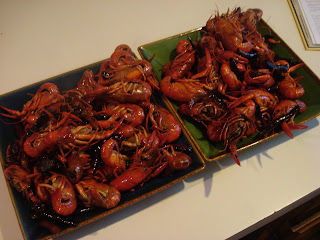 You can tell there are a lot of chilies in this dish. 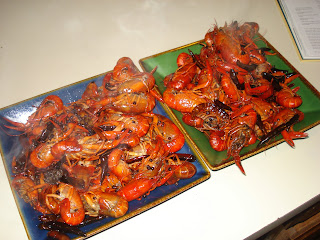 Number of chilies aside, how did it turn out? 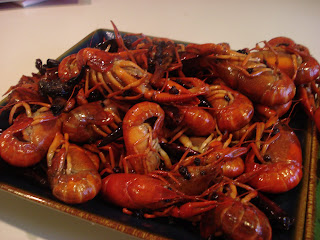 There still isn’t the variety of flavors like with Rasa Malaysia’s recipe, but you can definitely feel the effects of the Sichuan peppercorns. It’s actually a little odd to taste crawfish with so few seasonings on them, it really gives you an appreciation for the taste of the tail meat. I think the bottom line is that I’m still not entirely satisfied with either method, but I wholeheartedly support the idea of 2 pans and double the ingredients with the Chang recipe.

Shit, this upsets me, I am a proud owner of Momofuku and I have yet to cook anything out of it. I was actually looking at this recipe to try first but I had the same problem with the soy sauce. I think I'll try the pork buns first. Any tips on pork buns?

Yea, trying to find that special soy sauce was a real pain.

Since you mentioned the pork buns, I went and looked at the recipe again. It's not what I think of when I want pork buns, but they don't seem hard to make. It just seems a little tedious making 50 buns. Maybe I'll give it a crack this weekend.

Let me know next time you're hunting random soy sauces and I'll use it as an excuse to head to Buford Highway or Super H Mart - went today and they had a nice selection (and the futile search for Oyster vs. Oyster flavored sauce)

mmm...make some things you can freeze and I can try when I come home!

I know this is a little late but I found the best spicy chinese crawfish recipe ever. Its not sichuan Mala but Hunan style. I found wok frying crawfish does not allow them to absorb the flavour as much as boiling them. The recipe I found is from a chinese site and I used google translate in the link. For the chillies I used 1/2 fresh thai bird chillies chopped and 1/2 dried "facing heaven chillies" It turned out exactly like the crawfish you eat on the street all over China. I also think they use the same liquid to cook several batches of crawfish so the flavour of the broth is more and more intensified. We liked the broth so much after we were done with the crawfish we threw in some boiled efu noodles in it.

Here is the recipe:

As I understand it, the usukuchi vs. koikuchi thing is just the Japanese terminology for what in the Chinese soy sauce world would be the difference between "light" and "dark" soy sauce. I don't know the characters, but the Chinese is "shen" (fresh/light) vs "lao" (old/dark). And in the Chinese soy world, it's the same flavorwise: the lighter stuff is saltier, but doesn't alter the color of the dish, whereas the dark stuff makes the dish darker, but isn't as strong a flavor.

So, basically, it's just confusing things to use the Japanese terms. Use light soy (not "lite" or low-sodium) for usukuchi, and dark for koikuchi. And maybe throw an old, dried-out piece of prosciutto or cured ham in with the chilis and peppercorns to get a bit more flavor.