For as much bbq as there is in Jackson, I rarely partake. That doesn’t mean that I hate bbq, quite the opposite. I simply rarely feel the need to indulge in any of the okay to pretty good bbq that Jackson has to offer. That being said, when I really want bbq, I’m always looking for something new and different in town. Isn’t it convenient that there’s a new bbq place called BBQ Fever.

Tucked inside a strip mall, BBQ Fever immediately seems a bit odd. Maybe it’s just me, but when I think of southern bbq, I think of dilapidated wooden shacks, a constant stream of smoke from the back, and a gravel parking lot. However, that’s just a stereotype as Rendezvous in Memphis only has the stream of smoke.

Back on point, BBQ Fever is quite nice inside. It still has that sense of newness about it. I’m not sure what was here previously, but it has the feeling of an old buffet restaurant. Sure enough, there is a buffet in the back, and after a quick look, I elected to pass.

With menus on the table, I immediately zeroed in on the jalapeno ribs. Pork, smoke, peppers, it seems like a match made in heaven. After a visit from the waitress, I had those ribs and a few other things on order. Being one of three patrons at 1 in the afternoon, it was no time at before I had my food. 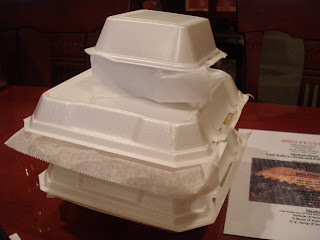 I’m still not exactly sure why everything was served in to go boxes. There were an ample number of plates for the buffet, but none for me. I suppose it would make the inevitable leftovers easy to take home.

It seemed like a good day to try something out of the ordinary for me, so the first thing I sampled was the catfish sandwich. 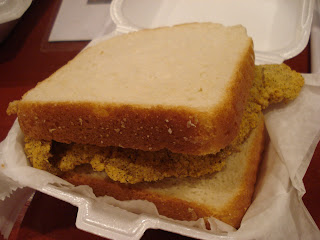 With only 2 huge slices of bread and a cornmeal fried catfish fillet, you can’t ask for a much more basic catfish sandwich. 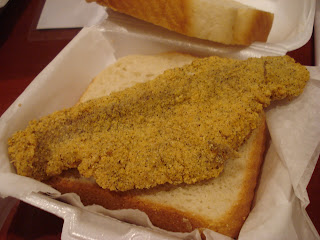 I tried eating a few bites with the bread, but it ruined the catfish. So ditching the white bread, I found this to be a juicy, well fried piece of fish with a great balance of salt & pepper. The catfish really was topnotch, but with fillets that size, I have a hard time imagining someone finishing an entire 5 piece dinner.

Moving on to the raison d’être of BBQ Fever, the jalapeno ribs were the first box I opened. 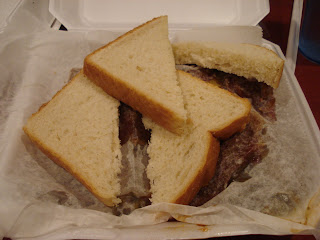 I suppose those big pieces of white bread follow the bbq tradition, but I generally find them useless. 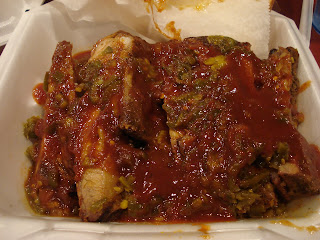 These may look like any other ribs covered in bbq sauce, but if you look closer 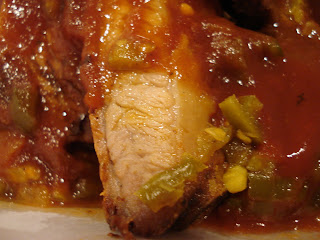 You can see those chunks of jalapeno, and the disturbing lack of any smoke ring. Taking a bite, there’s no real smoke flavor, just the basic but somewhat comforting taste of charcoal. The ribs are actually quite tender, but not overcooked. It takes a little work to pull the meat from the bone, but the real star is the sauce. It’s sweet, spicy, a little vinegary, but not overpowering, just a quality sauce with a good lingering heat.

As if jalapeno ribs weren’t enough, I had also ordered half a slab of the regular bbq ribs or Chef Kelly’s twist and pull ribs. 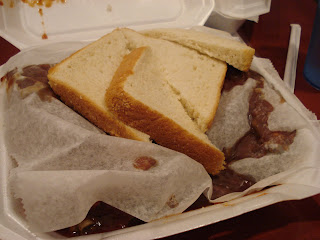 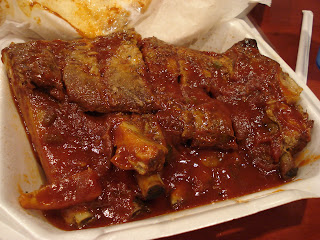 Again, there’s no skimping on the sauce, or the amount of ribs. There’s a full, meaty 6 ribs to this half slab order. 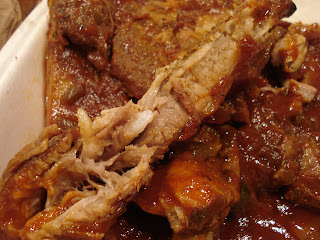 There’s still no smoke to speak of, but there’s a quality smoke taste; I later found out that the ribs are smoked with hickory. The original sauce is a little disappointing. I enjoyed the flavor of chili sauce but found it quite greasy.

One thing I really enjoy is the simplicity of the sauce choice. Instead of giving the customer dry meat and a variety of mediocre sauces, BBQ Fever has the stones to stick with a choice of two sauces and it’s applied for the customer. That being said, I came away with mixed feeling from BBQ Fever. It really does seem to try and offer a little too much variety on their menu. You have the standard bbq fare like chicken, ribs, brisket and pork chops, the choice of fried everything, and a variety of roasted options, all of which seem to dilute the intentions behind the name. I suppose I’ll have to keep looking for my go to bbq in Jackson.