After several days of abnormal, subfreezing weather, the water pipes in were fed up. Water was unsafe to drink, to wash dishes, or most importantly prepare food. So while I was safe and happy with my water in my home, trying to find lunch in became a real chore. Of course, one those water crisis days, I felt the need for a big, messy gyro. Naturally I headed straight to wraps.

Once I got to the door, I saw a sign saying that Wraps now serves beef burgers. Even if it’s just your standard American Kobe beef, it’s still worth a shot. Unfortunately, the staff at Wraps told me they were closed for lack of clean water. Dejected, I made my way back downtown and sat out that lunch.

Fast forwarding to last week, I knew restaurants were back in business and I had beef on the brain. A quick drive down I-55, into the Maywood Mart shopping center, and an order later, I was staring down a beef burger. 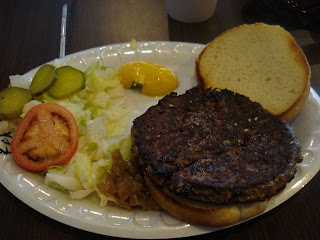 Looking at it now, I’m a little skeptical about this burger. Even made with a press in the kitchen, this seems a little neat. 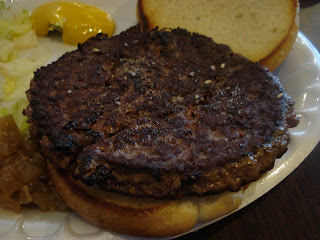 With a char like that, I was confident this was made on a hot griddle and not some charcoaled fire.

Wanting to see how the juicy the beef was on its own, I went in for a bite. 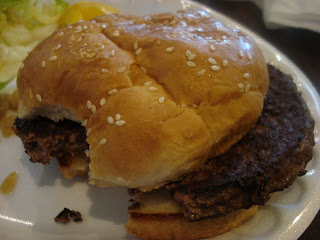 This burger was in desperate need of salt. Yes it was decently juicy and tasty, but it was missing something. Even after dressing it with the excellent grilled onions, some Greek sea salt, and mustard, I had a solid burger but it was missing something. The more I ate, the more I realized this was an overcooked burger. It was screaming for medium rare, not the medium well that I received.

So, one burger later, what did I come away with? If you’re going to serve beef, even the American Kobe, err on the side of rare. Also, salt and pepper the burger before serving. The more I try to cook a great burger at home, the more I’ve found that beef loves salt. Speaking of beef, I’m not really sold on the idea of a burger. Yes a burger is a great embodiment of all things beef, but I’ve had plenty of burgers and never come away amazed. I’m beginning to ramble here, so I’ll cut to the chase: when you go to Wraps, stick to the gyros, it’s what they do best.

For the complete review of Wraps, please click here