Apparently Tye’s has been open since spring of 2008, so it’s flown under my radar for quite some time. I suppose that’s indicative of how little time I spend looking for restaurants downtown, but I digress. Always looking for a new lunch option, I stopped by Tye’s a few weeks ago to see what I had been missing.

I’ll admit, I went in with a bit of a predisposition towards Tye’s. Sometime in mid January, I had gotten a takeout sandwich from Tye’s. I was looking forward to a Philly cheese steak overflowing with meat, onions, and cheese, much like the cheese steaks I had enjoyed during numerous collegiate road trips. Unfortunately, this sandwich turned out to be a double edged sword. Yes, the meat was juicy and very tasty, but there was barely enough to cover half the sandwich.Well, it’s the painful truth that there’s no such thing as a good, whiz cheese steak in this town anyway, so maybe the Monday lunch will prove more successful.

There weren’t too many people inside Tye’s; what do you expect for a quarter past one? I had no idea what to order, so I asked the waiter for his suggestions. A short conversation later, my order was in the kitchen. First up was the bbq shrimp appetizer. 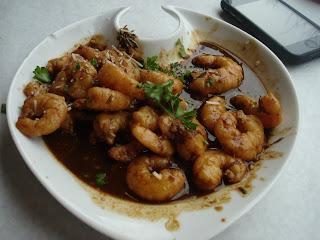 It’s not often you see peeled, tail-less bbq shrimp, but I suppose it makes eating them easier, especially for the lunch crowd. 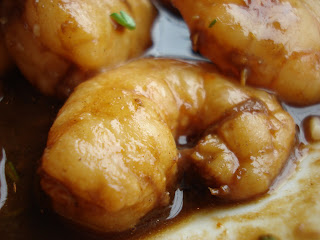 The shrimp were well cooked and the Worcestershire based sauce had a nice flavor with a lingering spice, but it didn’t have any real depth of flavor. Yes, there were plenty of shrimp (more than 20), but there was no real shrimp taste to the dish. I had originally worried about the lack of bread with the shrimp, but there was no reason to sop up the sauce.

A few minutes later my entrée was on the table. 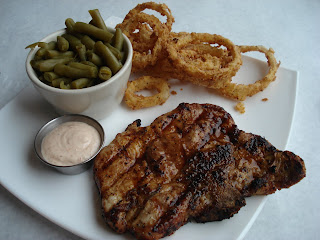 Not a bad looking Monday special, a grilled pork chop, green beans, and onion rings make for a nice combination. 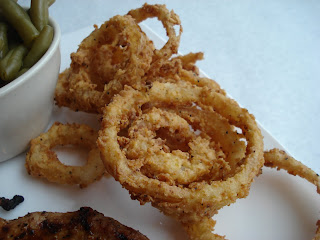 Starting with the onions rings, there was a good crunch and well fried texture, but they were completely underseasoned. 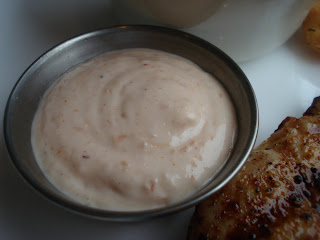 A side of dipping sauce did go quite well with the onion rings, but I was disappointed the rings couldn’t stand on their own, especially since salt and pepper would have remedied this problem.

What about the green beans? 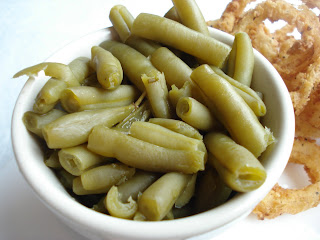 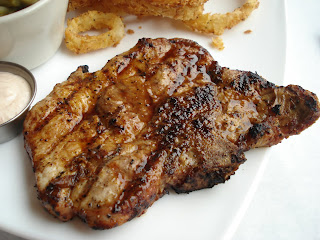 It certainly look juicy, but after taking a few bites, I came away with some disheartening conclusions. For being grilled, there was no real smoke flavor. Of course, being a restaurant grill, there’s no wood or charcoal involved, but when I hear grilled, I can’t help but think of something cooked on a weber. 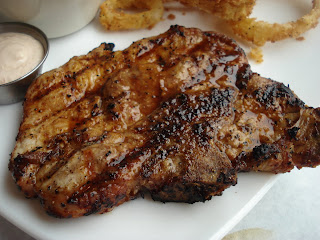 Smokiness aside, the chop tasted like it had a little Worcestershire and maybe some seasoning salt. Aside from that, the chop was dry, too lean, and really just a poor cut of pork.

When I have the ability to visit a place multiple times, I generally wait before writing about it. That being said, Tye’s hasn’t done too well in the first two visits. However, I’ve been told that the pasta dishes are great and I should really try Tye’s for dinner. I don’t really see how dinner will be better than lunch, but I’m always willing to give something another try, and I want to like Tye’s. There aren’t many lunch and dinner spots in downtown Jackson, and I want Tye’s to succeed, but if the waiter recommended pork chop was bad, I’m not holding out too much hope.

I've been to Tye's three times, wanting to like it, but have been disappointed every time. The last time (dry underseasoned fish, limp asparagus and boring potatoes for $20) made me angry enough to give up on it for good.

I tried Tye's a few times and left nonplussed every time. Now it's closed.

Well, since Tye's has closed, I guess I don't have to worry about liking it anymore.

Maybe the Congress Street Bar and Grill can make it work.

Hey Andrew-
My apologies for your horrible experience at my old locale. Unfortunately, you came at the worst part of our venture.....the time that I knew we were closing. I wish I would have been there to cook you those BBQ Shrimp, the recipe from which I learned from Joe Broussard. He was a New Orleans native, and French Cuisine GENIUS. I wish I could have been there to prepare the rest of your lunch as well. Instead, I'm sure I had already left by the time you arrived. May have even been in the basement of the building packing my office. Maybe I'll pop up again soon, and I will invite you over for some good ole' fashioned pork chops, green beans, and some flavorful onion rings. I'm stoked about your blog (which I have stumbled upon tonight for the first time) and will be reading your reviews often. Good luck Andrew!
-Tye