After a few visits to Ruchi India and rather mixed results, I was eager to get Sam to join me for lunch at what I think is the better choice for Indian food in Jackson, Spice Avenue.

I’ll be the first to admit, I don’t know near as much as I’d like about Indian food, but I know what I like and I really do prefer Spice Avenue to Ruchi India. However, my first visit to Spice Avenue last July wasn’t too adventurous. Seeing as I enjoyed chicken and chicken with a side of chicken, I need to branch out severely. In the subsequent months, I’ve done just that, doing my best to broaden my experiences with Indian food. Now I wanted to show Sam just how different Ruchi India and Spice Avenue are.

Like our visit to Ruchi India, Sam and I had a few minutes of vigorous debate about what to order. I wanted to get roughly the same dishes just to show how different each restaurant is. Sam wanted to branch out a little. Thankfully we were able to compromise.

The first compromise came in the form of paneer pakora, or cream cheese stuffed with mint and deep fried. At least that’s what I ordered. 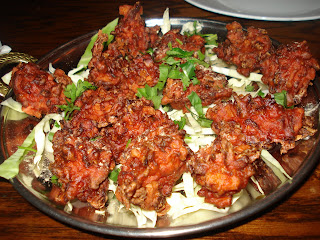 Instead we were given an order of veggie pakora. I told the waiter there was a mistake but he gave me a blank look and walked away. Oh well, at least we got a pakora and coincidentally the same kind we had a Ruchi. Fresh from the cooker, these were quite tasty, but left me perplexed about the flavors. Sam and I spent the next few minutes guessing the flavors and coming up largely empty handed.

Since we had gotten tandoori chicken as an appetizer at Ruchi India, we got a full order at Spice Avenue, and what an order. 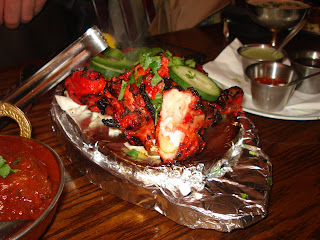 The whole platter came out sizzling and was really a spectacle that made the whole restaurant turn and stare. Once the sizzle died down, we each took a piece and quickly entered roast chicken heaven. 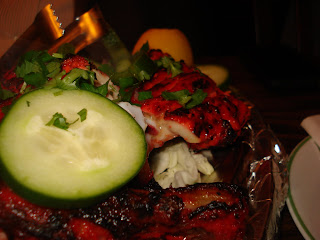 Each bite was tender, juicy and loaded with flavor. There was even a nice trailing heat from the spices. Needless to say, we both agreed this tandoori chicken makes the Ruchi India example hang its head in shame.

Of course, there’s more chicken to come. This time it’s in the form of that lovable Anglicized dish, chicken tikka masala. 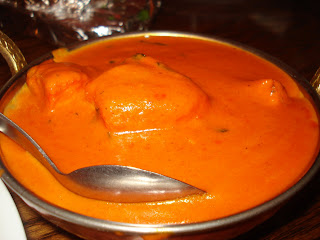 A major difference between Ruchi India and Spice Avenue is the creaminess. Spice Avenue has a much richer, creamier tikka masala, but Ruchi India will win every day for sheer spiciness. That being said, Spice Avenue has excellently cooked chicken that makes for truly pleasant dish, just don’t expect any heat, no matter how much you ask for it.

Continuing with the direct comparisons, the lamb vindaloo was the next dish. 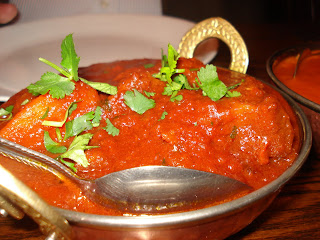 Again, there’s not very much spice to this dish, but this one immediately wins out from the fact the meat is much more tender and just a higher quality. While enjoying some of this vindaloo, it struck me that this seemed like a tomato based stew, but either way, I think it was a little underseasoned.

Last but not least was a biryani, but to give it a nice twist, the meat of choice was goat. 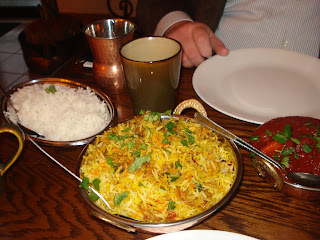 I’m always curious about where people get their products from. I know there is a fair amount of goat raised around Mississippi, but when the owners of Taste of the Island told me their goat was shipped from Miami, it left me wondering about everywhere else. However, that’s a question for another time. Yes, the goat in this biryani was a little chewy, but for the most part, we enjoyed another tender meat. One of my favorite things about biryanis at Spice Avenue is the sheer amount of flavor in the dish. There’s so much going on and there are pieces of cinnamon and clove and cardamom pods littered throughout the dish. It seems like a real sort of everything in the spice cabinet dish.

You’ll be glad to know that Sam and I did a miserable job finishing all that we ordered, and what a staggering amount of food it was. However, I felt like I was doing a service. I was doing my best to introduce a friend to a new cuisine, and we both had the opportunity to see the different approaches and qualities of the two Jackson Indian restaurants. As much as I’d like to remain charitable, Sam and I both agree, it’s Spice Avenue hands down.

It is a dessert, try it next time.