Believe it or not, the city of Jackson has two options for Indian cuisine, Spice Avenue and Ruchi India. I’ve been a relatively regular patron of Spice Avenue since last summer, but I’ve never given much notice to Ruchi India. In fact, I’m not even sure about its history. I’ve been told there was Ruchi on Old Canton Road and a separate Indian restaurant in Ruchi India’s location and at some point they combined to form Ruchi India. All background aside, I had Sam in tow and this was going to be his first taste of Indian cuisine.

Driving past it on the frontage road, you would think that Ruchi India is practically deserted. However once inside, I found it a nice place to be, even if it was a little sparsely decorated in the dining room. One thing you can’t help but notice is the lack of patrons. I’ll grant that we did arrive at one in the afternoon, but we were one of three occupied tables.

I made the executive decision for us to eschew the buffet and order off the menu, but that started the debate of what to order. There was a disappointment when I was told they were out of kheema samosa (ground lamb), but eventually, an order was placed and it was then a waiting game.

My hot tea was the first thing to arrive and this was not what I was expecting. 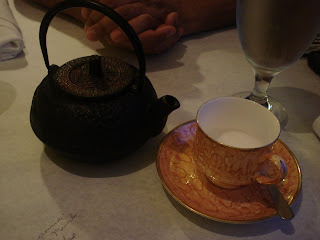 Instead of a pot of black tea, I was brought a cup of chai, I think. While it may not have been what I wanted it was still a welcome beverage for the cold day.

Simply because we had ordered so much food, our waiter brought a complimentary dish of appetizers from the buffet. 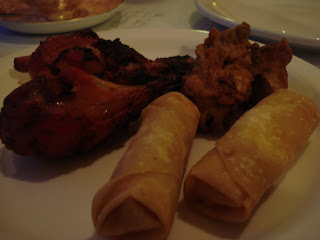 After a pleasant wait, our entrees began to appear. First was the lamb vindaloo. 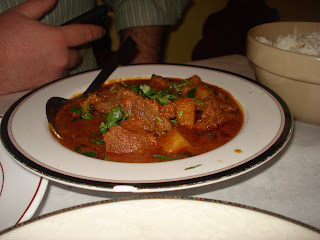 Inside the bowl were the typical chunks of potato and a fair amount of lamb. At first I thought the lamb was delightfully tender, but with each subsequent bite, I found it be a grainy and low quality meat. 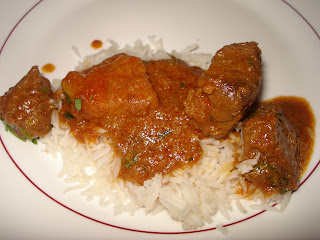 Served over rice, I was disappointed in the level of spiciness to the dish. I’ve always known vindaloo as being one of the spicier of the curries. Yes this had a slight lingering heat, but nothing like I was expecting, especially since we had ordered every dish as spicy.

With one dish down, I quickly made an annoying realization. The basmati rice was completely dried out. I know rice is often left in a cooker for some time, but this was a little ridiculous.


Similarly, the garlic naan had a problem of its own. 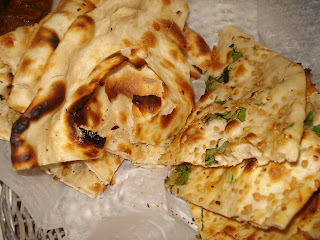 There’s just not enough garlic on the bread. Granted, I always err on the side of too much garlic, so I’ll give Ruchi India a pass on this one.

The next dish was Sam’s choice, the Mughlai Ghost. Labeled as a creamy dish topped with sliced almonds, this was a new one to me. 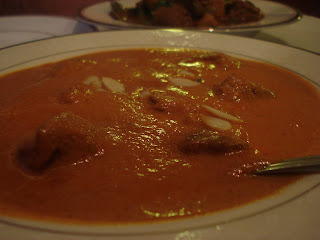 Yes, those are chunks of lamb in there. 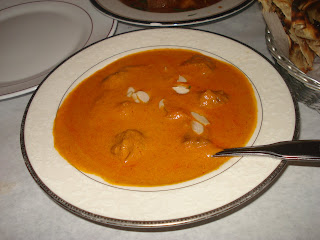 I’ll have to commend Sam as this was a fine choice as far as sauce goes. Unfortunately, the lamb was quite overcooked.

Lastly was one of my favorites and what is quickly becoming my litmus test for Indian restaurants, chicken tikka masala. 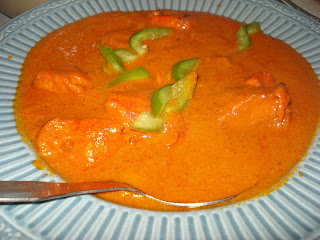 Yes, I know it’s not really Indian. I don’t care, I still like it. 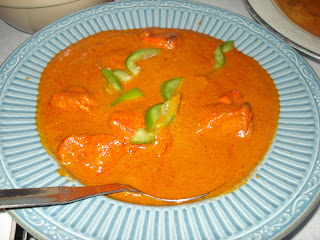 Here, Ruchi India was able to flex their muscles and make a spicy curry. Unfortunately, they didn’t do a very good job of balancing the extra spiciness with extra flavor. However, this was the first dish where the meat was cooked properly.


When all was said and done, the meal had been quite an introduction to Indian cuisine for Sam. It may not have been the best, but I think it established a good baseline. However, I wanted to take another look at Ruchi India to see if what we had was a fluke. So that next week, I went back for another go. 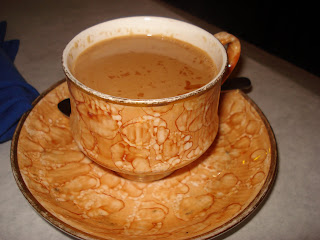 I’m still not exactly sure what’s in this tea, but I’m quickly becoming a fan.

Now that I was on my own, I decided to take a different look at the menu. Unfortunately this met with frustration. Most of the Ruchi India menu has a small explanation for each dish, but there’s one section that was without these helpful hints. Labeled as “Jackson Chaat Bhandar”, there are five dishes with just names. I asked the waiter and he asked if I wanted a vegetarian meal. I told him no, but I still wanted to know what each dish was. He ignored my question and instead asked for my order.

Frustrated and hungry, I decided to go with some Indian restaurant staples and see how they were. While waiting, I again noticed the restaurant was nearly empty. I’m not really sure how this place stays open.

First to arrive was the chicken tikka. 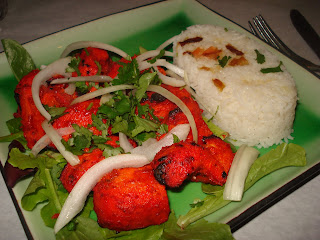 The first time at Ruchi India, the chicken was the only properly cooked meat. I was really hoping that would be a constant. 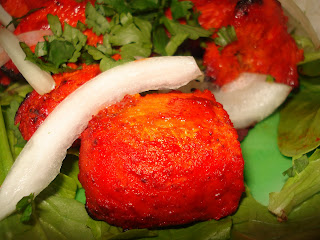 Each piece was completely coated with a thick mix of what should be ghee, yogurt and spices. 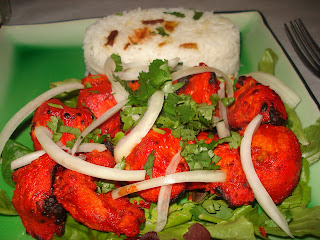 Like before, Ruchi India gets kudos for making their chicken spicy and well cooked. This really was an excellent dish, but I’m a little worried that the chicken may be the best bet at Ruchi.

Hoping to give the lamb another chance, I also ordered the lamb biryani. 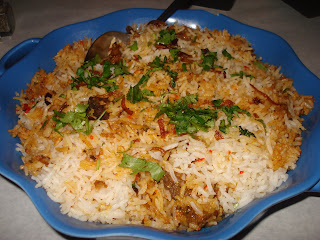 Again, given the opportunity Ruchi India can make things spicy and this biryani was very spicy. 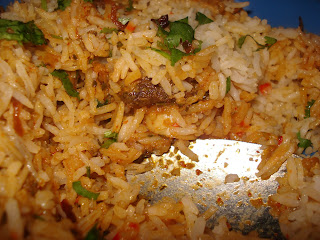 I quickly noticed that there isn’t the variety of spices and flavors that I’ve come to enjoy in the Spice Avenue biryanis. I also noticed just how little meat there was in this dish. I’m not really sure how well cooked the meat was because it seemed like an ounce of meat to a pound of rice.

So, after two meals at Ruchi India, what can I walk away with? I’ll give credit where credit is due, the cooks at Ruchi India can make a spicy curry, however they can’t balance the flavors to accommodate that heat. They also know how to cook chicken quite well, but the lamb seems to give them a little bit of trouble. I’m glad to see there’s competition in Indian cuisine in Jackson, but my money is going to Spice Avenue

In INdia you will get different recipe in different area and also testy!spicy and healthy food is your destination than just visit India and test all veg and nonveg dishes!You just fall in love with fresh and spicy food!

Very interesting topic and thanks for great posting.