To be honest, I wasn’t looking for lunch when I stopped by the Mediterranean Grocery; I was on the hunt for Turkish coffee. Working on a tip from a friend, I walked into a much different Mediterranean Grocery than I remembered. Gone was the relatively small market and three small tables, that had all been replaced with a bounty of groceries and a full restaurant’s worth of tables.

After taking a seat, I was disappointed to find that Turkish coffees were not on the menu. Regardless, I was already seated and there’s never really a bad time for hummus and kibbi. 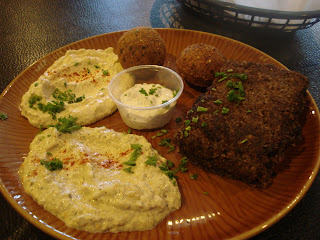 Served with a choice of three sides, the kibbi plate gave me ample opportunity to try some Mediterranean standards.

My first side was a helping of baba ganuj 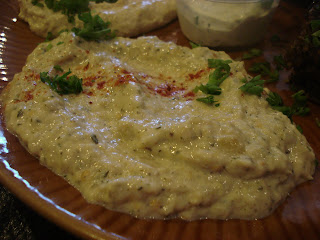 It was not to see that this baba ganuj hadn’t been pureed to death. Each bite had a lot of lemon flavor, but as a whole a pretty good baba ganuj.

Everyone’s favorite, hummus, was the second side dish. 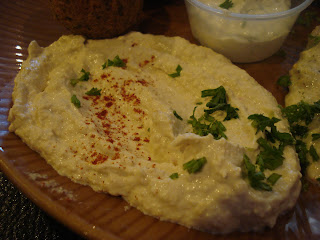 It may not be traditional, but I love a really garlicky hummus. This hummus may not have been as garlic laden as I wanted but it was still very tasty. At the very least, it blows the hummus from Alladin out of the water.

Last of the sides is a fried favorite, falafel. 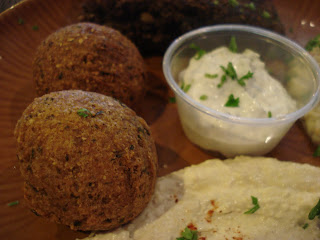 You can tell by the shape these weren’t made with a falafel tool. Each falafel was quite large, but I couldn’t help but think they tasted like a box of falafel mix. A nice compliment to the falafel was the thick tzaziki sauce, another victory over the watery falafel sauce from Alladin

After three sides, it was time for the kibbi. 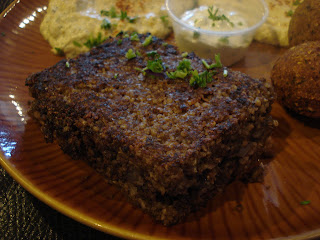 Right away, I prefer the bomb shaped kibbi, but that might be because it’s fried. Still, I’ll gladly eat kibbi from a loaf pan, or Mediterranean meat loaf. Inside the loaf, there are big chunks of onion, but still plenty of meatiness to enjoy. I was a little surprised at how few pine nuts there were, but that’s hardly a fault. The only real problem with this kibbi is that after a while, it got a little too salty for my tastes.

Even without the caffeinated boost of a Turkish coffee, this was a pretty solid lunch, especially for the price. With more than a burger’s worth of kibbi and three sides for only $8.99, this lunch plate is a great deal.

I've eaten only at dinnertime at Mediterranean Cafe, and meals (until recently) have always been reasonably priced with good portions - especially their fish dishes. Their hummus and baba ganouj is as good as anybody else's in Jackson, and after a brief spell of serving wine, they're back to allowing patrons to brown bag. There's a package store in the same strip mall with a good wine selection.

However, the last time i ate dinner there with 2 friends, in April 2010, the vegetable on our dinner plates was doctored-up Veg-All. Yes, you read that correctly: Veg-All - that canned, bland blend of diced carrots, lima beans and i've forgotten what else. I do not go out to eat at a restaurant to be served Veg-All. It looked like they stir-fried it with some herbs and maybe onions, but it was still Veg-All.

They used to serve grilled eggplant or something that at least related to the Mediterranean style of cooking. I'm pretty sure Veg-All is not Mediterranean.

As the Veg-All website proudly declares: "The original convenience food - since 1926."