Looking Back at the King Cakes of 2010

Yes, it’s Ash Wednesday. Carnival season has come and gone, and with it went the parades, Mardi Gras, Lombardi Gras, and most importantly king cakes. It’s true that king cakes are available year round, but king cakes just seem that much better during the few weeks between epiphany and Mardi Gras. Keeping that in mind, it’s time to take a look at some of the king cakes that were enjoyed during the first few months of 2010.

First up was my attempt to make a king cake. Using John Besh’s recipe, I was soon up withering from too much kneading. I fully blame the local grocery store, McDade’s, for the atrocious color combination. 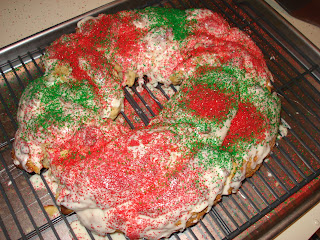 However red and green were the best options available. What’s important is how it tasted, and I’m happy to say that it was pretty good the first night. Until then I’d never tasted a fresh from the oven king cake, and it was quite good. Of course things covered in icing and sugar usually are. Unfortunately, time was the enemy of this cake as by the next morning it had gone practically solid. Well, it was a first effort, and like all things, there’s room for improvement.

Next up is a example of the breed, this one courtesy of Broad Street Bakery. 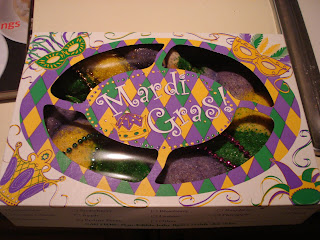 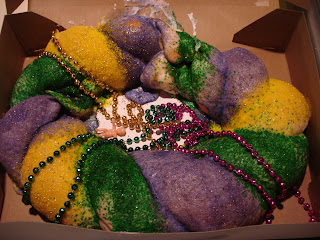 Inside is what I’d call your standard king cake. A brioche style bread that has a thorough covering of powdered sugar based icing and sugar. Already they’ve beat me for presentation, although I wish they had hidden the baby and saved the nickel’s worth of beads for something else. 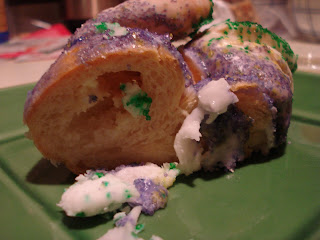 For being the only game in town, does make a pretty moist cake. 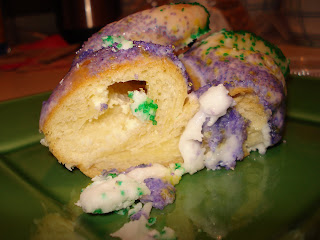 Sugar, icing and a moist cake, this are all the makings of a quality king cake. That would be all you need to succeed, but was quickly overshadowed by their counterparts.

After the saints won Super Bowl XLIV, I made it a point to head down to to see the parade. While the conditions were miserable, it was great to see this first in a lifetime event. Of course, I made a few other stops while I was down in Nola. 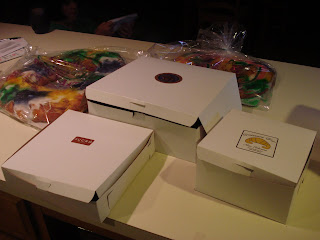 That’s a pretty good haul for one day’s visit.

First from the bakeries is a galette du rois from Croissant d’Or. 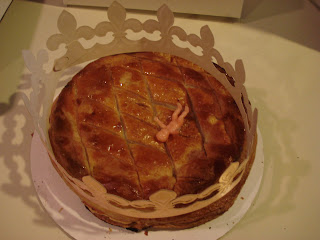 Not what you were expecting is it? 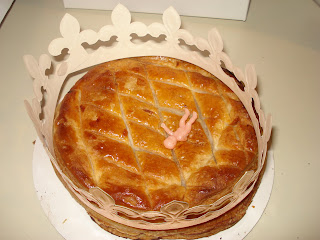 I was told by the bakers at Croissant d’Or that this is a the more traditional French king cake. 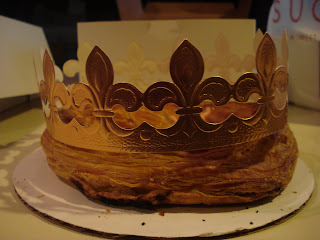 Essentially a cake of puff pastry that has a layer of almond paste or frangipane in the middle, this is a real departure from my idea of a king cake. The taste is like that as well. The puff pastry is well baked and the almond paste has a subtle sweetness. I liked this cake, but be sure to eat this one first. I made the mistake of eating this after trying the others and all I tasted was dough.

Next was a recommendation from a friend on twitter, Nolamaven. I looking for some quality king cakes and she recommended the Laurel Street Bakery. 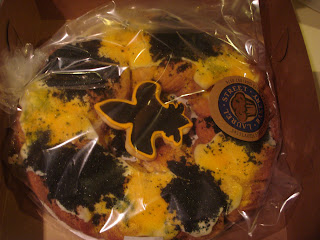 It may not be traditional colors, but I think the Saints’ colors are perfectly apt. 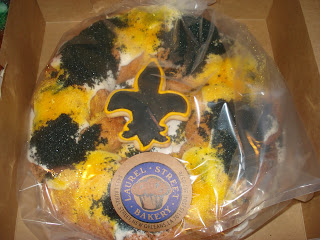 Taking a bite of the cake, I immediately realize this is a better cake than ’s. 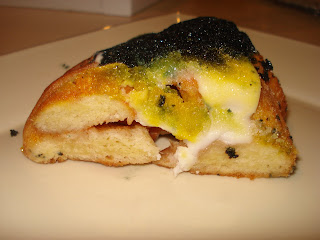 The dough is a little more dense and cakier than I was expecting but it’s quite good with a subtle cinnamon flavor. I have to point out that there seemed to be slapdash application of icing on this cake 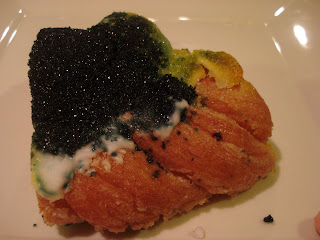 but nothing compares to my poor cutting skills. While trying to cut a piece for Sam, I accidentally severed the baby’s feet. 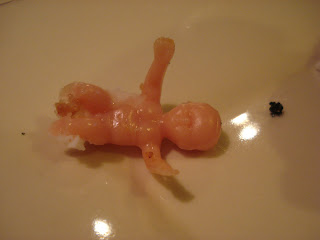 I only found this out when Sam spit out two plastics knobs and I then looked to see the baby dangling from the remainder of the cake.

Sucré provided the next cake and what a stunner. 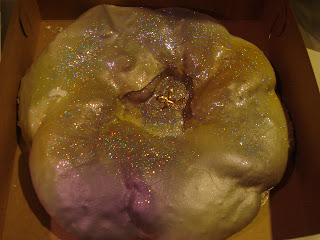 I’ve never seen a king cake that looks like this one. 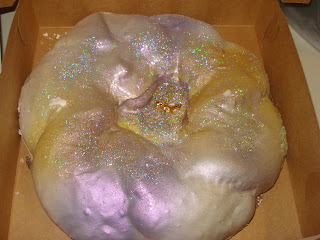 I’ve also never seen a king cake with heating instructions. Looking to see the difference, I tried it unheated first. 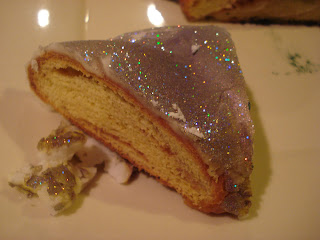 This was another solid king cake, although it was a little odd having a crust of sugar on each slice. However that changed after a few minutes in the oven. 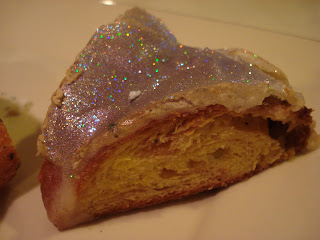 The slice had browned, the icing had begun to melt and everything was hot, sugary, and delicious. 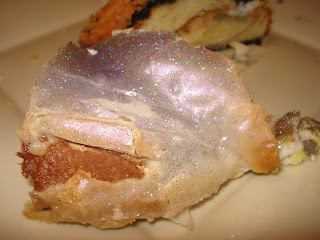 Sucré might win on aesthetics alone, but once heated, the caked turned flakey, the sugar became a thick crust. Overall this was a standout king cake.

Last was the cake that took some effort, Haydel’s. 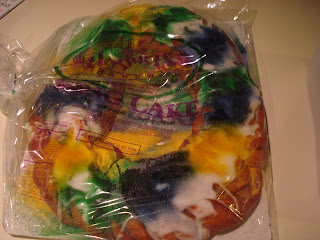 I say effort because going from the Garden District to their location on Jefferson Highway is a bit of a drive, especially during the beginning of rush hour. However, all complaints ceased once I had a bite of the cake. This is far and away my favorite. Each slice of cake is incredibly moist and there’s enough sugar and icing to make a diabetic faint. I wish I had a picture of a slice to illustrate the sheer amount of sugar, but the cake didn’t even survive the weekend.

Well that wraps up the king cakes from this Carnival season. Yes, I realize I left out countless varieties and some big names like Randazzo’s, but I can’t try everything at once. However, I will say if you’re only going to buy one king cake next season; take a look at Haydel’s.

And sure you could have found other colored sugar if you'd looked a bit more. Guess what you're getting for Christmas this year!

Umm...weren't samples being sent to Atlanta?

I got a King Cake from Campbells and was VERY disappointed. Dry cake. Not much worse than that. I heard from other friends, though, that the king cakes from Fresh Market were the worst they had ever had. Luckily, NOLA isn't too far away.

>Sis
-I'm sure Broad Street isn't the only option, but it's the only Jackson cake I tried this year. Also, nothing like colored sugar 10 months from now and there's nothing left to send as samples. Better luck next year, or just get your own.

>Katie
-I never even heard of Campbells till now, but I'm glad I steered clear of their king cake. Do you know if the Fresh Market cake was made in house? Either way, I'm with you, besides, it's more fun to get a Nola cake.

I'm pretty positive that Fresh Market does not make their king cakes in house, as I was once told that their other cakes were delivered frozen. I went to Monroe, LA a few weeks ago and my friend George (a Monroe native) took me to this new place in town called Vieux Carre Gourmet...I was very pleased with their selection of cheeses and wine as well as their meat (also they promised to have ANY fish shipped in overnight). Getting to the point they had an absolutely delicious house king cake. I spoke with the chef, as they serve lunch and dinner (a damn good one at that), and he was showing me around the shop, they had an amazing selection of mushrooms, vinegars, etc. Anyway, if you ever make it up to Monroe you should check this place out, everyone is friendly and they were very happy to help someone who knows a little about food.

what a wonderful cakes and colour and decoration and all this!!wow I got a so many idea for new shape and colour combination.And I like most that King cakes!
acekard