It’s time for another installment from Donald Link’s “Real Cajun”. This time I was looking to feed a crowd, and there are few things more crowd pleasing than a large piece of roast meat. I don’t exactly recall the reasons, but I decided to leave the pricy prime rib roast for the holidays and instead use a much more economical pork shoulder roast.

With his recipe for Smothered Pork Roast over Rice, Link shows that not all Cajun cooking is loaded with spiciness and cayenne pepper. This recipe is simple, comfort food, especially since Link attributes it to memories of visiting his Granny’s house.


How else do you start a meaty comforting recipe than with a large slab of meat? 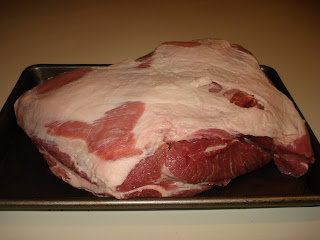 This 6 lb boneless pork shoulder may seem a little costly at 30 odd dollars, but considering I fed 7 people for multiple meals, it’s a steal.

Like almost every roast recipe, this one calls for a healthy amount of seasoning. 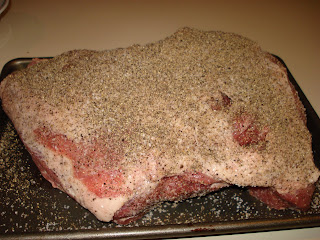 A generous amount of kosher salt and fresh cracked pepper cover the roast. Almost like a bbq rub, Link instructs to rub the seasonings into the meat and leave to rest at room temperature for at least 30 minutes, but no more than an hour.

In the meantime, I prepped the rest of the ingredients. 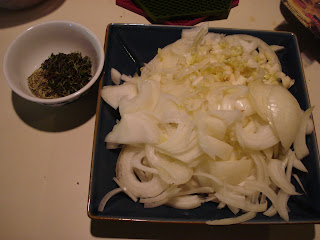 30 minutes and small amount of slicing later, you can see what effect the salt has had on the pork roast. 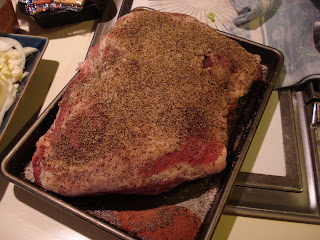 Looking at this makes me wonder if I should brine the pork shoulder next time.

All brining aside, the next step is to get a large enough Dutch oven over medium high heat, add 2 tbs of vegetable oil and sear the roast on all sides. 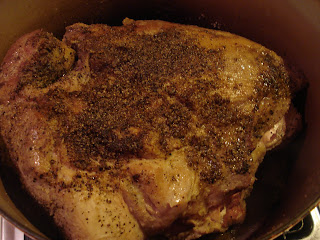 Link says this will only take 10-12 minutes, but it’s important not to rush a good sear. 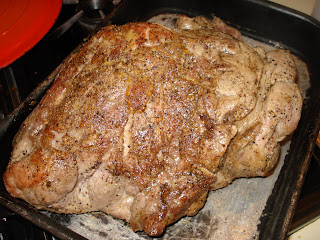 See how much patience pays off?

With the meat seared, it’s time to build the sauce. 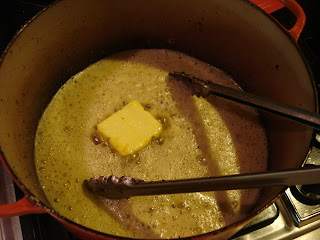 8 tbs or 1 stick of butter is added to the Dutch oven and left to melt. 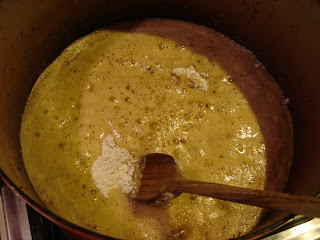 Next ½ a cup of ap flour is added to the pot. Everything is stirred and cooked until it achieves a peanut butter roux, 10 minutes give or take.

Now that the roux is the right color, it’s time for the onions. 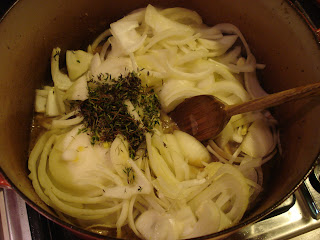 The onions, garlic and herbs are all added to the pot and stirred to coat. 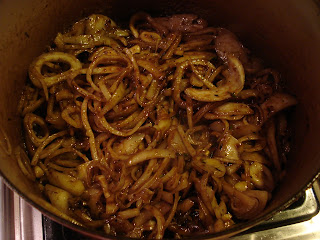 The next ingredient is 4 cups of chicken broth. Seeing as I only had stock in the freezer, I cheated and used a box of broth. 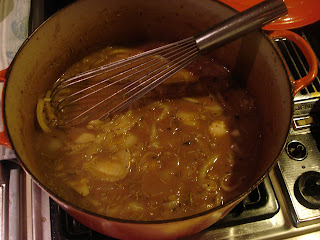 A whole quart of chicken broth is whisked into the pot.

Lastly, the pork roast is reintroduced to the pot. 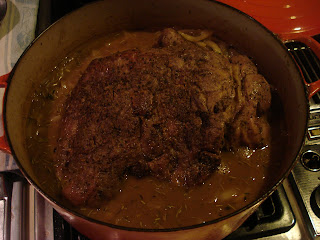 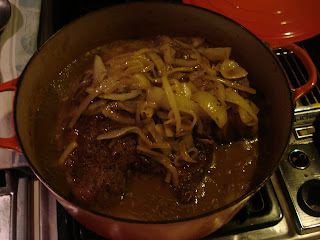 Whoops, can’t forget to cover it with onions.

Now a lad is placed on the pot and the whole thing goes into an oven that’s been preheated to 275 degrees. Three hours and several turns and bastings later, I took the pot out of the oven. 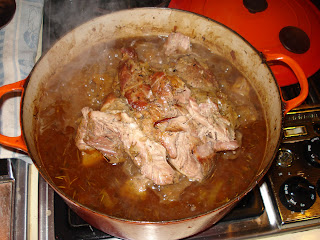 Yes, the roast has become fork tender. Actually this creates a bit of a problem. As you can see, the roast is so tender is falls apart, making the task of removing it from the pot quite difficult. 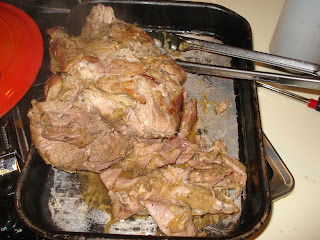 But I persevered and got most of it out.

With the roast removed, I could then reduce the remaining sauce. 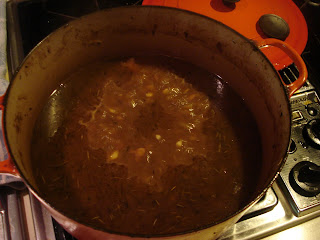 It took 15 or so minutes until it would readily coat the back of a spoon. Waiting on it to reduce gave me plenty of time to figure out what to do with the pork. Seeing as it’s a tender shoulder, I just shredded it with a few forks.

Pork shredded and sauce reduced, it was just a matter of serving it over rice. 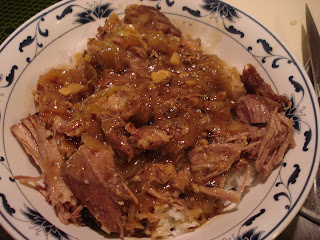 I had to make sure and get plenty of onions. What were the results? Well, I knew from the beginning this wouldn’t be an overly complicated meal, but it was quite tasty. I can see how Link has fond memories of this dish. This is simple, delicious food and another winner from “Real Cajun”

Looks really great. My stomach, literally, just growled when I looked at that.