During the holiday season, every website had their top 10 gift lists. Of course, the world of food was no different. Serious Eats seemed to lead the charge with gift lists for every person, and with categories like “Healthy Eater”, “Asian Food Junkie”, “Hot Dog Lover”, and “Healthy Eater”, there seemed to be something for everyone. One of my favorite categories was “The Ten Best Cookbooks of 2009”. I never turn down a reason for buying a new cookbook, and I recently purchased one from the list: Michael Psilakis’ “How to Roast a Lamb”.

“How to Roast a Lamb” really does invite you to take another look at Greek cuisine. Not only are there a number of recipes I’m dying to try, there are plenty of stories and anecdotes that help the reader get an idea of Psilakis’ concept of Greek-American culture and cuisine.

One story that is really captivating comes at the beginning of the chapter “A Goat And A Lamb”. I won’t spoil the story, but reading it gives you a new found appreciation for the meat we ate and the animals that it came from. So it seemed only fitting that once I chose a recipe that I would use free range, grass fed lamb from Flying M Farm.

Grilled Lamb Chops seems like an overly simplistic recipe for a cookbook, but there’s more to this recipe than meets the eye. First I had to find the necessary lamb chops in my freezer. The recipe calls for 12-18 lamb chops. 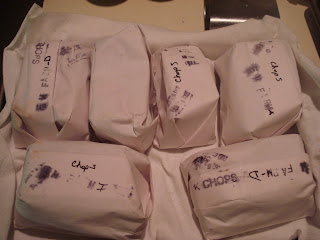 I thought each package had two lamb chops, so at this point I thought I had 12 thick lamb chops.


After defrosting in the fridge, I realized I was quite wrong. 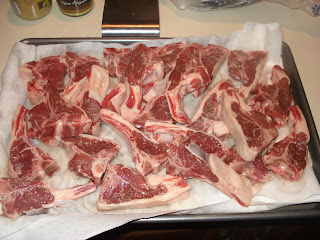 So I had 24 small chops. Well, no matter, I’ll persevere. 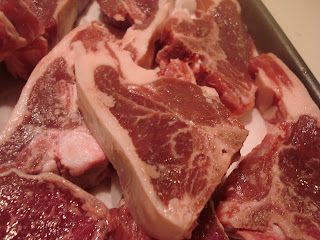 They are nice looking lamb chops, aren’t they?

With the chops defrosted and washed, I started to make the Souvlaki marinade. 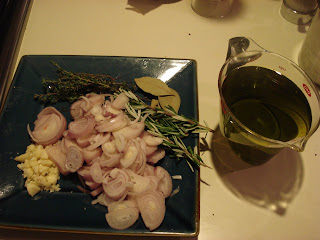 Since I had 24 lamb chops, I decided to double the marinade. So I gathered 2 cups of extra-virgin olive oil (If you call it evoo, you might lose a teste), 6 cloves of garlic that were smashed and chopped, 8 sprigs of thyme, 4 dried bay leaves, 4 sprigs of rosemary, and 4 sliced shallots.

All those ingredients, a fair dose of kosher salt and black pepper, and all the chops were added to a large plastic bag. After making sure everything was coated, I stored it in the fridge for a solid 24 hours, making sure to turn the bag over midway through. 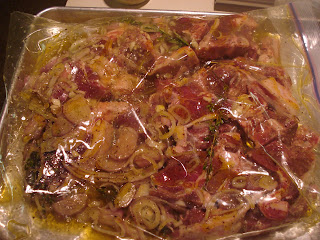 A day later, the lamb chops didn’t look all that different. 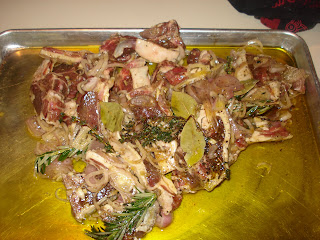 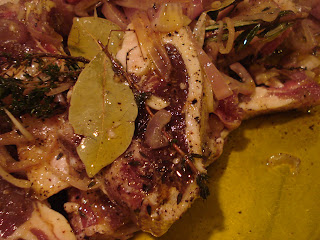 Before I got the chops from the fridge, I had a good fire going in my big green egg. I was cooking a number of things, but I was really focused on the chops. So after letting the marinade drain, the chops were given a liberal dose of salt and pepper. 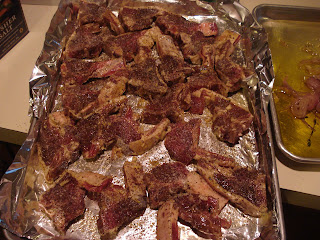 I had to remind myself to season both sides.

Being dark outside and working with a 600 degree fire, I had no time or means to take pictures. 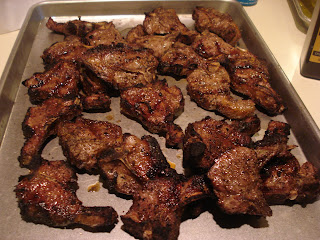 However after less than a minute per side, I had my whole batch of lamb chops ready. 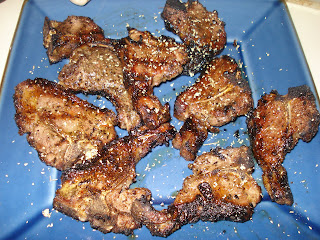 Even without the puree, with just some olive oil and a sprinkle of dry Greek oregano, these were delicious lamb chops. Actually the diminutive size made these almost the perfect finger food. So even with a few setbacks, I was very impressed with the my first recipe from “How to Roast a Lamb”. I’m sure with Spring on the way, and more accommodating grilling temperatures, I’ll have more to report, but in the meantime, I highly suggest picking up a copy of “How to Roast a Lamb”.