Oftentimes I find myself in a quandary about what to cook. These times usually end with me going to my ever growing collection of cookbooks, thumbing through a few here and there and eventually settling on a Dunlop recipe. However, this was not one of those times. I had it in my mind that I wanted Chinese style crabs. I wasn’t sure what I meant by Chinese style but it was convenient that Grace Young and Alan Richardson’s “Breath of a Wok” held the answer. In a section aptly titled “Stir-Frying Fish and Shellfish”, there was a recipe for Danny Chan’s Crabs with Black Bean Sauce. I’m still not quite sure who Danny Chan is, but I was more than happy to give one of his recipes a try.

From the get go, I made a fundamental error, one of many lately. Instead of using live blue crabs as instructed in the recipe, I was eager to use some of the gumbo crabs I had stashed in my freezer. Regardless of this error, the crabs were already cleaned so all I had to do was cut off the small legs and cut the crabs in half.

Starting from the top and working to the right, I had 4 blue crabs cut in half, 1 tsp of corn starch mixed with 2 tbs cold water, the white ends of 2 scallions, 1/3 cup of chicken broth, 1 egg beaten, 4 slices of ginger, the green parts of the 2 scallions, cut into 2 inch sections and mixed with 1 tbs soy sauce, ½ tsp salt, ¼ tsp white pepper, 2 tbs of ground pork, and lastly 1 tbs flack beans that had been rinsed and roughly chopped.

It may seem like a long list of ingredients, but it seems right on par with most Chinese dishes. 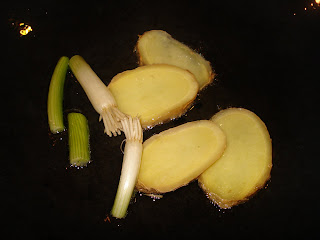 In a large flat bottomed wok, I put 2 tbs of vegetable oil on high heat and then added the ginger slices and whites of the scallions. 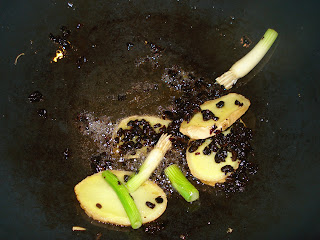 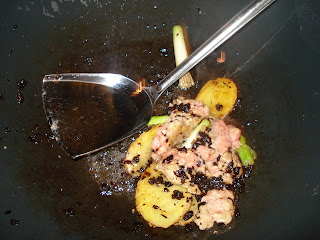 After another 10 seconds of stir-frying, I added the ground pork and cooked it until the pork was no longer pink, roughly another 20 seconds.

Now it was time to add the main ingredient, the crabs. 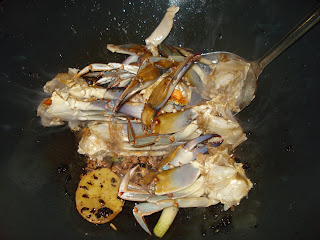 Another 20 seconds of frying and it was time for the broth. 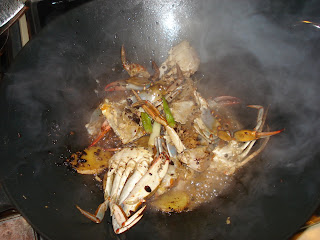 From here, the batch was covered 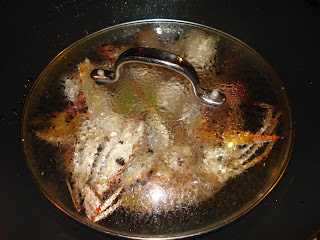 and left to cook for 3-4 minutes or until they turn a pleasant orange. 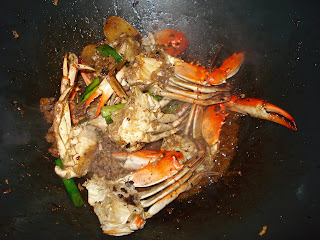 After stirring midway through, I added the soy sauce, salt, pepper, and the greens of the scallions, mixed and covered again for 1 minute.

At this point, everything seemed like it was working quite well and I wasn’t sure about the purpose of the last two ingredients. 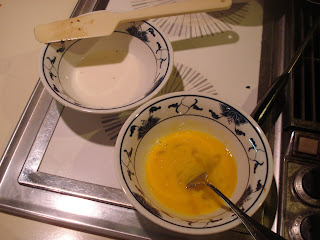 Regardless, I added the cornstarch to the wok and swirled in the egg. 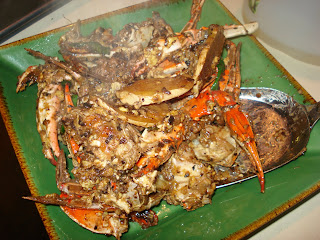 It wasn’t 30 seconds before I turned the whole mixture out into a bowl. 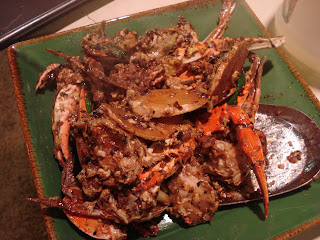 Well, what’s the verdict? This was a delicious recipe, but my ineptitude in using frozen crabs ruined the entire thing. That just goes to show that frozen crabs are really only good for stock. I’ll have to remember to get fresh crabs next time I’m in New Orleans, and then I can do this recipe justice.