After the deliciousness that was Kylie Kwong’s Prawn Wonton Soup, I eager to try another example of the dish. Conveniently, I had recently picked up a copy of Andrea Nguyen’s “Asian Dumplings”, and what a contrast to Kylie Kwong’s “Simple Chinese Cooking”. In her new book, Kwong writes about dozens of varieties of Asian dumplings, covering not just stuffing, folding and cooking the dumplings, but how to make your own wonton skins. Yes, apparently picking up a package of wonton skins from your local Asian grocery is no longer sufficient. I’m eager to delve more into Nguyen’s new book, but for now I’ll stick to the rudimentary Shrimp Wonton Soup (Yúntūn Tāng)

One thing that separates Nguyen’s recipe from Kwong’s is the number of ingredients for the filling. Including salt and pepper, there are only 6 ingredients to Kwong’s 9. However, I’m getting ahead of myself. Like any soup, you have to start with the basics and that means making stock, chicken stock in this instance. 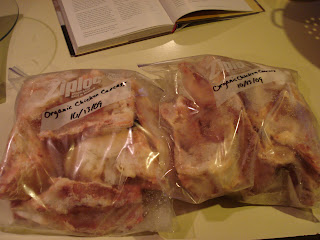 Yes, I got these from my local butcher. The only thing that worries me is with the recent rash of soup making, I think I’m almost out of chicken carcasses. 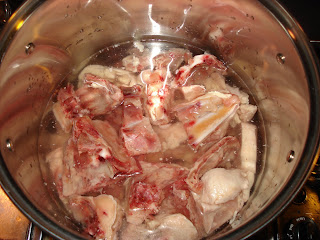 The chicken was rinsed to get rid of any bloody bits and then cleaved into 2 inch pieces. This would be a fun stage if the kitchen didn’t get covered in specks of half defrosted chicken bones.

Now that the bones are cut, they are placed into a stockpot, covered with 4 quarts of water and brought to almost a boil. 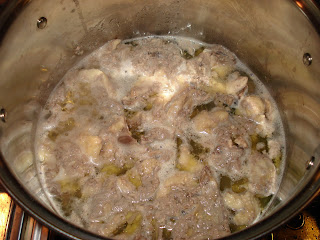 As always, there’s lots of scum to skim off.


You can’t forget the aromatics. 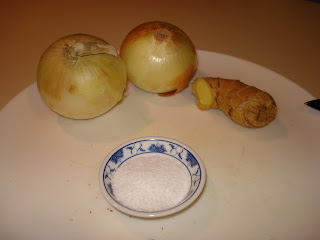 1 large yellow onion, or 2 medium ones in this case, 3 inch piece of ginger, and 2 ½ tsp of salt round out the ingredients. 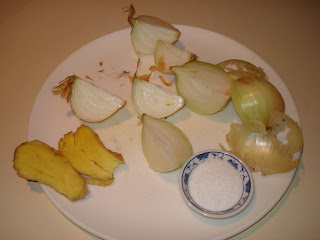 The onions are quartered and the ginger smashed with the broad side of a knife. 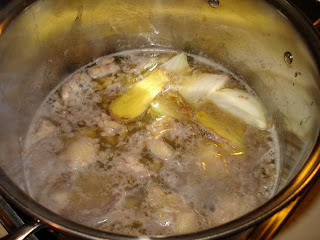 Everything is then added to the pot and left to simmer for 2 ½ hours.

After 30 minutes of resting, the broth is strained through cheesecloth. 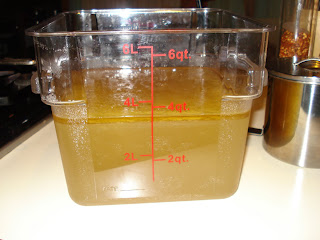 Nearly 4 quarts of glorious stock and would you look at that layer of schmaltz!

With my stock made, I could now focus on my wontons. 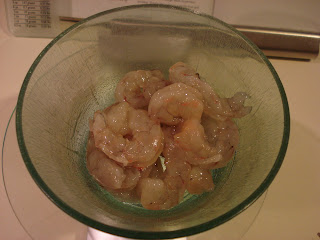 It starts with a scant 4 ½ ounces of shrimp. 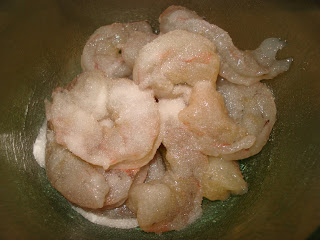 Which then get tossed with 2 generous pinches of salt. I’m not really sure what the point of this step is because the way it’s written you rinse the shrimp almost immediately after salting them. 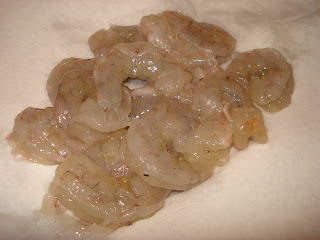 Rinsed, strained and blotted dry, I suppose the salt got rid of some impurities?

In the meantime, the rest of the ingredients are corralled together. 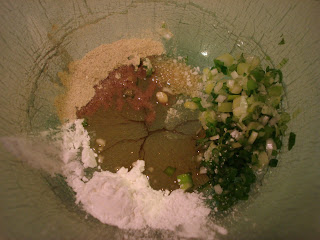 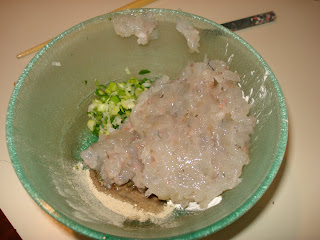 The finely chopped shrimp are added to this bowl of ingredients. 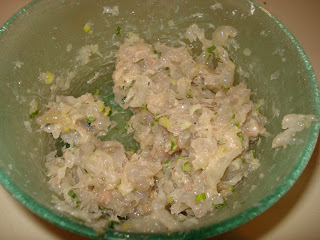 Everything is then mixed together to form a nice homogenous mixture. The bowl is covered with plastic wrap and refrigerated. Nguyen actually writes to “set aside for 30 minutes before using, or refrigerate for up to a day in advance.”

Anyway, a few hours later, I remembered I needed to actually make the wontons. No, I didn’t actually make my own wonton skins. Conveniently, with this recipe, Nguyen gives a lazy day tip about how to buy good, commercially made skins. Hooray for lazy day tips. 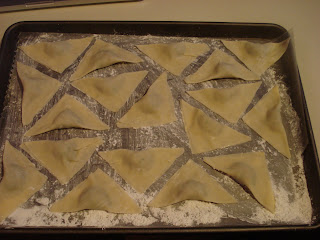 Double hooray for lazy wonton folding! Yes the simple triangle may not be much in the way of aesthetics, but it’s fast, simple, and gets the job done. 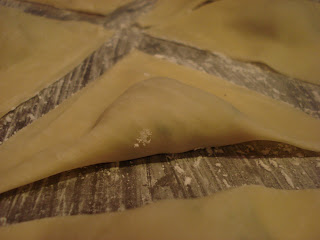 Yes, they looked so good, I decided to freeze them for another cold day.

A few days, a few weeks, some amount of time later, I was pining for a bowl of wonton soup, wasn’t it lucky that I had Nguyen chicken stock and wontons in the freezer. 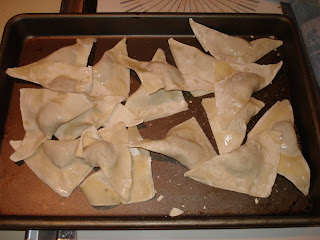 Per Nguyen’s instructions, I let the wontons partially defrost before I cooked them.

Now defrosted it was time for a bath. 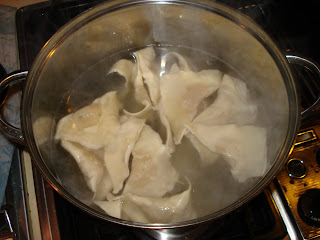 The idea is to put the wontons in a large pot half full of boiling water. The wontons are supposed to float for the top and be cooked over medium for 2 minutes until translucent. 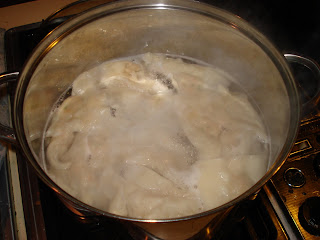 I don’t know about translucent, but 2 minutes seemed like plenty of time for these wontons.


I hope you didn’t forget the stock. 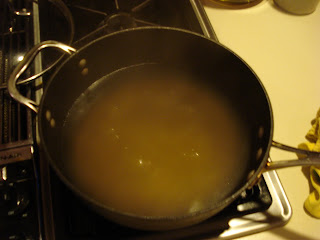 Only 1 quart of the chicken stock is needed for the recipe, but Nguyen instructs you to boil the stock, lower to a simmer, and then cover to keep warm.

Dumplings cooked and the stock simmering, it’s time to combine the two. 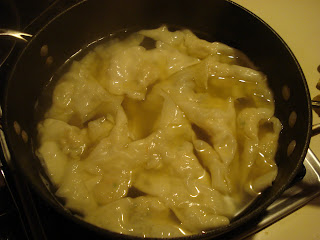 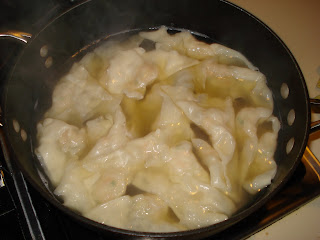 Don’t forget to let the wontons simmer in the stock for a minute or so, just to soak up some of that chicken goodness.

With the wind howling at the kitchen windows, I was eager to see if this soup would help me weather the cold. 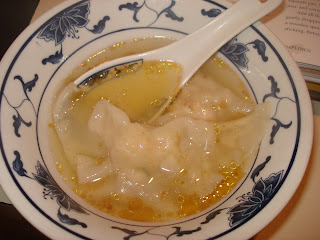 By itself it was a little bit flat, but Nguyen finishes the job by advising to add a dash of sesame oil and a sprinkling of pepper. Those extra touches make the dish really come alive. This may not have the pungent, cilantro flavor of the Kwong recipe, but it’s a precocious start to my cooking from Andrea Nguyen’s “Asian Dumplings”.