I’ve written about Bon Ami before, sometime last November. However that was a rather unfair look at this restaurant. In a restaurant that’s tilted more towards salads and panini’s, I was there for a burger, and not a great one at that. With that out of the way, I decided to take another look at Bon Ami and see what else they had to offer.

Like I said before, there really is a plethora of salads to choose from on the Bon Ami lunch menu. There’s chicken, tuna, oriental salmon, and crab cake just to name a few, but I don’t really care about that. Yes, I enjoy a good salad, but I need something with a little more….body to it.

There’s also a fair selection of sandwiches, but when you’re in the mood for a big pastrami on rye, a tomato and brie just doesn’t cut it. Well, I could go making passive aggressive comments about the selection at Bon Ami, but it doesn’t deserve that. It’s a perfectly nice restaurant that happens to have a menu that’s oriented towards the opposite sex.

That all being said, I had driven to Bon Ami and I was hungry for lunch, so I delved a little deeper in the menu to find something that would suit my tastes. Well, I succeeded and the first thing to the table was a cup of the soup of the day. 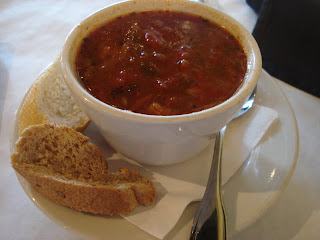 The cup of sundried tomato and artichoke soup was an interesting take on a the classic tomato soup. 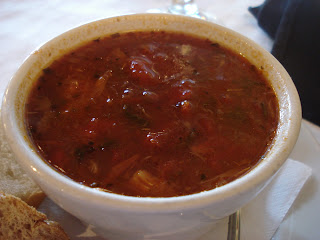 Copious amounts of sundried tomato gave the soup a unique texture and a very pronounced tomato flavor. The only real faults were the soup being a little watery and the seeming absence of any artichokes.

Wait there’s more to come. Yes, the soup was nice and a good bit better than the weak French onion soup I had during the burger visit, and this entrée was much better as well. 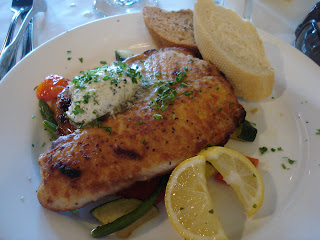 Billed as sautéed tilapia with lemon shallot butter and sautéed vegetables, I was expecting a small piece of fish and a tiny pad of butter. As you can see that’s far from the truth. 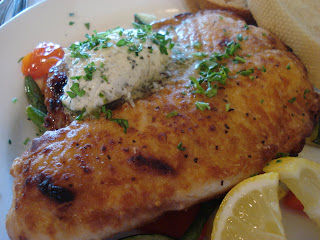 The fish was excellently cooked with crisp edges and a perfectly moist interior. Of course the best part took a minute or two. 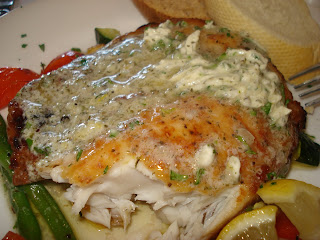 In just a few minutes time the butter melted, coating everything it’s rich, herby goodness. Even the vegetables underneath the fish were excellent, especially considering how out of season they were.

I won’t recant all the mean things I said about Bon Ami. Red meat is extremely scarce in this restaurant as are many things I think of when it comes to a French restaurant. There are no rillettes, terrines, foie gras, or any liver in site, but then again that is all based on a misconception. Despite the name, Bon Ami is not at all French, nor does it serve any really inherently French cuisine. Still, I came knowing I would struggle to find something I really wanted for lunch. Well, I found it in the form of a little fish and a lot of butter, but even so, I’ll leave Bon Ami for those looking for a lighter, almost daintier meal.