It’s never hard to think of an excuse for shabu shabu, but a little chill in the air never hurts. Of course, I was back in and I had soup on my mind. After a little deliberating with Jennifer and waiting on Aaron, the three of us drove to Nakato for a little shabu shabu.

Call it a force of habit, but even with shabu shabu on the way, I made sure that we enjoyed a few appetizers before the main event. First was the shumai. It may be a small touch, but the presentation here is great. 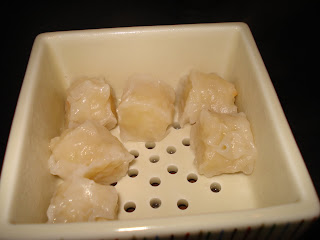 Unlike Chinese dim sum suimai, these shumai are very small and made solely with shrimp. Also unlike the Chinese version, they have a very odd, almost mealy texture.

As always, one order of dumplings wouldn’t suffice. This time it was pork in the form of the house gyoza. 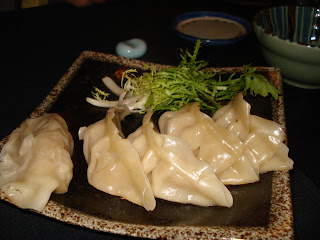 The first thing you notice about these gyoza is that they had a little bit of a heavy hand with the green onion, but in a good way. Even though I liked the gyoza better than the shumai, neither one was out of this world. Still, it’s hard to turn down a dumpling.

When I saw our last appetizer on the menu, I knew that neither Jennifer nor Aaron would object. 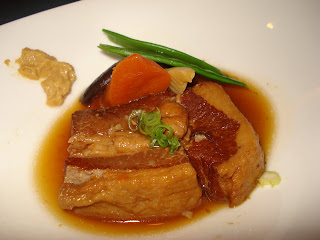 The pork kakuni immediately reminded me of the buta-kakuni from Shoya Izakaya. 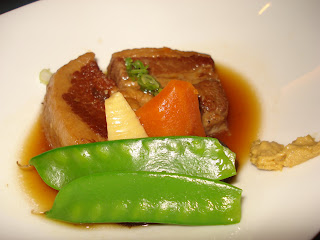 Here the kakuni was rich but just a little on the chewy side. I think I prefer the buta-kakuni from Shoya Izakaya, but the version at Nakato has a great soy broth and isn’t dry at all.

Before we could finish all of our appetizers, our waiter brought out gas burner and bowl for the shabu shabu. 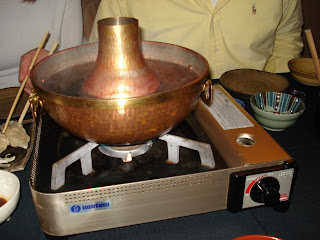 I’m not sure if this is the traditional design for a shabu shabu pot, but this design has a definite drawback. It doesn’t happen often, but sometimes I get shabu shabu where the beef has been sliced with the grain. Thankfully Nakato avoid that pitfall as our waiter presented a plate of paper thin, well marbled beef. From here it’s pretty standard shabu shabu fare. One thing I really liked was the variety of mushrooms. There were the standard shitake, but we also had enoki and buna shimeiji mushrooms as well. 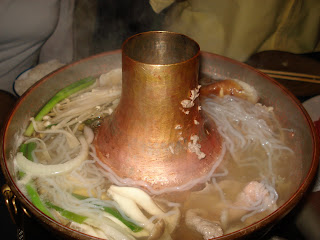 In no time at all, we had a great pot of broth. However, we soon ran into a problem with the shabu shabu pot. 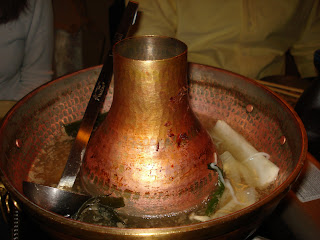 Even with this ladle, there was no good way to get the broth out of the pot. Another disappointment with the shabu shabu at Nakato was the lack of extra steps. At my local shabu shabu restaurant, when you’ve finished fishing out the meat, they add miso and rice to make a sort of porridge for you. Maybe it was the fact that Nakato was trying to close, but there was no offer or mention of this extra step.

Forgetting a fiddly pot and no miso flavored porridge, the shabu shabu at Nakato was an excellent choice. Come to think of it, every meal I’ve had at Nakato has been an excellent experience, minus a parking incident or two.

Thanks for dining at our restaurant! I'm sorry to hear about incidents in our parking lot & I've heard of making Ojiya (rice soup) after Yosenabe, but I have never heard of rice & miso going in after Shabu^2. Thanks for letting me know. Traditions & cooking style vary from region to region so this must be one of those variations.

The broth after all the veg. & meat is cooked IS delicious.

Next time you're in please say hi to Yuki or Sachi.

We'd love to compensate for the car break-in and love to treat you to a Yosenabe or Sukiyaki.

I think a man who slice beef he does it so wonderful, and gives me a big lesson knowing how to make all things right. Buy Viagra Viagra