Tuscaloosa again and time to try another recommendation by an anonymous reader. This time I’m skipping the Thai food and going for a little bbq at Mike & Ed’s BBQ. 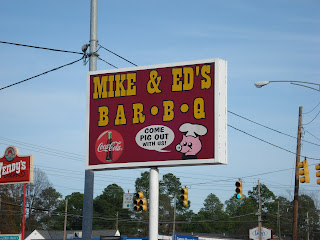 It never hurts to have an anthropomorphic pig on your sign.

With nothing to go on, I decided to play to take a chance on a combo plate of ribs and pork. 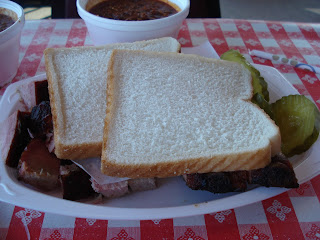 Like almost every other bbq restaurant on the planet, this plate came with some slices of white bread. 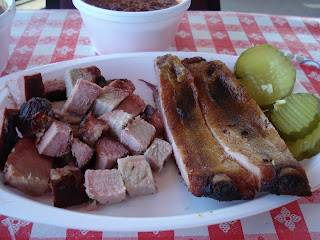 I have to admit, I was a little disappointed that I only got 2 ribs on the combo plate, but there’s a decent amount of rather dry looking pork.

At Mike & Ed’s, you have three options in how you get your pork, I went for the chopped. 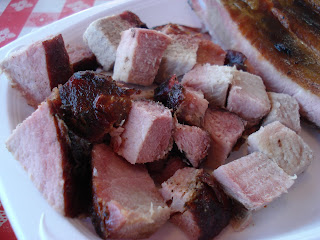 Thankfully the first thing I noticed was there was real evidence of smoke. 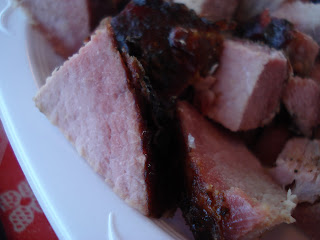 Not only was there a smokey taste, there was an actual smoke ring. Unfortunately, this pork was more than a little dry. Maybe some sauce will help. 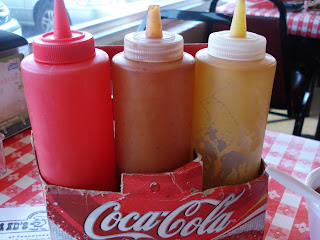 I’m going to frank. I’m getting a little tired of bbq restaurants trying to have sauces to appeal to every palate. Can’t people find a sauce that works and then stick to it? 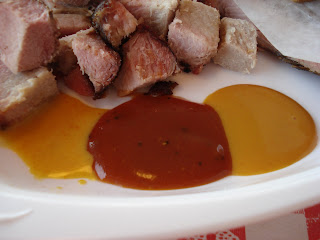 Anyway, from left to right, I had the option of hot bbq sauce, hickory, and finally mustard. With the hot sauce, the chopped pork didn’t get any real help with flavors, but there was a nice tinge of heat. The hickory sauce worked decently well, but even with the sauce, the pork was very dry. Lastly, the mustard sauce was another taste of banality.

With my combo plate, I had a choice of sides. I’m not sure why, but I decided to go with two soup/stews. The first side was a cup of brunswick stew. 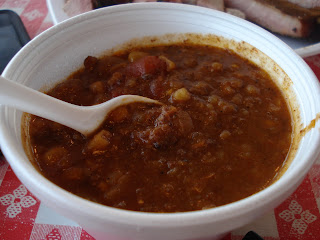 Finally, I had something really tasty on my hands. 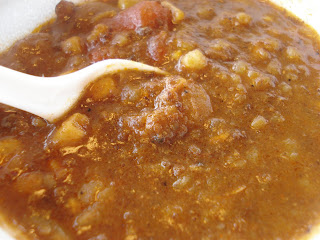 This was a rich stew with lots of meat, tomatoes, butter beans, and corn. It was just what the doctor ordered for a chilly day.

Of course, it wasn’t all sunshine and roses as my other side was chili. 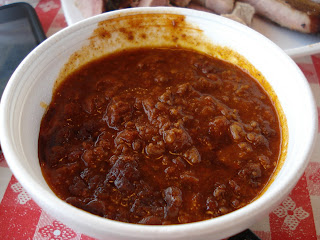 In my mind, points are automatically deducted for having beans in chili. 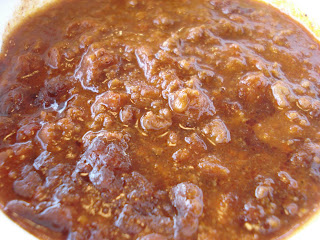 Moving past the beans, there was a nice touch of chili powder taste, but it was a uncooked spice taste. However, the biggest strike against this bowl of red was a distinct burned grease taste.

At this point in the meal, it was painfully obvious that this bbq had been sitting out for some time. Everything had a chill to it, and I know that bbq is not made to order, but I expected a little more than room temperature. Anyway, it’s time for the ribs. 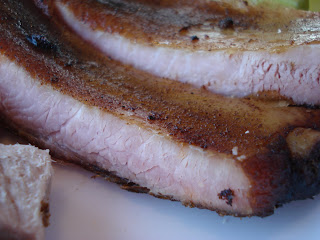 Like with the chopped pork, there is more pleasant evidence of actual hickory smoke. Another bonus was how the meat tore from the ribs. The meat didn’t fall off with a hair touch, you needed a little effort to get the meat from the bone. However for every high point, there seems to be a low. The ribs were on the dry side, and I couldn’t find or taste any evidence of a rub. Moving back to the sauces, the hickory sauce improved the ribs a good bit, but the mustard and hot sauce didn’t bring anything to the table once again.

So what’s to be said about Mike & Ed’s Bar-B-Q? I’ll have to give them credit, unlike one of the more well known Tuscaloosa bbq joints, Mike & Ed’s has evidence that they really use smoke in their products. On the other hand, even with the smoke, this is just average bbq. Of course, I’ll have to stop by Mike & Ed’s again to try some of the other meats, but I have a feeling there’s better bbq to be had in Tuscaloosa.

Mike & Ed's is a chain believe it or not.

I still haven't found some decent BBQ in Tuscaloosa but I have not been to the Archibalds on MLK which is supposed to be the best.

I haven't found many good places to eat either but The Oasis in Cottondale has the best local burger and onion rings (Big Bear Combo).

A little out of the way but check it out. Its a hole in the wall.