Market at the W Buckhead - Atlanta

Market, another venture of Jean George Vongerichten, was next on my ever increasing list of lunch options. So after braving the blustery winds, my sister and I were seated and ready to peruse the menu. 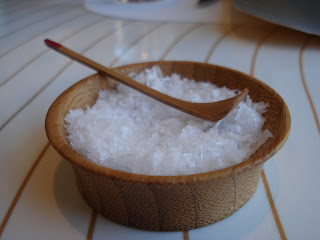 There’s no shortage of unique, hip, trendy, cliched, (pick your adjective) appointments inside Market, but I really enjoyed the salt cellars.

Salt cellars aside, we quickly decided that the appetizers seemed much more appealing than any one entree. The first of those entrees was the creamy tomato soup with aged cheddar, sourdough, and basil. 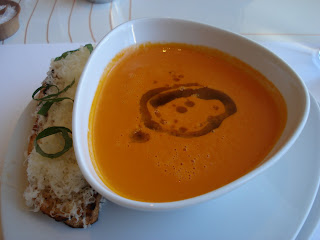 Maybe it’s just me, but I was under the impression that everything would be in the soup. 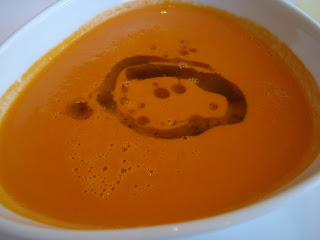 Anyway, the soup was perfect for the chilly day outside, although I’m not sure what oil was in the middle. Thankfully the soup was true to it’s name as it was creamy and very rich. 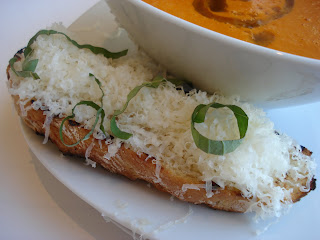 There was no shortage of cheddar on the sourdough.

One thing that Market seemed particularly proud of was their house made sodas. 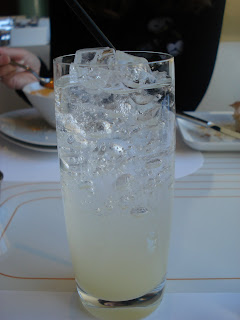 I went with the ginger soda and was quite pleased with the results. There was a ton of ginger flavor and no overpowering artificial sweetness.

I’ll have to admit, the wait staff at Market is on the ball. As soon as we finished our soups, the appetizers were on the table. Granted, the fact that we were one of 3 tables might have helped the service. Regardless, the crispy calamari with yuzu dip and sesame salt was my first choice to try. 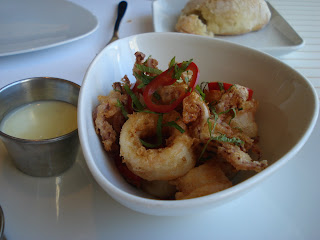 By itself, the calamari was lightly breaded and tender, but with the lemony dipping sauce it made for a rather interesting combination. 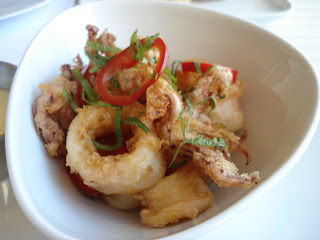 Even with chilies in the bowl, these calamari needed a spicy kick, or at least some black pepper. Of course, when I started to look for pepper, I found it conspicuously absent from every table.

Our next dish was a risotto, but not just any risotto, a parmesan risotto with fall mushrooms and herbs. 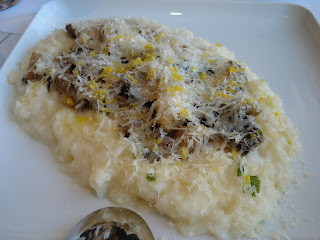 Topped with plenty of cheese and lemon zest, this was a dynamite risotto. It was everything you could want in a risotto. It was creamy, rich, filling and even better, the lemon wasn’t at all overpowering.

When we ordered the next appetizer, peeky toe crab dumplings with a celeriac-meyer lemon tea, the waiter was a little verbose about how healthy the dumplings were. Apparently the dumplings garner their health food status from being served in tea instead of a broth. 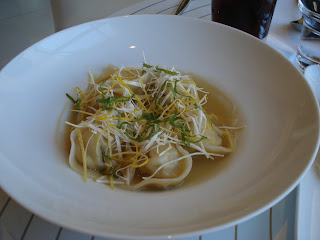 Thankfully there was plenty of crab in each dumpling. 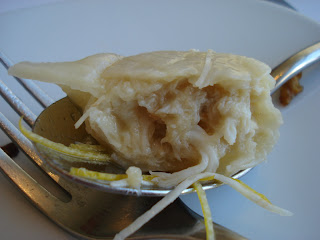 However I was a little taken back by the amount of lemon strewn across this dish, but it worked quite well. 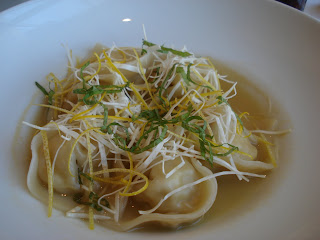 Yes the tea was a nice touch, but I would have been just as happy with a simple broth.

I think the last dish was our unanimous favorite, and that was a lamb sausage pizza with spiced vegetables and goat cheese. 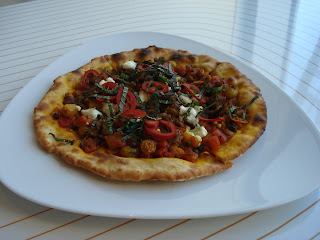 For such a small pizza, there was a lot going on. 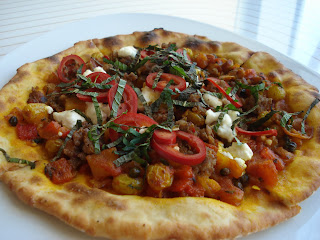 Starting with the goat cheese, I was a fan of its tartness and how it nicely contrasted with the spicy lamb and vegetables. 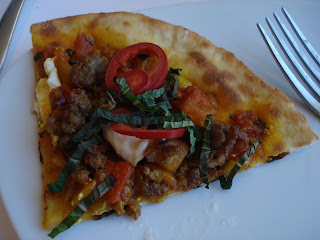 A great part of the dish was the crispy, thin crust. That crust along with the lamb, the vegetables, and the goat cheese made this an excellent little pizza.

Even though every dish seemed covered in lemon zest, I enjoyed this excessive lunch at Market. I’m curious to see if I’ll receive the same level of service when there are more patrons but that will have to wait.