When I originally wrote about Cool Al’s it was the beginning of a quest for the best bacon cheeseburger in .Currently the quest is on a bit of a hiatus, but I always felt that Cool Al’s didn’t get a fair shake. Sam and I had gone straight for the kill by going for a 15 oz Cool Al’s classic with bacon (turkey). Unfortunately that burger was simply too big. Being so large, the outside was overcooked to ensure a safe center. Another byproduct of the size was that the patty seemed to fall apart with the slightest touch.

With these faults in mind, I went for the opposite end of the size spectrum for Cool Al’s second look. 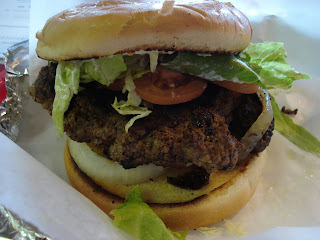 The Cool Dell’s Jalapeno Onion Burger was the first 5 oz burger to arrive. 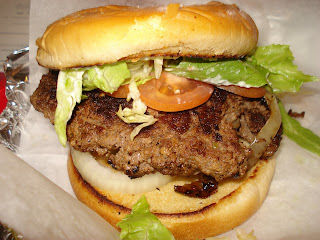 Supposedly onions, jalapenos, and “special seasonings” are slow cooked in the meat. I’m just surprised at how large this 5 oz burger is. 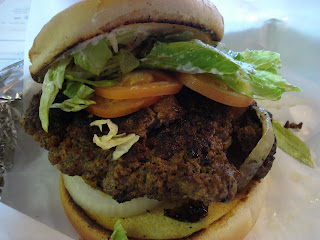 It was a real treat when the first bite was juicy with a good, clearly defined crust. True to their word, the onions and jalapenos were inside the patty and each bite came away with that great flavor.

As much as the Cool Dell had improved my opinion of Cool Al’s, there’s nothing that can help my opinion of their speed. From the time I order to the arrival of my second burger, a full 45 minutes had passed. During a busy lunch hour, that might have been permissible, but they had at least 5 people behind the counter and less than a dozen customers the entire time I was there.

Eventually I was able to get a taste of the second burger I ordered, Sinbad’s BBQ Bacon Burger 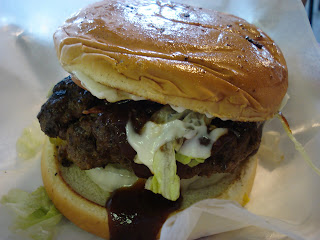 I have the odd habit of trying individual components first, and when I tasted the bbq sauce I was torn. Was this K.C. Masterpiece bbq sauce or Jack Daniel’s BBQ sauce? Either way, I’d wager a few bucks that it isn’t house made. 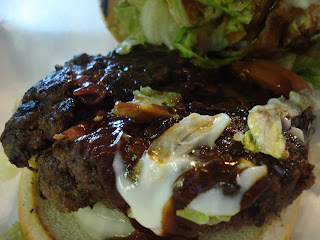 A feature of Sinbad’s burger is that it’s made with bacon. Yes, there are chunks of it in the patty, actually all of it is clumped in the middle of the patty, but it’s still turkey bacon. Sure you’ll save on fat and calories with turkey bacon, but you’ll lose on taste every single time. 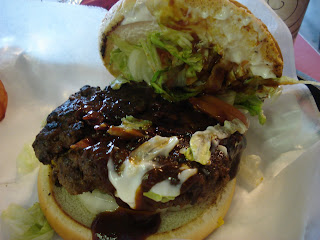 One thing that’s immediately apparent is that the Sinbad isn’t as good as the Cool Dell burger. The sauce clouds the beefy flavor of the patty, but it does a pretty good job of hiding the subpar bacon.

I’ll admit, I sold Cool Al’s a little short during the bacon cheeseburger quest. When you scale the burgers down to a normal size, they are much more manageable and much better. However, I still think there are better burgers to be found in , and I’ll never stop harping on the bacon issue. On a closing note, I was surprised that even when I stuck to the smaller burgers, the patties at Cool Al’s still fall apart like it’s their job. Maybe Cool Al’s is using the wrong lean to fat ratio beef, whatever it is, it makes eating the burger more challenging than it should be.