With roughly 6 quarts of light chicken stock on hand, I was now ready to start making “Sweet Corn and Chicken Soup”. Where else do you start but with corn? 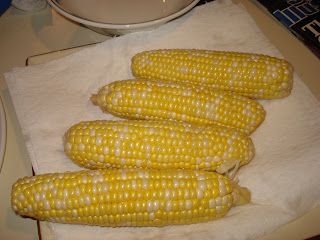 Being January, sweet corn can be a little hard to find. This is just mixed corn from Fresh Market.

After a little knife work, I had the corn and the rest of the ingredients ready. 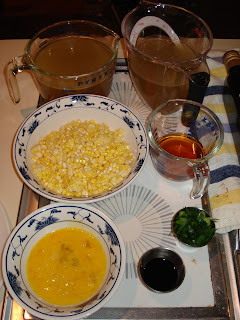 Starting at the top, there is 7 cups of light Chinese chicken stock, then working clockwise I had ½ cup shao hsing wine, 1 tbs sliced scallions, 2 tsps light soy sauce, 2 eggs lightly beaten, and finally 4 corn cobs worth of kernels that I had cut from the cob.

Of course, that wasn’t everything. 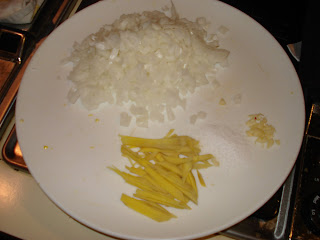 1 small, white onion had been diced along with 1 clove of garlic. A 2 inch piece of ginger had been peeled and julienned and last was 1 tsp of sea salt.

Now that everything had been sliced, minced, and measured, I was ready to start with 2 tablespoons of oil in a heavy bottom pot over medium heat. 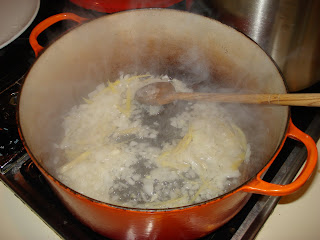 The onion, ginger, garlic, and salt are sautéed for just a minute before it’s time for the shao hsing wine. 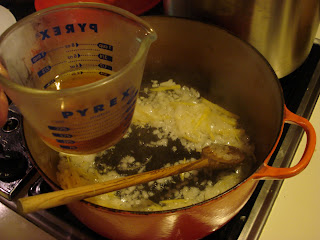 Half a cup of shao hsing wine goes into the pot. 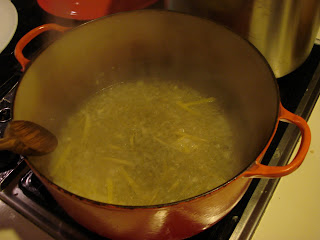 At this point, I’m waiting for the liquid to reduce by half. 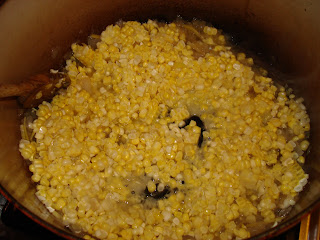 With the wine half reduced, the corn is now added to the pot. 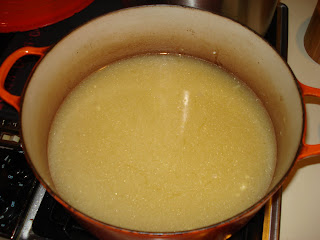 And the 7 cups of light Chinese chicken stock. The pot is brought to a boil, reduced to a simmer, and then left to its own devices for 30 minutes.

It just wouldn’t be a soup if I didn’t try to skim off any scum/impurities. 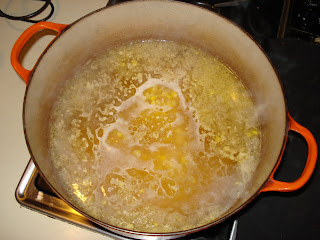 30 minutes have passed and I’m ready for the chicken and soy sauce. 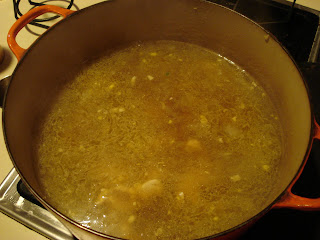 One chicken breast has been cut horizontally into ½ inch slices and added to the pot along with the 2 tsps of soy sauce. This is only simmered for a minute before the last ingredient is added. 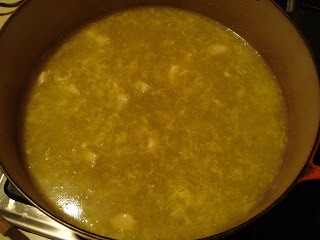 You’d almost forgotten the 2 beaten eggs hadn’t you? With the soup still simmering, the eggs are poured into the soup in a slow stream, all while stirring the soup. I was sort of hoping for the big pieces of egg like you see in buffet egg drop soup, but these are much smaller egg pieces.

Like almost everything Asian, this soup is garnished with a little green onion. 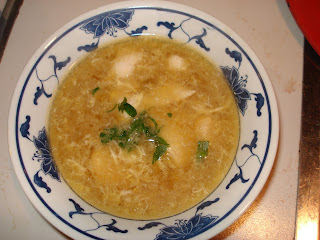 What’s the verdict? I suppose I was expecting something much thicker, more along the lines of buffet style, but this soup was a pleasant surprise. There’s a real depth of flavor and overall this soup is a definite plus for the cold weekend.