As far as I’m concerned, there’s no such thing as a bad time for gumbo. However, when there’s a chill in the air, a bowl of gumbo can be right for what ails you. Of course, there’s then the problem of what recipe do I use? Sure I could wing it and come up with my own gumbo, but I decided to see what sort of gumbo Donald Link had to offer in his book “Real Cajun”. With a whole pound of andouille from Cochon Butcher in New Orleans, it seemed only fitting that I try Link’s Fried Chicken and Andouille Gumbo.

Even after I read the recipe, I was still a little surprised at the first steps. 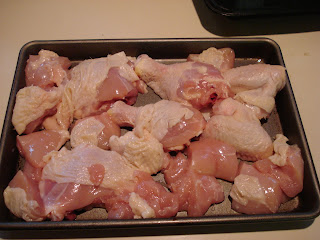 First a chicken was cut into eight pieces, but then I had to cut the breast meat into 2 inch pieces. 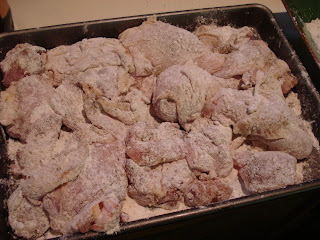 Next the chicken was seasoned on both sides with salt and pepper and then dusted with flour on both sides. It almost goes without saying that the excess needed to be shook off.

I always fry my chicken before putting it in gumbo, don’t you? Anyway, 1 1/4 cup of vegetable oil was heated to 350 in one of my cast iron skillets. 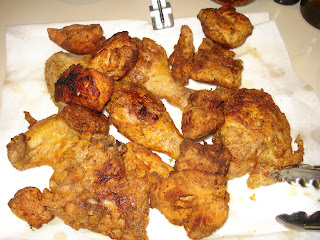 The idea was just to cook the chicken until it was golden. True to the recipe, this only took about 3 minutes per side.

Now it’s time to start to the heart of the gumbo, the roux. 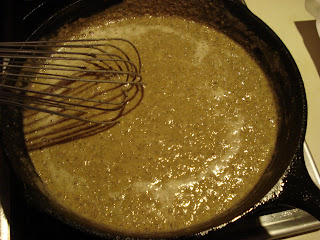 1 1/2 cups of flour were added to the oil on medium high. 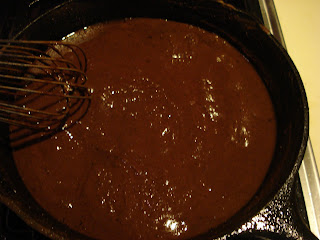 With time and plenty of whisking, the roux darkened and I lowered the heat accordingly. After 30 or so minutes, I got that dark brown color I was looking for and moved to the next step.

Instead of adding in all the vegetables at once, I took a page from John Besh’s “My New Orleans” and added the diced onion in first. 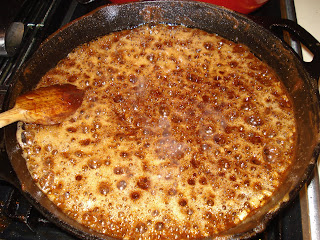 In addition to caramelizing the onions, I don’t think there was enough room in the pan for all the veggies.

Once the onions had taken on a little color, I moved everything to a dutch oven and added in the rest of the vegetables. 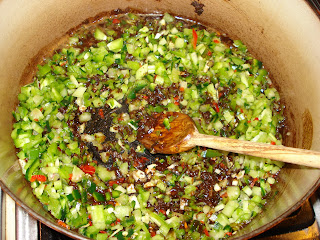 However, I couldn’t forget the spices. 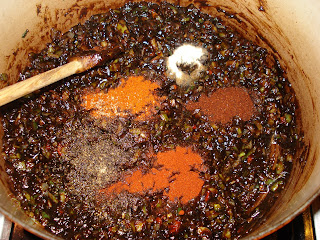 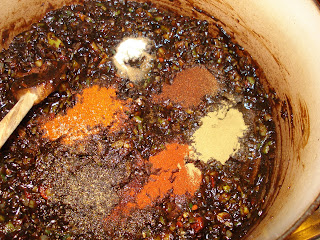 With all the vegetables and the seasoning in the pot, I took it off the heat for a minute and turned my attention to the chicken broth. 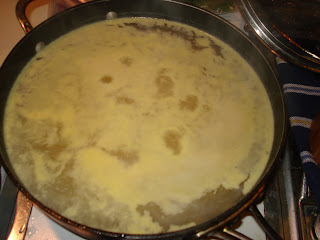 3 whole quarts were warm and ready to go. 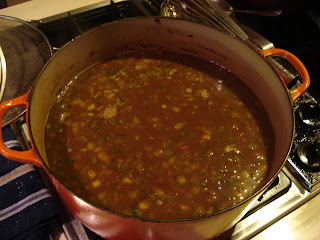 As soon as the broth was added, the heat was turned to medium-high and I waited for the pot to come to a boil. One thing Link made sure to point out was the need to whisk as the roux can easily stick to the bottom of the pot.

Once the pot came to a boil, 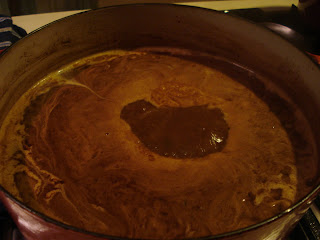 I lowered the heat to low and let it simmer for a good 30 minutes. I’ve never seen a pot of gumbo look like this. 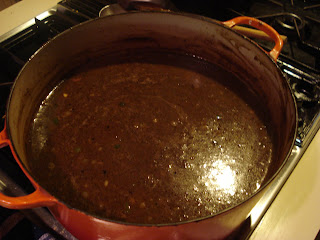 30 minutes later, it was time to add the chicken. 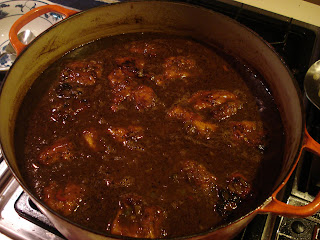 Another 45 minutes of simmering later. 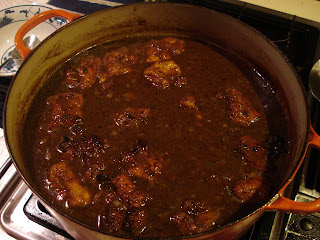 So far there hasn’t been a lot of oil to skim off the top, but now it’s time for the andouille.

Here we have the star of the show. 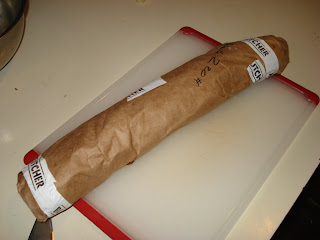 and now without the wrapping paper. 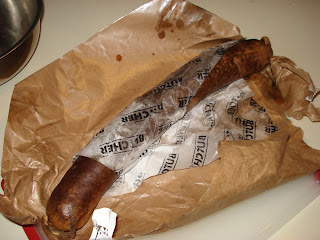 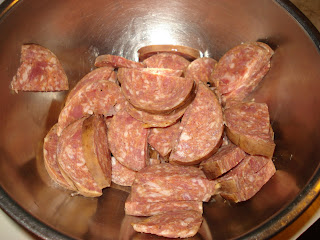 Sliced into 1/2 inch half moons, the andouille went into the waiting pot. 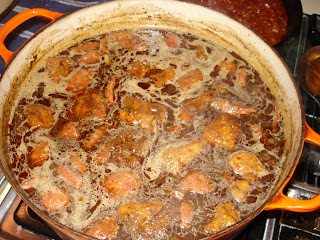 In the next hour of simmering, the rest of the oil came as well.

At this point, I thought the last step seemed unnecessary, but I forged ahead with Link’s instructions. 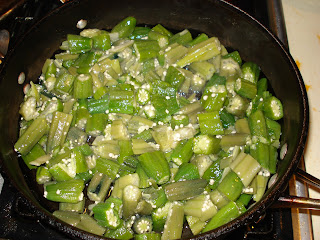 I took 3 cups of sliced okra and did my best to saute it with 2 tbs of oil over medium-high heat. Link writes that 8 minutes of cooking or until it’s lightly browned and the gooey slime has cooked out. This is okra, I don’t think I’ve ever seen the gooey slime cooked out. 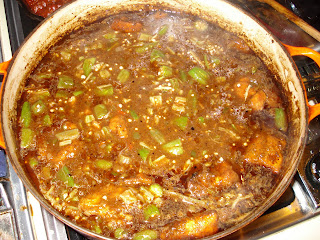 Anyway, I added the okra into the gumo and simmered the required extra 15 minutes. Believe it or not, I started prepping for this gumbo nearly 6 hours ago. Of course Link gives the very opened instructions for when the gumbo is done : “The gumbo is finished when there is no more oil rising to the top.” I soon decided the oil had stopped rising, mainly because I was tired and wanted to eat.

Once I had a bowl of gumbo in hand, I gave it a try to see if my hard work had been worth it, 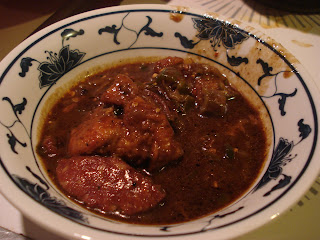 The first thing I noticed is there was a depth of flavor that you just can’t find in most restaurant gumbos. 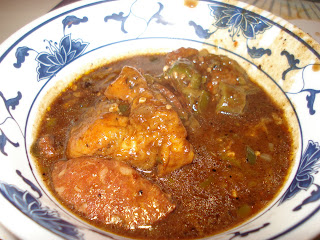 Also, the chicken was fall apart tender and the andouille was delicious. Of course, there were a few things that left me wondering. Why have both file powder and okra? I was under the impression that they’re both thickeners and that using both is a real no-no. Why fry the chicken first? I know that meat is seared to build flavor in most dishes, but I didn’t seen any huge benefit to frying the chicken. However, the real shocker is that Link didn’t mention rice anywhere in the dish. Nevertheless, the result was worth all the effort, and I’ll keep Link’s “Real Cajun” close at hand.

Looks really good. I always heard to not add file and then boil. It should be added only at the end or at the table. Cant remember the reason.

Some say that boiling the file will keep it from having the "thickening" effect that many desire.