Every now and then, I get tired of cooking beef, chicken and pork. I realize that could count as sacrilege in some culinary circles, but I had fish on my mind. So after work, I stopped into Paul Anthony’s to see what sort of bounty of the sea they had on their fish counter. I know that it’s not a sustainable fish, but a nice sea bass filet caught my eye. With fish in tow, I headed home to make something resembling dinner.

I had a rough idea of what I wanted to do with my fish, I was thinking steamed Chinese style. Having had a good measure of success with steaming lobster, I turned to my copy of Eileen Yin-Fei Lo’s cookbook, “My Grandmother’s Chinese Kitchen”. Wouldn’t you know, I found something right up my alley with her recipe for Steamed Fish or Jing Yue.

Right off the bat, I had to modify the recipe. 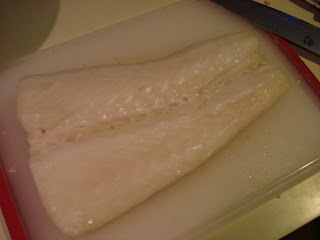 Lo called for a 1 1/2 pound fresh whole striped bass, and as you can see, I just had a large filet. Ignoring this little detail, I decided to cut the filet into large chunks.

Now it was time to work on that marinade. 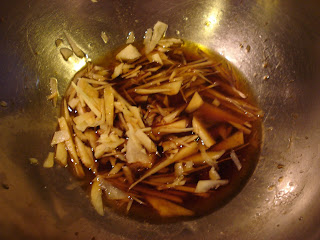 The fish was quickly introduced to the marinade and left to soak it all up for 10-15 minutes. 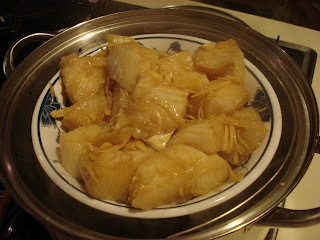 After a quick marinade, the fish was ready for the steamer.

10 to 15 minutes of steaming and I was ready to see how the fish had turned out. 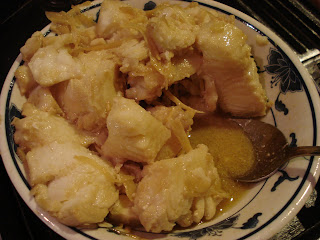 At first glance, this dish looks to have been a great success.

I’ll admit, I was feeling lazy. I didn’t feel like getting putting the extra tablespoon of scallion oil on the fish, or the sliced scallions, or the sliced coriander. 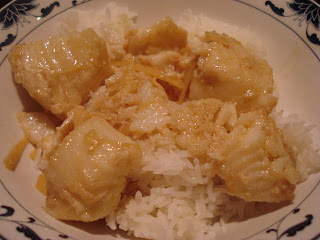 Even with my laziness, I think it turned out well. The fish was flakey, tender, and not at all overcooked. Thankfully, even with my inaction, the marinade has turned out perfectly. So, with minimal work, I had ended up with a dynamite dinner, thanks to Lo and her great cookbook.