Just before Thanksgiving, I was in and it was cold. So cold that it seemed like a good night for soup. I don’t know what made me think of it, but I proposed Shoya Izakaya for dinner. So in a matter of minutes, Jennifer, Aaron and I were on our way to the Shoya.

This was only my second time at Shoya Izakaya, the first being back in June (http://cynicalcook.blogspot.com/2009/07/shoya-izakaya-atlanta.html), but it was a pretty spectacular meal, so I had high hopes.

Looking to try something different from last time, we started off with the takoyaki or deep fried dumpling ball with octopus pieces. 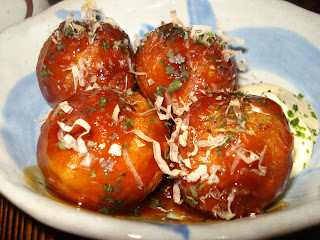 I was halfway expecting something like the onigiri we had last time, but instead of nothing but dough there were big chunks of very tasty, but slightly chewy octopus inside each ball. Yes, each ball was more than a little doughy, but with a surprising amount of meat and a good sauce, this was the right way to start a meal.

Having come to Shoya Izakaya for a good bowl of soup, I had to know what the soup of the day was. Luckily it was a mushroom and miso soup, something right up my alley. 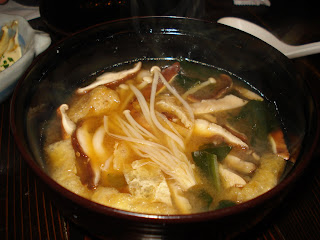 First thing you notice is just how many mushrooms there are. There’s shitake, enoki, and a few others buried underneath. It’s a far cry from the 2 or 3 I was expecting. With so many different mushrooms there was a huge amount of flavor in this simple soup. It was just what I was looking for.

The first time I ate at Shoya Izakaya, I was disappointed by the gyoza, mostly because they fell apart on me. There was none of that this time. 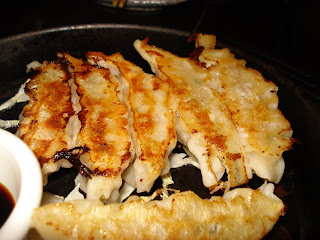 Unlike before these gyoza stayed in one piece and they had a porky flavor to them. 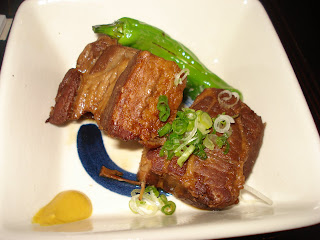 Buta-kakuni or stewed barley pork belly with sweet soy sauce was a solid choice by Aaron. It was odd to see such a meaty piece of pork belly, but a by product of that was the belly was a little dry. However each bite was full of great, but not overpowering soy flavor making this another favorite.

Revisiting another choice dish, we ordered the hamachi-kama too. 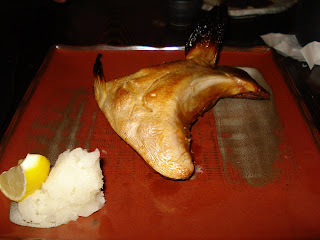 Like before this was an excellent dish. Unfortunately, I missed out on a piece of the well seasoned skin. As a result, I got the slightly bland end of the stick. So what’s the moral of the story? Attack each dish and get that best piece for yourself. Sure it’s not polite, but it sure is tasty.

Yakisoba, the pan fried noodle favorite was next to the table. 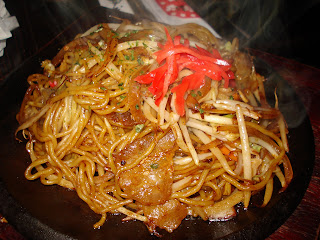 There wasn’t a lot of meat to this dish and yes it was a little greasy, but that doesn’t stop it from being simple and satisfying. This is just noodle comfort food.

It would seem a little odd to visit Shoya Izakaya with getting a few items from the kushiyaki menu. 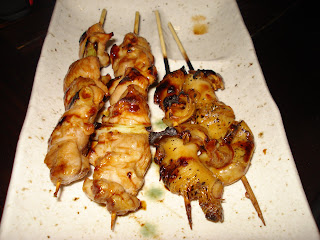 Seeing as we got everything with sea salt last time, we went for the teriyaki topping for this meal. On your left is the standard chicken and scallion or chicken yakitori as I know it. Nothing too exciting here, but the chicken was moist and the teriyaki sauce a well done compliment. On your right is an order of Japanese conch. I’ve never really had conch outside the , so I was delighted to find each piece to be chewy but very tasty. Conveniently, the teriyaki went very well with the seafood and didn’t overpower it at all.

Last but not least is something a little spicy, the pork kimchee. 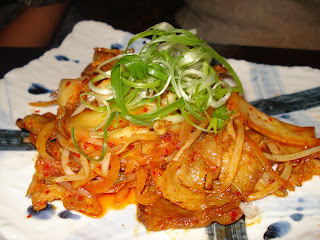 Like the yakisoba there wasn’t too much in the way of meat in this dish. However it was good and spicy, with plenty of cabbage and noodles giving you every opportunity to stain your shirt.

There is one thing that I find inherently annoying about Shoya Izakaya. It’s a little out of the way for dinner. If this was in Buckhead, I’d be at least once a week. On the other hand, it’s distance makes each visit seem like a bit of an occasion. Hopefully one I won’t wait another 6 months to enjoy, but I have a feeling I’ll be by Shoya Izakaya a little more often. Despite the economy, a new Super H Mart opened in the same shopping center. Maybe it’s just me, but I think a few kushiyaki and a little ethnic grocery shopping sounds like a fine combination to me.