I’m on the road to Atlanta again and, almost like clockwork, I hit Tuscaloosa right around lunch time. Armed with a few reader recommendations, I make my to University Boulevard for a little Thai food. Having eaten at Surin of Thailand last time, I felt compelled to try their cross street competitor Ruan Thai.

Pulling into the parking lot, Ruan Thai is immediately endearing for its kitsch. Located in a converted home, Ruan Thai has a much more genuine feel than the chain Surin. Taking a quick seat at the bar, I get a menu and start perusing. It’s refreshing to see that Ruan doesn’t serve sushi. I have nothing against sushi, but I always roll my eyes when a restaurant tries to do too many things at once.

With a little chill to the air, I’m more than a little grateful that the meal starts with soup. 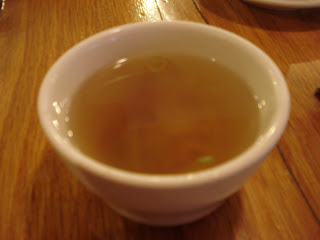 Yes, more difficult to photograph white bowls of soup. Honestly, there’s not much to this cabbage soup. In fact, it seems like vegetable broth with some cabbage and black pepper. Still, it works its magic and has me warmed up in no time.

After a few questions and recommendations from my waiter, I’ve got an appetizer on the way. 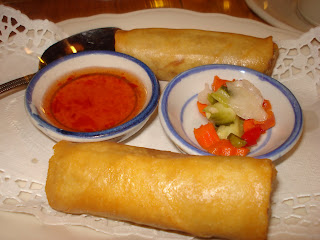 It’s hard to go wrong with Thai spring rolls , especially ones that tout themselves as homemade with chicken and mixed vegetables. 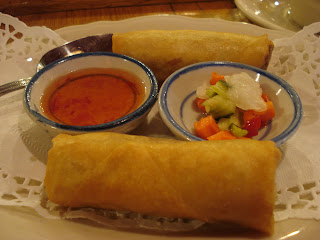 Fresh from the fryer and stuffed to the gills, these are some pretty good spring rolls. 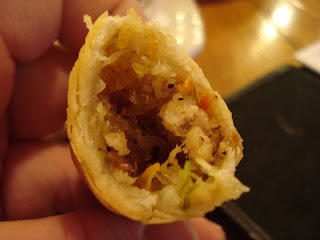 You can see there isn’t a lot of chicken inside, really just enough to give it good flavor. Still, with a little sriracha, I’m immediately a fan.

Chicken with fresh garlic or Kai Kra Tiem is up in no time. Described as sautéed chicken with ground garlic, white pepper, and sweet black bean sauce, I’m immediately a fan of how little filler there is on the plate. Although, the ice cream scoops of rice make it seem like a Picadilly plate. 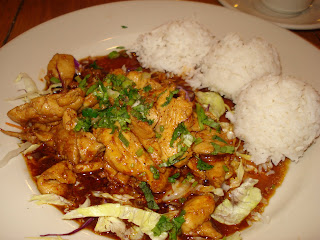 Having asked for Thai hot, I was pleasantly surprised to find the sauce to have a good flavor and nice dose of heat. 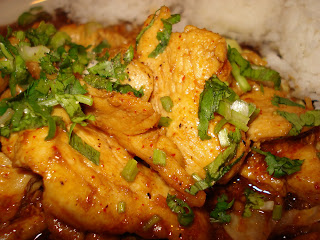 I had to get past all the cilantro before I could get to the chicken and I was annoyed to find it more than a little dry and tough. Even with the overcooked chicken, this was a very pleasant dish. The cabbage provided a nice touch of texture and not just the role of filler, and with the spicy sauce, the whole dish worked. In fact the worst part of the meal was the silverware. 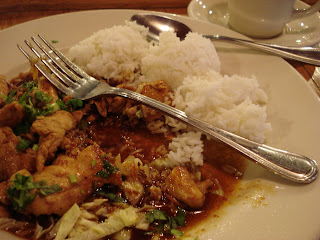 I know that’s an odd thing to say, but the fork they gave me was huge. It was almost the size of the plate and more than a little cumbersome.

So, first it was too little chicken, then too dry a chicken. It seems like I didn’t exactly strike gold with Ruan Thai. However, that’s far from the case. Sure, some of the parts were subpar, but overall the meal was a nice respite from the road and at only $14, pretty good value. I’ll have to give Ruan Thai extra credit because they can make things spicy, unlike their chain restaurant neighbor. The real test will be the next time I stop in. Will the meat be overcooked? Will the service be as courteous and accommodating? Will I skip Tuscaloosa Thai food completely and take readers’ suggestions for bbq? I’ll be on my way to Atlanta later in the month, so we’ll see.

If you go back, you must try the tom kha gai!