Jon is completely to blame. It was Jon who told me to first go to J’anita’s on Magazine Street and to try their redfish sandwich. That was before I started this endeavor so there aren’t any pictures or reviews to reference. However in August, the sad news came that J’anita’s had closed, but there was light at the end of the tunnel. An anonymous reader informed me that J’anita’s had moved to the Avenue Pub on St. Charles. With that in mind, Jon, his sister Liz, and I were in New Orleans a few weeks ago and Jon was dead set on eating at J’anita’s.

It’s hard to walk inside a pub and not have a drink. 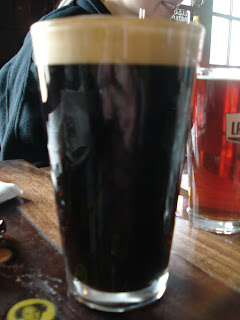 Lazy Magnolia’s Jefferson Stout is apparently made from sweet potato cream. I had no idea that Lazy Magnolia made a stout, and a pretty decent one at that.

Being a cold day outside, at least for , I wanted something meaty and filling. With pulled pork, beef brisket, and bbq slaw, the swamp reuben seemed to fit the bill nicely. 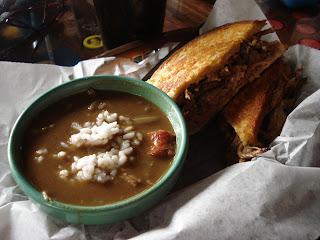 I had opted for a side of gumbo too. 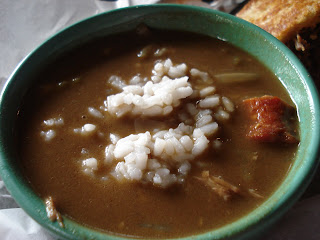 Even with a nice touch of heat, cayenne I think, this was a disappointing, watery gumbo. Sure there were big chunks of sausage and veggies, but there was no depth of flavor. 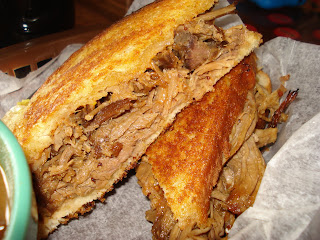 The first thing you’ll notice about the swamp reuben is a lack of bbq slaw. My rationale is that a reuben traditionally features sauerkraut, so why mess with a classic by adding bbq slaw? I know it’s faulty logic, but I really just wanted a meat sandwich. To begin, the bread was both deliciously buttery and crunchy and inside was a metric ton of pulled pork and brisket. There wasn’t anything exceptional about the bbq here. There was no smoke ring, no huge smoke flavor, but it all just worked and it worked well.

Jon might rave about the redfish sandwich, but I’ll have to recommend the swamp reuben, it’s up to you if you keep the slaw on top. Either way, I’m sure I’ll visit J’anita’s again soon.