It’s taken a few years, but Five Guys has finally hit the Jackson metro area. Yes, that familiar pattern combination of red and white décor complete with bags of peanuts and potatoes has found a home in the Renaissance Mall in Ridgeland. Suddenly rumors abounded of lines out the door for lunch and dinner. I chalked that up to new restaurant syndrome. Surely people remember when P.F. Chang’s opened its doors in 2007. 30 minutes to an hour for sodium drenched Americanized Chinese food, but people waited, simply because it was something new.

When I stopped by Five Guys for lunch, there were no 20 minute waits to order. There was simply that familiar atmosphere that I had enjoyed in D.C. Yes, Five Guys is a D.C. area chain and it was one that I enjoyed often while I was in school. Nostalgia aside, I have always enjoyed that board alerting the customers of the origins of that day’s potatoes. That day, I was going to enjoy French fries from Shelley, Idaho.


With my order placed, I stopped by the open box of peanuts. 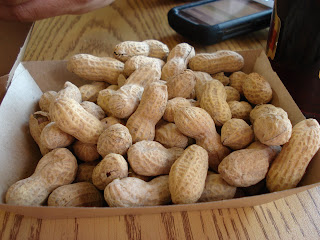 I don’t know why I get the tray of peanuts. I never have time to eat more than 3 or 4 before my order is ready. Sure enough, that holds true, even in Mississippi.

After getting my brown paper bag full of food, I ripped it apart and set to work. 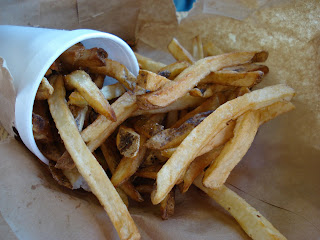 There’s always one thing that’s bugged me about Five Guys’ fries. Yes, you get a lot of potato for the money, and each location has plenty of malt vinegar to make fries that much better. However, the fries are always just a little blasé. They’re all cooked through, but there’s not even a crisp end, it’s just a overflowing cup of limp French fries.

Fries are all well and good, but people go to Five Guys for the burger. 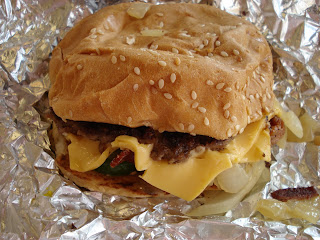 A bacon cheeseburger with grilled onions and jalapenos is always a ticket to a great meal. Yes, there’s no mention of apple wood or hickory smoked bacon, and that’s just a simple slice of American cheese, but it all works. The burger is simple, beefy, consistent, and honest.

There’s no pretention of being a gourmet burger, but you can walk into any Five Guys from New York to Jackson and get the same quality patty. True that’s the formula for most fast food chains, but Five Guys takes their idea, adds better products and makes it work. I won’t say that Five Guys is my favorite burger, but if I’m on the road and I have a choice between the standard burger chain and a Five Guys, I’ll pick the DC boy any time.